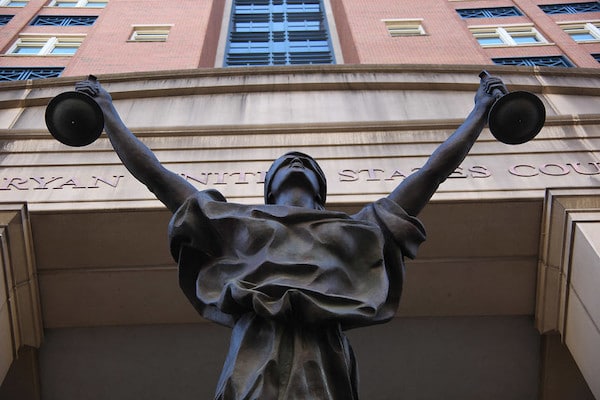 Every legal community that embraces the ideal of rule of law aspires to certain principles—fair trials, neutral judges, and freedom from punishment without legal process answering to some kind of preexisting law. In shorthand, we say that the opposite of the rule of law is “the rule of men [persons]”—that is, arbitrary power in the hands of individuals. In the United States, however, that ideal has always had property rights as its lodestar; its requirements typically have been translated through terms that focus on private property as the most central legal interest which requires protection. In our contemporary law, for example, the core way in which we secure any legal right the government happens to grant someone (at least since Goldberg v. Kelly) is to assimilate it to a property right under the Due Process Clauses. Similarly, the U.S.-driven “Washington Consensus” program of international development, which pairs the rule of law with capitalist economic reforms, represents the chief virtue of the rule of law as its capacity to provide security of property and contract for investors.

The pride of place granted property has been a core feature of American legalism since the Revolution. Historians such as Gordon Wood and J.G.A. Pocock have long identified how the republican ideology prominent in the founding generation closely entwined property with citizenship itself. More recently, Aziz Rana’s pathbreaking analysis has made evident the relationship of property and economic independence to what he calls a settler conception of freedom.

But attending to our history also reveals the dangers of a property-first conception of the rule of law.

As I describe in my new book, The Rule of Law in the United States: An Unfinished Project of Black Liberation, the priority of property within the American rule of law allowed defenders of slavery to see themselves as defenders of the law, rather than as a regime of lawless brutality. Despite the fact that the American revolutionaries were heirs to an English ideology that identified subjection to the arbitrary power of tyranny with slavery—a rhetorical trope known to intellectual historians as “anti-tyrannicism”—they were seemingly unable to see that the rule of law institutions they were building were radically inconsistent with the regime in the South.

This blindness comes, I argue, from the representation of slavery as a form of property. By highlighting the traditional importance of property rights, enslavers and their defenders were able to draw on rule of law values to defend their arbitrary power. For this reason, the antebellum literature of the South is replete with appeals to property and condemnations of the lawlessness of abolitionists. The Lecompton (pro-slavery) Constitution of Kansas could thus declare its alignment in just those terms: “the right of property is before and higher than any constitutional sanction, and the right of the owner of a slave to such slave and its issue is the same and as inviolable as the right of the owner of any property whatever.” And the Supreme Court in Dred Scott v. Sandford could strike down the Missouri Compromise on the logic that Congress was depriving enslavers of their property in the territories.

In this way, the American rule of law revealed itself to be self-defeating from the outset. Slavery represents perhaps the apotheosis of “the rule of men,” as the state confers on one individual completely untrammeled power over another human—in many cases up to the power of life and death itself. Even if such power is implemented through the form of law, we ought not to say that it in any way constitutes “the rule of law.” Nor should we say that such a system, which carves out a sphere of interpersonal coercion intentionally beyond all legal restraint, remotely resembles a genuine legal order itself. (I recognize that this claim is controversial among historians and scholars of slavery—should it trouble you, please see my new book for a defense.) Yet the fundamental protections of the American rule of law—because of its hyper-focus on property—could be persuasively wielded in its defense.

More recent black freedom movements have also often been confronted by appeals to property rights couched in the language of the rule of law. For example, in 1964, Justice Black’s dissent in Bell v. Maryland declared that participants in a lunch counter sit-in were “substitut[ing] rule by force for rule by law” by “forcibly invad[ing]” the property of others. Today, we’re perhaps most familiar with this phenomenon in the form of conservative critics of Black Lives Matter protesters, who point to property destruction at protests of police killing in order to argue that the Movement for Black Lives is facilitating “a breakdown in the rule of law,” or are “terrorists”. This rhetoric is even used to justify legislative crackdowns on protests. Thus, property rights are raised as a shield against a movement of protesters trying to secure the core element of the rule of law—security against arbitrary violence by the state—for themselves.

Moreover, while slavery is a particularly stark example, the tension it illustrates between property rights and the rule of law can be expressed in more general terms. Property rights are by their nature state-created power—licenses to dictate the choices of other people within the domain encompassed by the property right.

Thus, to the extent our law confers broad property rights on a person, it increases the likelihood that person will have the capacity to exercise arbitrary power over others who come into contact with their property. For example, in a Supreme Court case from just this past year, Cedar Point Nursery v. Hasid, the Court struck down a California law permitting labor union organizers to enter the property of agricultural employers to talk to their employees. According to the Court’s reasoning, this regulation authorized a physical invasion of the employers’ land, and hence required compensation under the Takings Clause. In effect, it expanded the property rights of agricultural landowners by invalidating a limitation on those rights in state law. And, in consequence, it increased the danger that those landowners may exercise arbitrary power.

The danger of arbitrary power posed by Cedar Point Nursery is not just hypothetical or academic. Many agricultural employees live on their work sites; many are migrants, often with limited English and little knowledge of their legal rights. In response to the vulnerability of these workers and the characteristic forms of exploitation (such as wage theft) they suffer, legal aid organizations routinely send personnel into agricultural labor camps to inform workers of their rights. (I participated in such visits myself many years ago as a legal aid lawyer). These visits are protected by law in a number of states, and have been the object of controversy for at least half a century. Some legal aid organizations have argued that this right of access is required by international human rights law. The Supreme Court’s decision in Cedar Point Nursery puts this access—and thus migrant farmworkers’ capacity to be informed of their legal rights at all—at risk. In other words, Cedar Point Nursery protects the property rights of farmers by endangering every other legal right that their workers might happen to enjoy—including rights against the farmers themselves, such as the right to be paid the wages they have earned.

Other examples abound. Here’s one more: an individual’s lack of property, particularly real estate, facilitates a variety of derogations from the rule of law. Prominent among these is the way that the states continue to evade the Fourth Amendment with respect to those who do not own property—for example, by attempting to use their status as landlords to conduct warrantless searches in public housing, or, even more troublingly, making use of nuisance ordinances to pressure private landlords to evict troublesome tenants, such as when police forced Lakisha Briggs’s landlord to evict her to punish her for calling 911 to report domestic abuse. And the homeless are distinctively vulnerable to police harassment in virtue of their lack of access to private space where the police may not enter.

Yet perhaps there is a bright side. While America’s legacy of slavery shows how property rights can lead to lawless oppression, it also suggests how they can be deployed to resist it as well. The innovation of Goldberg v. Kelly—treating the economic interests of the poor as property, just like the economic interests of the rich have always been—was only the most recent effort to expand the scope of property rights protections to incorporate the subordinated. When freedpeople demanded forty acres of land after the Civil War, they weren’t merely attempting to secure economic independence, but also full political and legal inclusion as republican citizens. Had that demand been met, it would have been much more difficult for the South to effectively re-enslave them through measures such as “apprenticeship,” vagrancy laws, and convict leasing. Later, in the early 20th century, it is not coincidental that many of the first strides in using the Fourteenth Amendment to combat racial oppression came through the vehicle of property rights—decades before Smith v. Allwright and Shelley v. Kraemer, for example, the Supreme Court struck down a racial segregation ordinance in 1917’s Buchanan v. Warley on the grounds that it deprived the (white) seller of the right to transfer his property to a black purchaser without due process—and in Shelley itself, the Court’s opinion is filled with rhetoric expressing the priority of property rights within the scope of the Fourteenth Amendment’s protections.

Those who wish to secure the protections of the rule of law for all, who cherish the ideal of universal freedom from violence and from arbitrary power, have a choice. They either must combat the priority of property at the heart of American legal ideology, or they must work to promote the expansion of the property to include the interests of the excluded and subordinated, as well as the included and privileged.

Paul Gowder is Professor of Law at Northwestern University Pritzker School of Law. He is author of The Rule of Law in the United States: An Unfinished Project of Black Liberation.