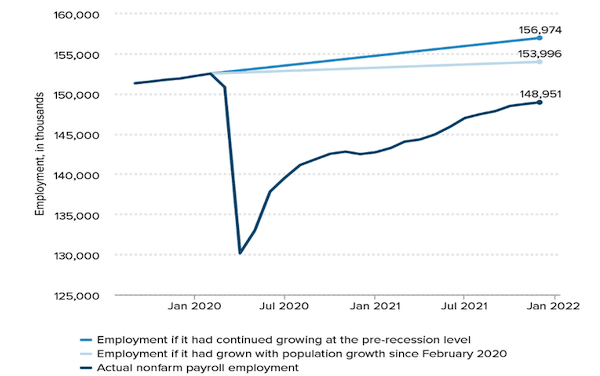 There appears to be growing consensus among economists and policy makers that inflation is now the main threat to the U.S. economy and the Federal Reserve Board needs to start ratcheting up interest rates to slow down economic activity. While these so-called inflation-hawks are quick to highlight the cost of higher prices, they rarely, if ever, mention the costs associated with the higher interest rate policy they recommend, costs that include higher unemployment and lower wages for working people.

The call for tightening monetary policy is often buttressed by claims that labor markets have now tightened to such an extent that continued expansion could set off a wage-price spiral. However, the rapid decline in the unemployment rate to historically low levels, a development often cited in support of this call for austerity, is far from the best indicator of labor market conditions. In fact, even leaving aside issues of job quality, the U.S. employment situation, as we see below, remains problematic. In short: the U.S. economy continues to operate in ways that fall far short of what workers need.

A turn to austerity to fight inflation is not what we need. Neither is a continuation of policies that simply continue the growth of our currently structured economy. Instead, we need new policies that can transform our economy with the aim of employing more people, working significantly shorter workweeks under conditions that are humane and fulfilling, for a living wage, producing and distributing the goods and services required to meet majority needs in socially and environmentally sustainable ways.

It is important to recognize how limited the economic recovery has been in terms of job creation. As Elise Gould notes,

Most of the vital fiscal stimulus provided in 2021 has now faded while the labor market is still nearly 3.6 million jobs below pre-pandemic levels and is facing a shortfall in the range of 5 to 8 million jobs when taking into account population growth and/or pre-pandemic trends.

And while the unemployment rate has fallen to an impressively low 3.9 percent in December 2021, the labor force participation rate (which shows the percentage of the civilian noninstitutional population 16 years and older that is working or actively looking for work) tells a very different story. As we can see below, as of December 2021 the labor force participation stood at 61.9 percent, far below its early 2000’s peak of 67.3 percent. 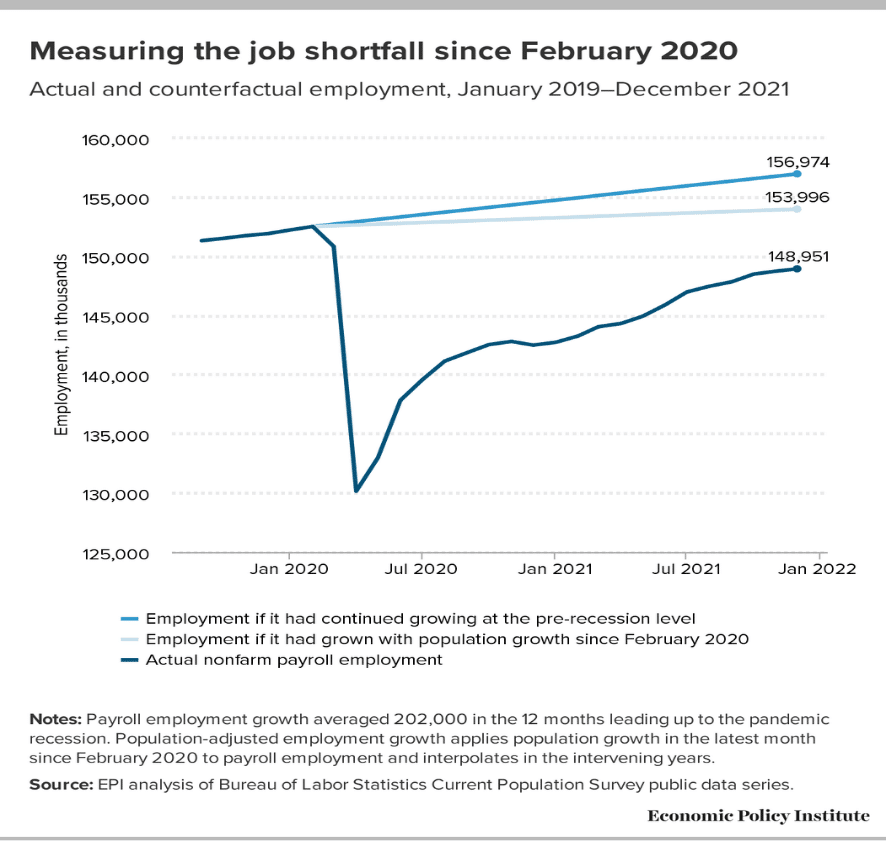 There are those that say that the current labor force participation rate paints a misleadingly negative picture of the tightness of the labor market. Many point to the fact of record high quit rates, which they say shows that many workers are “voluntarily” choosing to leave the labor market. Leaving aside the fact that many of those who quit did so because of health concerns or a lack of childcare options, the focus on quit rates alone produces a one-side picture of current labor market dynamics. 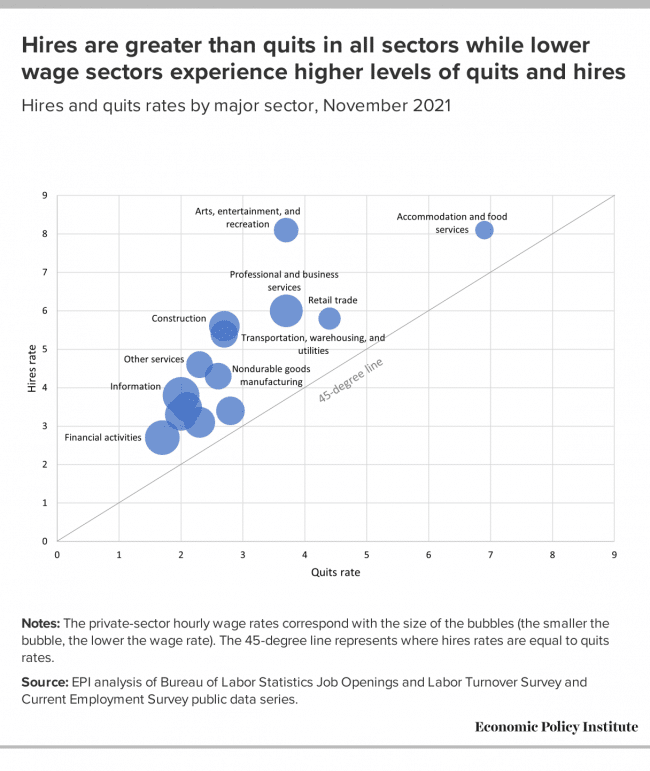 As Elise Gould points out:

As the following figure shows, hires are now greater than quits in all sectors of the economy. What we appear to have is a high degree of labor market mobility, with workers leaving one job for another (hopefully better) one. 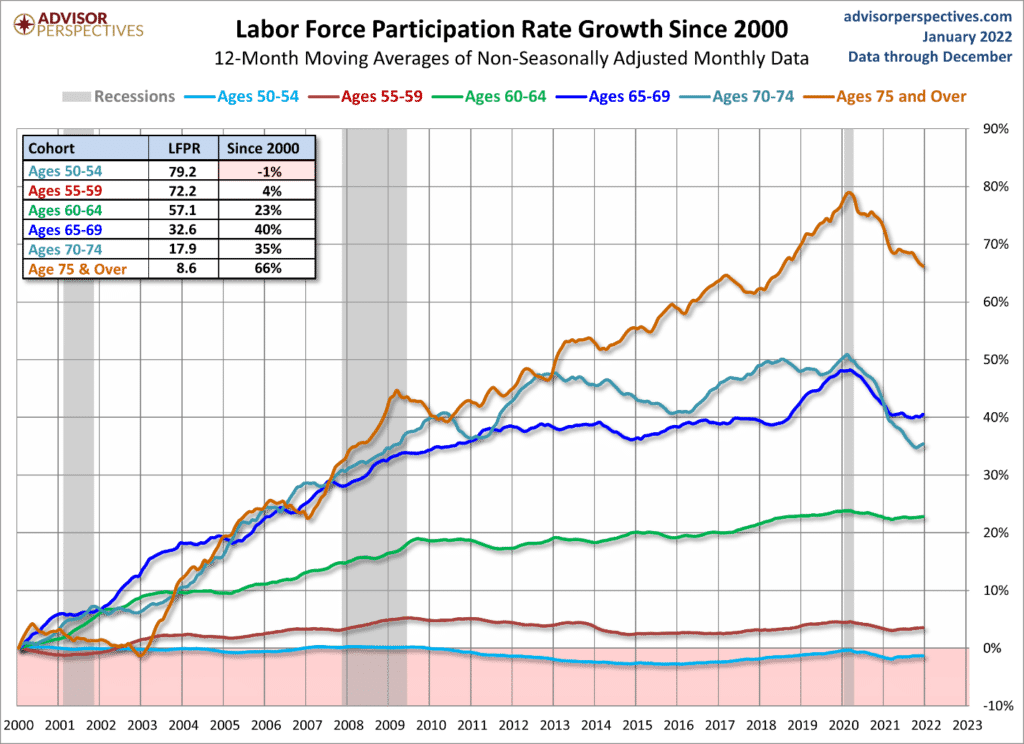 Perhaps the best way to appreciate the economy’s employment generating inadequacies is to look at the labor market experience of prime age workers, those between 25 and 54 years. As Jill Mislinski explains, 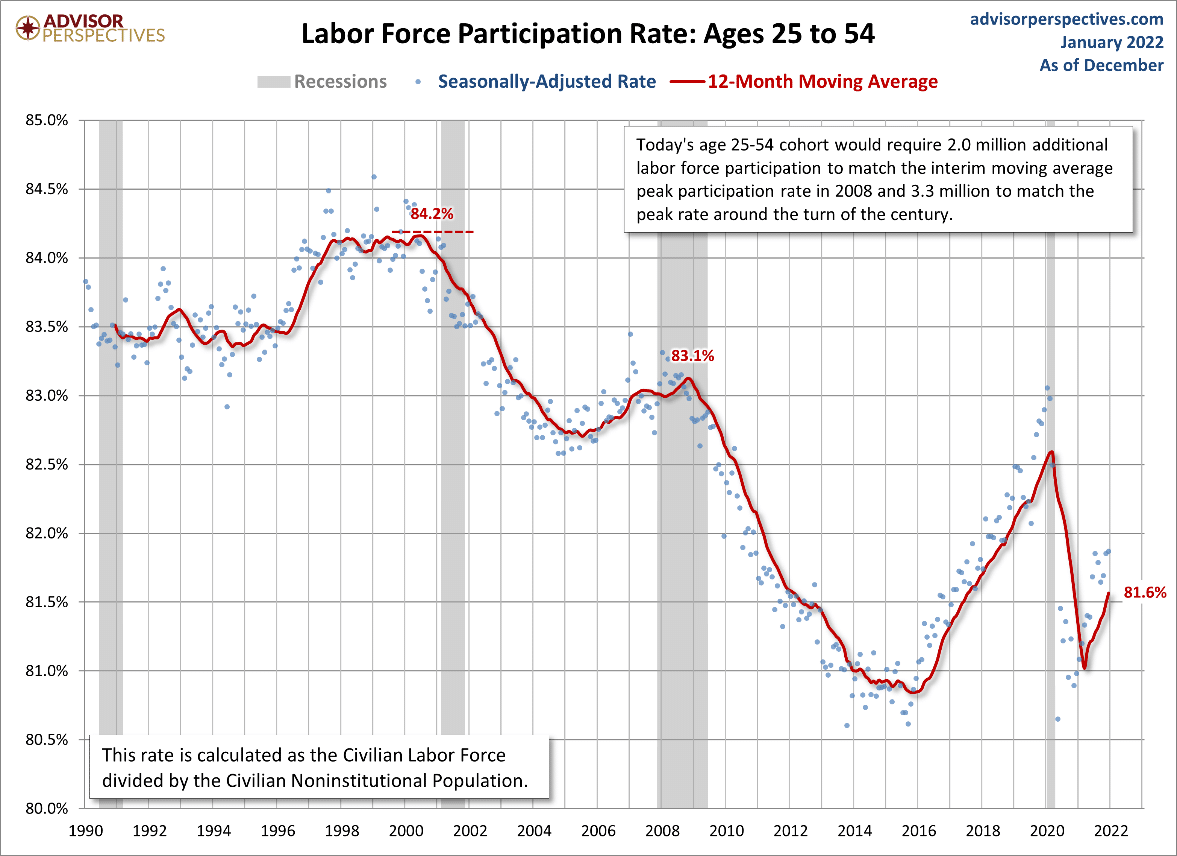 The employment-to-population rate for this cohort is probably even more telling. While the labor force participation rate includes both employed and unemployed workers in its calculation, this rate includes only those employed. As the inset box notes, the current age 25-54 cohort would require an increase of 5 million employed workers to match its earlier peak rate. 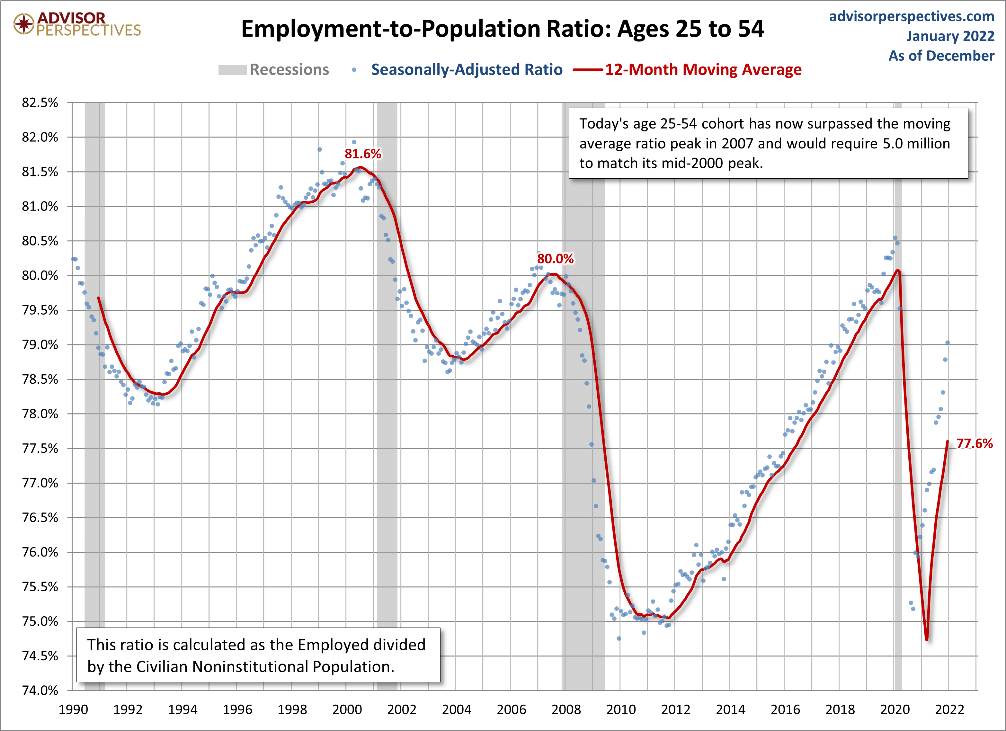 It is worth emphasizing that we are looking at prime age workers. It is hard to see how one could consider the U.S. labor market tight, meaning the economy is close to full employment, when millions of prime aged workers remain outside it. And it would take a very active imagination to believe that these workers have decided not to work because of their access to a generous government financed system of social support. The fact is that the low labor force participation rate and employment-to-population rate of this prime age cohort are indicators of just how poorly the U.S. economy is at generating acceptable employment opportunities. Policies designed to slow economic growth and, by extension increase unemployment, are clearly unwarranted.

Pandemic disruptions to the supply chain are the main cause of this recent spike in prices, something that is not unique to the United States. As Dean Baker describes,

The major auto manufacturers are getting around the chip shortage and ramping up production. Since the cost of producing cars has not hugely risen, we can expect most of the rise in new and used car prices to be reversed in the not distant future.

There are reasons to believe that the rate of inflation has peaked and is now heading down as supply chain disruptions are (at least temporarily) overcome, and demand itself slows. In fact, the Federal Reserve forecasts that its personal consumption expenditure inflation index will rise by only 2.6 percent in 2022, sharply down from an expected 4.4 percent in 2021.

Moreover, as Baker also points out, financial investors seem to agree with the Federal Reserve’s forecast of slowing prices:

The interest rate on 10-year Treasury bonds is just over 1.7 percent. This is not consistent with an expectation that inflation will remain near 7.0 percent. The breakeven inflation rate between normal Treasury bonds and inflation-indexed bonds is less than 2.5 percent. Financial markets can be wrong (see stock and housing bubbles), but at the moment they don’t seem concerned about runaway inflation.

In sum, we need to continue pushing back against calls for monetary tightening, and redouble our efforts not just to maintain current fiscal and monetary policies, with their modest expansionary impact, but to demand a more aggressive set of changes in how and in whose interest our economy operates.