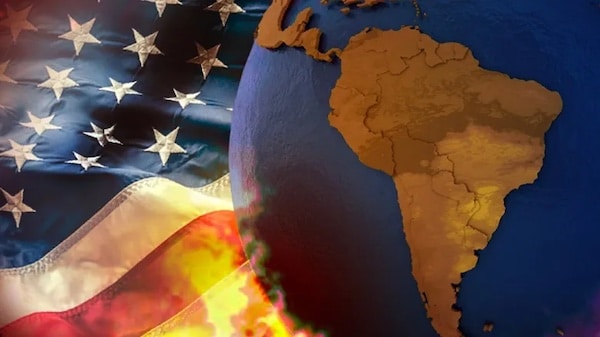 At a time when Washington and its Western allies are attempting to maintain a resolutely unilateralist approach, the Latin American countries that the United States has too long regarded as its backyard continue to deepen their strategic ties with the main pro-multipolar forces.

Sovereignist and pro-multipolar causes are increasingly gaining the upper hand in various parts of the world. Latin America is not an exception, on the contrary. Although–and this is evident–these processes are causing hysteria on the Washington side. And this is also true regarding the interaction of the countries of the region with China, Russia and Iran.

Concerning the interaction with Beijing, the volume of trade between the PRC and Latin American states in the period from January to September 2021 alone has reached 331.88 billion equivalent dollars, an increase of 45.5% year-on-year. By comparison, in the whole of 2002, the volume of Sino-Latin American economic and commercial exchanges did not exceed 18 billion equivalent dollars.

As the English-language Chinese daily Global Times also points out, an increasing number of countries in this region of the world have signed cooperation agreements or memorandums of understanding as part of China’s Belt and Road initiative, in the hope of joining China’s economic development train.

Global Times also responded to the criticism of the United States regarding this interaction, reminding the U.S. side that “such clamor shows a great lack of respect for Latin American countries, reflecting Washington’s arrogance in disregarding the sovereignty of Latin American states”.

Furthermore, the Chinese daily recalls that last year the United States announced that it would offer 4 billion dollars to “develop” Central America in order to “counter China’s influence” in the region. And this at a time when the infrastructure investment deficit in Latin America is estimated at around $150 billion per year. One should certainly and in passing add that this typical approach for the U.S. is reminiscent of the one already practiced in a certain country called Ukraine–plunged since the events of the 2014 coup into pure economic stagnation.

It is true that it is significantly easier to organize a color revolution at a lower cost, than to have to help the country placed under its orbit economically and financially. In the Ukrainian case, moreover, this is all the more anecdotal since Washington wants to keep the Ukrainian economy afloat via the Russian budget and, in particular, gas deliveries from Russia to Europe. Let’s move on.

In the case of the interaction of Latin American countries with Moscow, it would be fair to note that new perspectives will certainly open up. The Russian economic presence in many sovereign Latin American countries, especially in Venezuela in the energy sphere, could be expanded within the framework of a broader interaction in the military-security sphere, even if this is an area in which the countries concerned are already actively cooperating.

All this at a time when Russia’s recent dialogue with the U.S. and NATO regarding security guarantees has failed, which was perfectly predictable, given the mentality of the Atlanticist establishment. From now on, nothing is excluded on the Russian side. The rest will concern negotiations with the sovereign allies of the Latin American region, knowing that many of the states concerned will see this as a positive step to confront the numerous U.S. interferences in their internal affairs.

Returning to the economy, further economic interaction should be explored within the Eurasian-Latin American framework, at a time when a country like Cuba is already a member-observer of the Eurasian Economic Union (EAEU).

Meanwhile, Iran–Washington’s other strategic adversary in the international arena, along with Moscow and Beijing–is also increasing its interaction with several Latin American nations, including Venezuela, even breaking the blockade imposed on the Bolivarian Republic by the U.S. establishment.

In conclusion, it should certainly be recalled that beyond the alliances forged between many Latin American countries with the axis of multipolarity, the populations of the countries concerned remain strongly mobilized in the face of the continuing attempts at destabilization emanating from the U.S. capital.

In this respect, the example of Bolivia, which had undergone a pro-U.S. color revolution, but which has returned to legitimacy through popular mobilization during the last presidential elections in this country only confirms this thesis. As well as the strengthening of the Latin American progressive axis with the recent re-election of Daniel Ortega in Nicaragua or the victory in the presidential elections of Pedro Castillo in Peru. All of these events confirm that multipolarity and sovereignty are also gaining the upper hand in the Latin American sphere. To the detriment of Washington and those nostalgic for unipolarity.