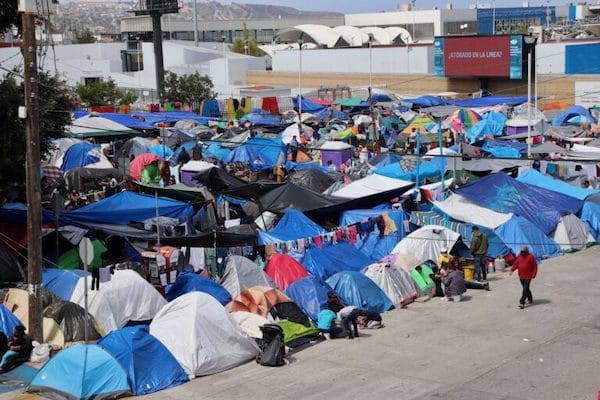 In the year since he was elected U.S. president, Joe Biden has greedily seized Barack Obama’s mantle as “deporter-in-chief.” His administration’s policy towards Haitians and other asylum seekers has been notable for a racist callousness of a stunning scale. The Quixote Center reported that on January 12, 2022–the mournful,  twelfth anniversary of the earthquake that devastated Port-au-Prince and killed 200,000 people–the U.S. celebrated by expelling 443 Haitian asylum seekers, sending them on three flights to Haiti.

From mid-September 2021, to January 12, 2022, the Biden regime deported 14,800 Haitian asylum seekers, a large percentage of whom were minors. As Natasha Lennard pointed out for the Intercept, this is a “deportation operation of scale and speed not seen in decades. And it gives lie to any notion that President Joe Biden’s border regime is kinder than that of former President Donald Trump.” Biden has certainly outperformed Trump’s blatantly white supremacist dog whistles about foreign “hordes” invading the U.S. were loudly maligned by Democrats and their supporters, but his policies are no better.

The Biden regime has ramped up deportations via Trump-era “Title 42” expulsions, as well as the “expedited removal” law, which dates back to 1996 and was expanded under the Trump regime. Title 42 is an obscure health law from 1944 that grants the U.S. government the ability to take emergency action to prevent the “introduction of communicable diseases.” Even though the U.S. has the highest number of COVID-19 cases in the world, the Trump regime revived Title 42 in 2020 as a measure to strip asylum seekers at the U.S. borders of due process. During his four-year term, Trump used Title 42 to remove 500,000 asylum seekers. In under a year, Biden has deported almost 700,000 migrants.

The “expedited removal” process is one where asylum seekers are quickly denied entry based on a brief interview process with Border Patrol officers who have the final say on whether a migrant has a “credible fear” of returning to their countries of origin. With “expedited removal,” migrants are deported without a hearing or appearance before a judge–in effect, without due process.

Then, there is the “Remain in Mexico” policy, formally known as “Migrant Protection Protocols,” which was instituted by the Trump regime. In violation of international law, this policy forced those seeking asylum in the U.S. at the southwestern borders to remain in Mexico while their cases are being processed. This has led to thousands of migrants stranded in Mexico. Many liberals covering for Biden have argued that he attempted to end the program, but were forced by the courts to keep it. But Biden actually resumed the program after a short hiatus, arguing that it has instituted checks in the program to make it more humane. This is how Democratic leadership works in this country: the same draconian policies, but dressed up in the language of care.

It is important to note here that while the scale of the deportation to Haiti is great, and while antiBlackness is a key feature of U.S. migration policy, the majority of deportations under Title 42 expulsions are of migrants from Mexico and Central America. Spanish-language journal Política, reports that in 2021, the Biden regime deported almost 20,000 minors to Mexico. They were from Honduras, El Salvador, and Guatemala.

In addition to deportations, U.S. government policies denying asylum seekers due process has resulted in record number of detentions by the office of Immigration and Customs Enforcement (ICE). An October 2021 report in the Texas Tribune noted that “the number of undocumented immigrants in detention centers has increased by more than 50% since Biden took office.” It also pointed out that, “75% of ICE detainees have no criminal record.”

And while the numbers of detained unaccompanied migrant children have been reduced under Biden, more than 10,000 remain in cages.

We shouldn’t be surprised. U.S. policies hardly change under Democratic leadership. If anything, migrants fare worse under Democratic presidents. We only need to remember the policies of Bill Clinton and Barack Obama. Most importantly, there is an alignment among the U.S. political elites–of both parties–when it comes to creating and enforcing racist, inhumane laws, nationally and globally. We know that both parties push U.S. imperial policies, creating conditions that directly result in desperate attempts of people to escape their homes.

While many Democrats were outraged at Trump’s border wall, the large number of migrant “children in cages,” and lambasted his regime for it’s racist and inhumane treatment of some of the world’s most vulnerable people, they have been generally silent on Biden.

Jemima Pierre is an editor and contributor to Black Agenda Report, the Haiti/Americas Coordinator for the Black Alliance for Peace, and a Black Studies and anthropology professor at UCLA.