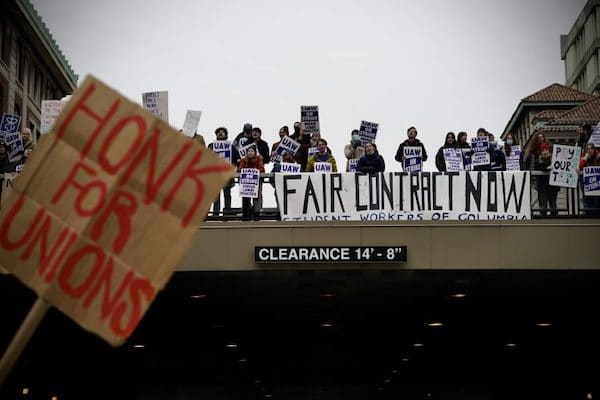 The Student Workers of Columbia shut down classes on Columbia’s two Upper West Side campuses on Dec. 8. (Photo: Sue Brisk for The Indypendent)

Following a grueling 10-week strike and a tentative agreement announced on Friday, Columbia graduate student workers are claiming victory. And with good reason.

The 3,000 striking student workers didn’t get everything they came for in the tentative four-year contract, but they did wrest significant concessions from one of the wealthiest private universities in the country. Those concessions include:

After 10 weeks, the strike is over! We are thrilled to announce that we have reached a tentative agreement with @columbia. This is a historic moment for labor in higher ed, and it is just the beginning. We look forward to getting back to work and compensation for our back work.

After 10 weeks, the strike is over! We are thrilled to announce that we have reached a tentative agreement with @columbia. This is a historic moment for labor in higher ed, and it is just the beginning. We look forward to getting back to work and compensation for our back work. 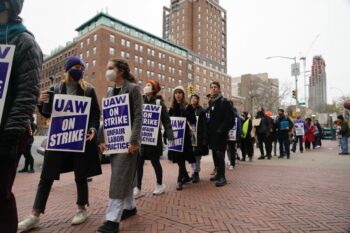 The reasons for the Student Workers of Columbia (SWC) victory are many, but they begin with the striking student workers themselves. They have been organizing for seven years to win a first contract. They went on strike last spring, rejected a contract offer from management they found unsatisfactory and reorganized their union to be more democratic. When they struck again on Nov. 3, they were able to garner enough support from Columbia’s tenured faculty, students and alumni to put additional pressure on the administration and keep from being isolated on campus.

This was demonstrated in spectacular fashion on Dec. 8, when hundreds of SWC members and their labor and community allies linked arms and blocked every entrance to Columbia’s main campus in Morningside Heights. In solidarity with the physical shutdown of the campus, Columbia faculty and alumni announced they were cancelling a variety of  academic and cultural events due to the strike.

The Columbia strike came on the heels of “Striketober,” when an upsurge in strikes by workers at iconic brands such as John Deere and Kellogg’s as well as in local strikes across the country staged by nurses, school bus drivers, coal miners, distillery workers and others combined to make headlines. National polls now show unions have a 68% favorable rating, the highest since 1965. The Columbia student workers benefited from that environment and with their victory have now emboldened others.

With an endowment that has grown from $11 billion to more than $14 billion during the pandemic, Columbia can be thought of as a massive hedge fund with a university attached to it. Its corporate leaders didn’t take kindly to being confronted by graduate student workers who had historically been under their thumb. In the runup to the Dec. 8 shutdown, they announced that any striker who did not return to work by Dec. 10 would be at risk of losing their spring teaching appointments. At a time of surging support for unions, this move was widely denounced and few strikers took the bait. 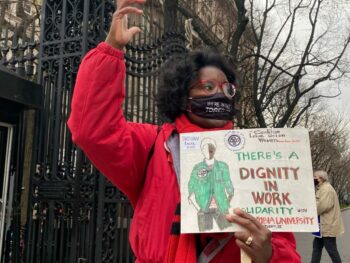 “There’s a dignity in work.” (Photo: Sue Brisk for The Indy.)

Columbia’s regime, increasingly vilified and facing a second semester of disrupted classes for undergraduates whose families are paying over $60,000 per year in tuition and fees, resumed bargaining over the holiday break. It made major concessions on compensation, health care and neutral third party arbitration.

The final point Columbia was forced to concede was the union’s demand for full-unit recognition instead of the version favored by management that would have restricted the new collective bargaining agreement to only half of the union’s members, creating the kind of two-tier system that has become anathema to the labor movement.

SWC members voted by 94% on Friday to suspend their strike. The tentative agreement now goes to SWC’s full membership which will review and then vote on the contract over a 22-day period ending Jan. 27. The agreement is widely expected to pass.

The Columbia strike has been the largest active one in the country for most of the past two months. Here at The Indypendent, we have covered it extensively (see below), just as we have been covering the recent struggles of taxi workers, laundry workers, delivery workers and Amazon workers. When workers have the courage to organize and win strikes they are not only making gains for themselves and strengthening the hand of other working people, they are validating the idea that the best way to change our lives is through collective action, a fairly radical concept in our hyper-individualistic culture. When unions lose, all working people lose and the “common sense” that we’re all on our own is reinforced. 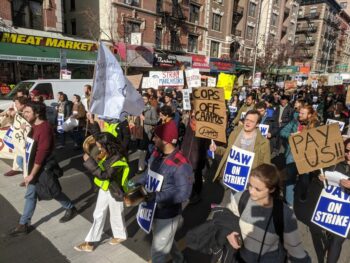 After decades of the labor movement losing far more often than it was winning, it appears the tide has begun to turn even as much bigger battles lie ahead to crack the citadels of 21st century low-wage capitalism: Amazon, Walmart, McDonalds, Uber, Lyft, et al. By winning their strike, Columbia’s student workers delivered an invaluable lesson in solidarity and perseverance—one day longer, one day stronger—that you don’t have to have to go to graduate school to understand.

More Indy Coverage of the Strike

Chanting "union power," hundreds of striking @SW_Columbia members marched through Washington Heights and West Harlem in the past hour. They have been on strike since Nov. 3. @al_bradbury @JonahFurman @DSA_Labor @nycDSA @MariaOrdonezNYC pic.twitter.com/nO6Yw3l8bO

Striking Columbia student workers and their supporters hold a picket line at the campus's main entrance this morning! @SW_Columbia is calling on it’s supporters to help shut down the main campus at 116 and Broadway from 8 am–6 pm today.
Video by Sue Brisk @beafree pic.twitter.com/5jRQ1af2IM

And @Shut_downAmazon even led a chant at the @SW_Columbia strike that escalated today as picketers successfully blocked entries to @Columbia campus! https://t.co/aqM3q0s9YU pic.twitter.com/nw9HgdRjPx