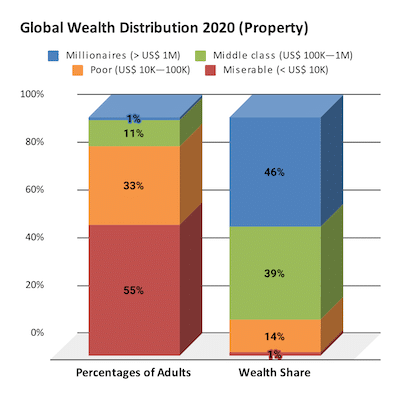 WORLD Inequality Report 2022 underlines the sharp divide between the rich and the poor that occurred as a result of neoliberal policies pursued by global capital using the hegemonic and asymmetric architecture of global institutions. The report clearly shows how the class divide has become relatively more important than the regional divide in determining global inequality. This simply tells that in today’s world where one is born and brought up has relatively less impact than in which class the person belongs to in explaining relative earnings and wealth status. It however says further that even if inequality between countries shows a decline but still the difference continues to be high.

The difference in income of the rich 10 per cent and the bottom 50 per cent at the global level is similar to the level of inequality that existed in 1900-1910. The wealth inequality which measures the difference in ownership of land, buildings, assets, financial papers, cash and so on, that is stock of wealth is much sharper than the inequality in incomes. This rise in wealth and income inequality that peaked during the period 1980 to 2020 according to the report also coincides with the sharp rise in private wealth during this period and a decline in publicly owned wealth in various countries. This can also be linked with the financialisation of the economy and free movement of capital considered to be the hallmark of the current phase of globalisation.

Digital technology and information technology allows fast movement of goods and investment and also in escaping the regulations of particular nation States. Wealth offshoring in tax heavens has increased significantly during this period while the poor of the world are facing challenges of hunger, illiteracy, access to safe drinking water, education and a safe home to live in. The report also reveals the fact that women’s share of labour incomes is still close to only one-third of the total income. This is a combined effect of both female participation in work as well as the male-female wage gap for those who are part of the workforce. In the country studies, the report underlines that India emerges to be a very unequal country both generally in terms of income and wealth inequality and also in terms of the gender gap in income share.

The rising inequality in wealth accumulation is largely attributed to the growing share of private ownership of wealth and the decline in public properties. The private wealth to income ratio was 360 per cent in 1995 and increased to 510 per cent before the Covid crisis. Notable is the fact that since 1995 global household wealth per adult has grown on an average of 3.2 per cent. While the growth of wealth of the global top 0.01 per cent was five per cent per year over 25 years and for the top 52 billionaire’s wealth increased by 9.3 per cent per year over the period.

The report underlines the fact that income inequality on the basis of regions shows a declining trend. The gap between the average incomes of the richest 10 per cent of countries and the average incomes of the poorest 50 per cent of countries dropped from around 50 times to a little less than 40 times. But one can easily see regional income inequality is still very substantial and somewhat similar to what it was in 1900. During the colonial period, both within and between-country inequality increased sharply. During the post-War period, within-country inequality declined due to welfare measures and progressive taxation but between-country inequality continued to rise. Between countries, inequality started declining during the globalisation era but within-country inequality started increasing. But region-wise differences are still remarkable. In East Asia, Russia, Central Asia, and North America, the top 10 per cent earn 16 times more than the poorest half of the population. In Europe, the income gap is 9.5 in 2020-2021.

The report essentially substantiates the fact that neoliberalism worldwide is facing a crisis of legitimacy. The democratic structure and institutions which strengthened the collective will of people and could influence and control to an extent the interest of the ruling class in favour of the welfare of the people at large has turned into anathema for neoliberal regimes.

It is giving rise to highly unequal societies, increasing disparities and unsustainable ecological imbalances. The report makes it clear that class dimensions explain the rising inequality and regional differences although declining but continue to be significant in determining economic outcomes. The period of declining within-country inequality in the world coincides with the exceptional phase of welfare regimes in capitalist countries that kept inequality under control by progressive taxation and redistributive economic policies. The share of wages in value-added remained more or less stable, a balance between production and consumption was institutionalised and finance was under control during this period.

Neoliberalism and the ascendancy of the market rationalised deregulation of capital flows enabling global capital in getting access to the cheap labour force in the global South, leading to the reduced bargaining power of workers worldwide. The nation States were internalising the interests of global finance in the name of market-led reforms. A steep decline in the share of workers in value-added in advanced countries and a far greater fall in the developing world particularly because of weakening and dismantling of existing protective rights of workers led to rising inequality over time.

Financialisation on the other hand facilitated the conversion of public properties into private assets that are packaged and traded through financial instruments. The rising share of private wealth is primarily driven by asset income-driven growth policies persuaded by most of the countries during the neoliberal regime. The squeezing of the poor and offering increasing tax benefits to the corporates gave rise to a level of inequality that is highly unsustainable and unacceptable.