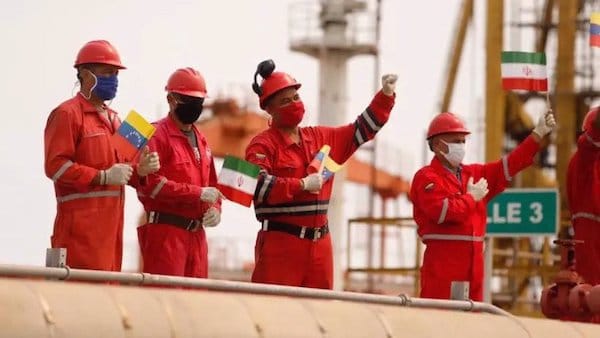 Workers of the state-oil company Pdvsa holding Iranian and Venezuelan flags greet during the arrival of the Iranian tanker ship “Fortune” at El Palito refinery in Puerto Cabello, Venezuela May 25, 2020. (Photo by Reuters)

The Venezuelan oil production reached an estimated average of 900,000 barrels per day (bpd) in December and could reach 850,000 bpd in January, oil industry sources told the Miami Herald.

The sources, cited by U.S. daily Miami Herald, stressed that the rise in Venezuela’s oil output mainly stemmed from the regular shipments of thinners from Iran that had allowed the country to make up for the decline in domestic production.

Thinners, usually the petroleum derivative known as naphtha, are essential to reducing the viscosity of the super-heavy Venezuelan crude oil.

Venezuelan oil experts confirmed the significant growth in the country’s oil production, underlining that the Iranian naphtha is essential for the government in Caracas to be able to sell crude from the Orinoco Oil Belt, which needs to be diluted to be sold on world markets.

“Indeed, they have increased production and there are several elements that indicate this,” said Juan Fernandez, former Executive Director of Planning for Venezuela’s state-run firm Petroleos de Venezuela (PDVSA).

A lot of it is because they have been receiving the Iranian thinner and that goes directly to production in the Orinoco heavy-oil belt.

Fernandez stressed that the increase, together with the sharp rise in oil prices, is providing significant additional income to the government of President Nicolas Maduro and it is helping fuel forecasts that Venezuela will notch in 2022 its first GDP increase in six years.

Experts said that of the nearly 900,000 bpd currently being produced, some 600,000 could be destined for export despite the U.S. ban.

An unnamed industry source told the Miami Herald that the Venezuelan crude is normally sold for $25 less per barrel than the benchmark Brent crude due to the U.S. sanctions, but given that the Brent crude is now at around $90 a barrel, the sale of 600,000 bpd could be generating a monthly revenue of about $1.1 billion a month.

The source added that the flow of oil income could go even further in the near future considering that analysts believe the price of the Brent crude could exceed $100 a barrel in coming weeks.

During his annual address to the nation on Monday, Maduro said the South American country’s economy grew by more than 4% last year, following eight years of recession and rising prices.

“After five years of (U.S.-led) economic war of boycotts and blockades, Venezuela is back on track for economic growth,” Maduro said in his address before the National Assembly, also forecasting the country’s economic growth in the third quarter of last year to be at 7.6%, without further explaining.

Crude production had been gradually declining over the years from the 3.2 million barrels per day that Venezuela was generating when the late President Hugo Chavez came to power in 1999.

By the time Maduro took office in 2013, production stood at 2.5 million bpd, and lack of investment in the industry as a result of U.S. sanctions had reduced the level to an average of 1.34 million bpd by 2018.

Venezuela’s oil production fell below one million bpd after the administration of U.S. President Donald Trump sanctioned PDVSA in January 2019.

The U.S. Treasury Department banned business with PDVSA, in essence prohibiting the purchase of Venezuelan crude in the United States and threatening to punish any U.S. or foreign company dealing with or even discussing business with state-owned companies.

In September last year, a U.S. Treasury spokesperson said the U.S. government was “concerned” about reports that Iran and Venezuela had reached major deals to increase their cooperation in the oil sector.

Iran’s supply of condensate can help Venezuela increase its crude exports as the country needs the revenues to improve an economy that has suffered because of U.S. sanctions. The Islamic Republic has shipped food, refinery parts, condensate and fuel, receiving crude oil and other commodities from Venezuela in return.

Iran’s own oil sales have been targeted by U.S. sanctions since 2018 when a former administration in Washington unilaterally pulled out of an international agreement on Iran’s nuclear program and imposed sanctions on the country.

Both Iran and Venezuela have managed to withstand the economic pressures of the unprecedented sanctions while gradually finding ways to get round them.