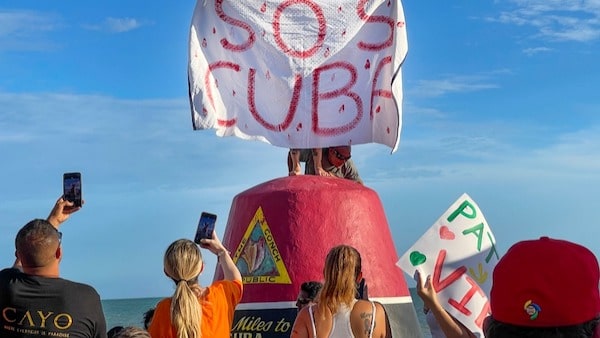 Viral propaganda: In the social media age, the U.S.’ anti-Cuba efforts have to keep up with the way people get their information (and disinformation). Here, protesters in Key West, Fla., use their phones to photograph and video a flag reading ‘SOS Cuba’ from atop the Southernmost Point buoy, July 13, 2021. | Rob O’Neal/The Key West Citizen via AP

The cruder U.S. methods for destroying Cuba’s revolutionary government—military attacks, bombings of hotels and a fully-loaded airplane, violent attacks on officials, biological warfare—did not work. Nor has economic blockade, which of course continues. A more subtle approach also exists. Like the blockade, its purpose is to cause despair and then dissent.

U.S. officials pay for the collection of bad news about Cuba’s revolutionary government and for its dissemination within Cuba and to news outlets abroad. U.S. paymasters provide money to agents for delivery to opponents of Cuba’s government, real or imagined, in Cuba and elsewhere. The recipients find or devise information unfavorable to Cuba’s image and spread it. Cubans’ well-founded complaints about shortages, bureaucracy, low wages, and living with the pandemic become news items.

The groups transferring the money from the United States to disgruntled elements in Cuba and elsewhere are key to the entire operation. One recalls the “bagman” who in certain U.S. cities deliver pay-offs from point to point within a criminal network. These groups transferring money—as authorized by the Helms Burton law of 1996—are bagmen for imperialism.

An odor of criminality is sensed. To interfere with Cuba’s conduct of its own affairs violates norms of international law relating to national sovereignty. And it turns out that, as of 2011,

Accusations of fraud, reckless distribution of funds, and diversion of monies to stateside anti-Cuban groups have prompted temporary stays in disbursement of funds.

The National Endowment for Democracy (NED) is one of two big U.S. paymasters. Founded in 1983, it’s a non-governmental organization funded exclusively by the U.S. Congress. The projects funded by the NED are similar to those formerly undertaken by the CIA.

The list includes 42 groups; the total amount dispensed was $5,077,788. Below appears a short list. It contains the names of groups receiving $146,360 or more, the amount of money each one did receive, its home base, and the supposed shortcoming in Cuba needing to be fixed.

The top recipients of NED funds were:

The State Department’s U.S. Agency for International Development (USAID) is another paymaster. On Oct. 23, 2021, journalist Tracey Eaton’s “Cuba Money Project” website reported on disbursements USAID announced during the previous month. The total being delivered to 12 organizations was $6,669,000. The list, constructed like the list above, includes: 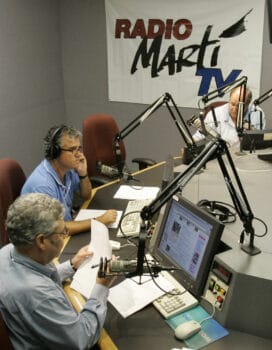 The U.S. has expanded its anti-Cuba information offensive, spreading the dollars around to groups that stretch well beyond the older means like Radio and TV Marti, whose studio is seen here in 2007. | Alan Diaz / AP

Cubans in many cities, predominantly young people, took to the streets on July 11, 2021. They were protesting shortages of medical supplies, food, and other goods; the failure of remittances from abroad to arrive; and, in some instances, racial discrimination. Arrests and detentions followed and, more recently, trials and prison sentences. Social media played a major role in mobilizing the protesters and subsequently in disseminating news of arrests, injuries, property damage, and reaction from abroad.

As with social media trial runs in earlier anti-Cuban propaganda campaigns, some of the U.S. government funds delivered by the intermediaries were undoubtedly earmarked for expanding the role of social media in recruiting protesters and in publicizing adverse fallout.

As bad news from Cuba makes its way to anti-Cuban politicians in the United States and Europe, it takes on added value. New pretexts crop up for administrative actions and legislation that, aimed at destabilization in Cuba, imposes sanctions and tightens blockade rules. These in turn generate reports of new grief in Cuba.

Secretary of State Antony Blinken recently responded to the trials of some of the July 11 protest leaders and the resulting prison terms by announcing visa restrictions against eight Cuban officials. A legislative proposal recently introduced by South Florida congresspersons calls upon President Joe Biden to urge the United Nations to issue sanctions against Cuba. The bill’s title is “Atrocities and Genocide in Cuba.”

The story here is about siege socialism. In his Blackshirts and Reds, Michael Parenti shows Russian revolutionaries under Lenin cutting back on their aspirations due to pressures of civil war and invasion by capitalist nations: “[I]n May 1921, the same Lenin who had encouraged the practice of internal party democracy and struggled…to give the trade unions a greater measure of autonomy, now called for an end to the Workers’ Opposition and other factional groups within the party.”

Fidel Castro once offered a vivid characterization of a socialist society faltering under enemy attacks while being advertised, by those enemies, as the best that socialists can do—as if peaceful circumstances did prevail. He declared that,

For 40 years you try to strangle us. And then you criticize us for the way we breathe.