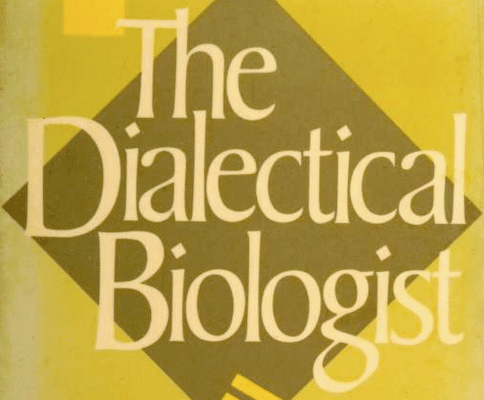 It is not every day that one comes across a brand-new review of a book that was published almost forty years ago and still demands further scrutiny. The Dialectical Biologist by Richard Levins and Richard Lewontin is one such book. 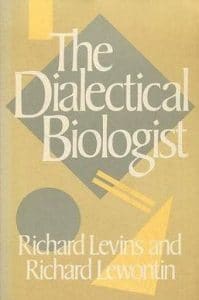 One reason why this review came to be decades after said book’s publication involves the loss of Richard Lewontin, the great American geneticist and evolutionary biologist, who passed away last July at his home in Cambridge at the age of 92. Lewontin was a truly towering figure, one of the greatest thinkers in evolutionary theory and responsible for some of the earliest work in population genetics. He was also a long-standing critic of sociobiology, and did not shy from social and political critique, both in his written works and in public lectures for a wide audience (such as the Santa Fe lecture series from November 2003), discussing topics ranging from genetic determinism, research on IQ, ‘scientific’ racism, to the politics of agricultural research. In his writings and lectures, Lewontin comes across as opinionated and unapologetic, sharp-witted and often sharp-tongued, a man with as much sense of humour (exemplified by the writings of Isidore Nabi) as full of conviction. During his long and fruitful career, most of which was spent at Harvard, Lewontin surrounded himself with scholars from diverse disciplines, and was much admired and beloved by many of his students and colleagues –even if there were, of course, others like Edward O. Wilson who admired him somewhat less. André Ariew, one of the last associates in Lewontin’s lab, describes Lewontin as an excellent philosopher of biology, part of whose lasting legacy is the way he collaborated, mentored and communicated, together with the fertile atmosphere he fostered in his lab. Lewontin was, in his words, very generous with his time, non-hierarchical, inexhaustible, kind and, above all, a mensch.

The news of Lewontin’s passing shook me deeply, surprisingly so considering both his advanced age and the fact that I have never even met him. As a first-year doctoral student, struggling to make sense of my very rudimentary ideas and the sea of literature sprawling in front of me, I came across the brilliant Biology as Ideology. The effect which that little gem of a book had on me and my work I can only attempt to describe as my own personal paradigm shift. Considering the book was hardly fresh from the shelves–and was, in fact, first published a year before I was born–makes this experience even more noteworthy. It can only be seen as a testament to the book’s sharpness, originality and enduring relevance that the ideas I encountered on those yellowed pages had such a mesmerising effect.

Published seven years before Biology as Ideology, The Dialectical Biologist, co-written with the late ecologist Richard Levins, discusses many of the same topics. The latter is comparably more technical, not to mention more than twice as thick. Rather than presenting us with a strictly coherent whole, the book is a representative collection of essays on various topics, all of which illustrate doing biology in a self-consciously dialectical way, which the authors claim has been ignored and suppressed for political reasons.

Levins and Lewontin diagnose the dominant view of nature as a reflection of the nature of social relations in the last six centuries, or ‘the social ideology of bourgeois society,’ according to which individuals are ontologically prior to the social, have their own intrinsic properties, and create social interactions as they collide (1). Thus, to understand society it is necessary to analyse the properties of individuals, since, after all, the society is taken to be just the outcome of the individual activities of the individuals that are taken to make it up. The claim is that this ‘bourgeois view of nature’ was explicitly formulated in Descartes’ Discours, making the science we practice therefore ‘truly Cartesian’ (1). While this Cartesian method of reduction has been successful in various sciences, including physics, chemistry, and several areas of biology, this should not be taken to imply that it truthfully describes the whole of reality. Indeed, the commitment to this method also leads one to overlook the problems and phenomena which do not yield to it easily, such as the structure and the function of the central nervous system and various aspects of development (2-3).

Levins and Lewontin describe four ontological commitments of ‘Cartesian reductionism,’ which all affect knowledge creation (269-70). These amount to the claim that there is a natural set of homogenous parts of which any system is made up, that are all ontologically prior to the whole–that is to say, they all exist independently and come together to make the whole–with their intrinsic properties, which they hold in isolation. Additionally, causes and effects are separate, with causes being the properties of subjects and effects the properties of objects. The world described by these Cartesian principles Levins and Lewontin term the alienated world, ‘in which parts are separated from wholes and reified as things in themselves, causes separated from effects, subjects separated from objects,’ and which ‘mirrors the structure of the alienated social world in which it was conceived,’ according to which individuals are social atoms colliding in the market (269-70).

Levins and Lewontin criticise contemporary science as blind to the fact that social forces influence, and often even dictate, the scientific method, theories and facts (4). Levins and Lewontin ascribe this to the Cartesian social analysis of science which, much like the Cartesian analysis of science, alienates science from society, making scientific method and fact objective and free from social influence (4). In contrast, Levins and Lewontin see science as a social process both caused by and causing social organisation: in their eyes, science is fundamentally political for it is the dominant ideologies that ‘set the tone for the theoretical investigation of phenomena, which then becomes a reinforcing practice for the ideology itself’ (268). In fact, to deny this interpenetration would itself be political, since it would give ‘support to social structures that hide behind scientific objectivity to perpetuate dependency, exploitation, racism, elitism, colonialism’ (4). This line of thought is vividly illustrated by the example of deciding on the cause of tuberculosis (270):

The tubercle bacillus became the cause of tuberculosis, as opposed to, say, unregulated industrial capitalism, because the bacillus was made the point of medical attack on the disease. The alternative would be not a ‘medical’ but a ‘political’ approach to tuberculosis and so not the business of medicine in an alienated social structure. Having identified the bacillus as the cause, a chemotherapy had to be developed to treat it, rather than, say, a social revolution.

Levins and Lewontin are aware of the fact that they too, like other scientists, are not free of preconceptions. However, the authors aim to make their pressupositions explicit, which is why their essays are written from an openly Marxist perspective. In contrast with the Cartesian worldview, Levins and Lewontin present a dialectical world, in which things are ‘assumed from the beginning to be internally heterogeneous at every level’ (72). One way the authors suggest to liberate ourselves from the hold of Cartesian science is to take a better look at our concepts of part and whole (3). Importantly, parts and wholes cannot exist without each other. Parts are defined by the whole and they generally acquire their properties as a consequence of being parts of that particular whole (273), that they would not have on their own or as part of a different whole. In other words, ‘[i]t is not that the whole is more than the sum of its parts, but that the parts acquire new properties’ (3). The other side of the coin is that, as parts acquire new properties, they also impart new properties to the whole, which then affect changes in the parts themselves, and so the process continues. In other words, parts and wholes both evolve as a consequence of their relationship, as does the relationship itself (3). This makes them dialectical: they cannot exist with one another, they acquire their properties from their relation, which evolves due to their interpenetration. In this view, change is central: ‘Because elements recreate each other by interacting and are recreated by the wholes of which they are parts, change is a characteristic of all systems and all aspects of all systems’ (275).

The book is divided in three parts. The first part comprises three essays on evolution, as both a theory and ideology, as well as the question of adaptation and the organism as its subject and object. The three essays in the second part all concern analysis, while the final part illustrates that science is a social product which in turn results in social product. Essays here discuss topics such as the political economy of research in agriculture, pesticides, community health and human nature.

While several of the essays in the collection retain a primarily historical relevance, such as the essays on Lysenkoism and doing applied biology in the ‘Third World,’ most remain socially relevant today. These include the analysis of the penetration of capital into agricultural production (ch.9) and of the myopic and reductive approaches to public health (ch.12), but maybe especially the account of the commoditization of science (ch.8) which rings just as, if not more, true today. Levins and Lewontin describe how research has become a business investment (200) with scientists ‘scientific manpower’ (202) that is ‘increasingly proletarianized’ (202) in the name of cost management. The relation between grants and research has been reversed: ‘whereas initially the grant was a means for research, for the entrepreneurs of science, the research has become the means to a grant’ (204). Scientific publishing has come to depend ‘on the publisher’s and editor’s need to fill the journal and the author’s need to be published in time for tenure review, a job hunt, or a raise,’ while the necessity of publication is rarely questioned (205). Furthermore, Levins and Lewontin characterise a coherent implicit bourgeois ideology among scientists, which is individualist, asserting that ‘progress is made by a few individuals (who just happen to be “us”)’ (205), as well as elitist in a profoundly antidemocratic way, ‘encouraging a cult of expertise, an aesthetic appreciation of manipulation, and a disdain for those who do not make it by the rules of academia’ (206).

On the whole, the reason for The Dialectical Biologist’ s ongoing relevance is not primarily the particular sample of the themes that the essays explore, but rather its radical approach, which remains as disregarded today as in the time of its publication, making the book all the more exceptional and significant. It is this distinctive approach that merits reassessment in the light of the problems we face today in our alienated world.

I would like to thank André Ariew for sharing with me his memories of Dick Lewontin.

Martina Valković is a Research Assistant and a doctoral candidate at Leibniz University Hannover, and a Visiting Researcher at Radboud University Nijmegen. She works on cultural evolution and norms.