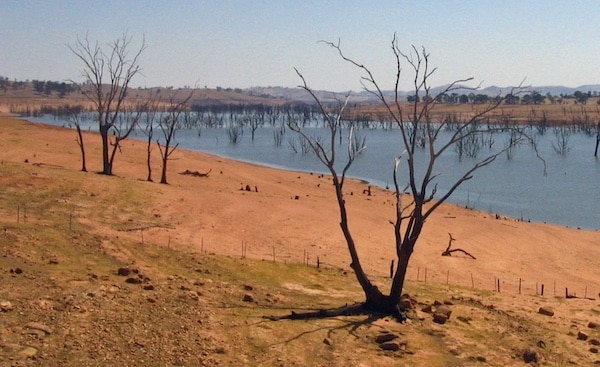 The book is an environmental history of the once thriving basin, which evolved over millions of years to accommodate and retain water during the cycle of floods and droughts. It’s the story of how this immense river system and the ecosystems that depend on it are being slowly killed for profit.

Beresford details how, following the invasion and colonisation of this continent by the British, anything that got in the way of profit-driven agricultural expansion—from Indigenous people to native ecosystems to wildlife—faced campaigns of “annihilation”. The Australian state has been the key cultural and economic driver of this (ongoing) destruction, and its goal from the start has been to foster an agriculture sector that can compete in the global capitalist market.

Within decades of the British invasion, tens of millions of sheep roamed the landscape, devouring the native grasses. These grasses have deep roots adapted to soak up occasional heavy rainfall into the spongy soil. In their place, squatters planted shallow-rooted grass, which was more subject to damage by summer heat and storms. Furthermore, the spongy soil was pounded down by the heavy-hoofed sheep and cattle, leading to soil erosion and reduced soil fertility.

Cleared land has always been seen as more profitable in the short term. Fewer trees mean more crops and cattle. This logic was promoted by state and federal governments. Until the 1980s, Beresford explains, farmers could obtain a tax deduction for spending on the destruction and removal of timber, scrub or undergrowth. The result was wholesale annihilation of forests along the basin’s network of rivers. By 1995, the CSIRO estimated, between 12 and 15 billion trees had been removed in the region, and the logging has continued to this day.

Vast areas of irrigated crops along the Murray River were once shady oases of river red gums (Eucalyptus camaldulensis). The trees, Beresford writes, were “found for hundreds of kilometres along the Murray, stretching from 5-13 kilometres back from the river”. They are “perfectly attuned to the periodic flood conditions”, and played a role in managing water flow and retention along the river. Today their numbers are much reduced.

Land clearing, combined with declines in water flow, has also contributed to a salinity crisis along the Murray—harming native ecosystems and agriculture alike, as well as impacting Adelaide’s drinking water. The river red gums and other trees act as pumps, keeping ancient salts dissolved in groundwater. As “farmers—backed by government schemes—removed the trees”, writes Beresford, it resulted “in a rising water table bringing salt deposits to the surface, which killed plant life”. By the 1970s, a tonne of salt was carried annually down the Murray River from the irrigation drainage system.

Beresford also writes about the state-funded war targeting many native animal species—seen as
“pests” that get in the way of productive harvests. The basin was once teeming with dingoes, wallabies, kangaroos, wombats, platypuses, koalas and emus. Each species was slaughtered in the millions. Some—like the kangaroo and wallabies—were able to adapt and survive. Most, however, have disappeared from agricultural land and continue to have their last remaining habitats threatened.

The campaign of destruction began in earnest in the late 1880s, by which time all state governments covering the basin had adopted some form of “pest” control act. “The acts”, Beresford explains, “gave the government the power to enter and inspect any property and, if vermin were found, order the owners to destroy the pests under threat of a fine. Inspectors could order the laying of poisons and the erection of new fences”. The drive to annihilate native species went beyond those deemed agricultural “pests”. Species like the platypus and koala were also slaughtered to supply the global fur and feather trade.

Beresford recounts two largely forgotten droughts as a warning of what may lie ahead without radical change. Both the Federation Drought of 1895-1903and the Australian “dust bowl” of the 1930s and 40s turned much of the rural landscape of the eastern states—centred in the Murray-Darling Basin—to dust.

The Mallee region, an agricultural area surrounding the north-western Victorian town of Mildura, was particularly badly impacted. During the Federation Drought, Beresford writes, “drifts of sand in this and other areas filled houses knee-deep, blocked front doors, clogged water tanks and engulfed fences and vegetation”. Many settlers left the region, and those who remained were “on the verge of starvation”. This story was repeated across the Murray-Darling Basin from Victoria, through NSW, to southern Queensland.

The drought, Beresford recounts, had a death toll in the thousands “from the effects of heat, bushfires, disease and malnutrition”. And its impacts weren’t limited to rural areas. “The dairying, meat export and wheat industries were paralysed”, creating food shortages in the major cities.

The “dust bowl” of the 1930s and ’40s caused similar levels of hardship. “In terms of the area affected by erosion and the length of time over which dust storms erupted”, Beresford argues, “Australia’s dust bowl was greater than America’s”. Agricultural industries were crippled once again, topsoil from vast areas of farmland was blown out to sea, and permanent gangs of workers were required to keep railways free of sand drifts.

The Murray-Darling Basin was in a state of collapse during these two prolonged periods of drought. This collapse was just as much a product of human activities as it was of the natural variability of weather patterns and rainfall. According to research on the Federation Drought published by the CSIRO in 2019, the cause was an El Niño event exacerbated by “land clearing, degradation of native grasses, overstocking and overcropping, and the introduction of feral species”.

These conclusions were little different from those drawn by scientists at the time. As early as 1885, the NSW Royal Commission on the Conservation of Water concluded that the wholesale clearing of forests had reduced rainfall “by up to 50 per cent in some districts”. But despite the impact of the droughts and the warnings of scientists over many decades of the need for change, the kind of environmental vandalism that contributed to the devastation has never ceased. 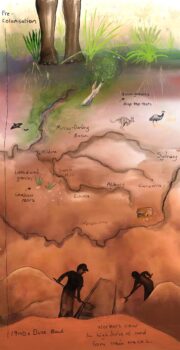 Given what we know about the likely impacts of climate change on Australia, it’s certain that we’ll face more, and more severe, droughts in the years ahead. Scientists predict that the kind of extreme El Niño events that triggered previous severe droughts will increase in frequency in a warmer world. And already, a long-term decline in water flows into the basin is evident. A 2018 CSIRO study found that “the average inflow to the Murray River during the past 20 years was almost half the 20th century average”.

Governments have heralded irrigation as the solution to drought. But it’s a “solution” only for those big irrigators farming cattle or growing water-intensive crops like cotton, who can invest in the machinery and water storage infrastructure required to hoard all the water they need. For local ecosystems and communities in the basin, it’s making things worse.

The ABC’s Four Corners episodes “Pumped” (2017) and “Cash Splash” (2019) exposed the large-scale, unregulated over-irrigation occurring across the Basin, covertly backed by our corrupt political establishment and the Murray-Darling Basin Authority. The consequences of this ecological vandalism have been devastating. The basin ecosystem is dependent on periodic floods, which fill a network of wetlands and lakes that keep the river system and surrounding landscape hydrated during periods of drought. Today, however, due to the vast amounts of water being pumped out by big irrigators, even the wettest seasons aren’t enough to replenish fully the Basin’s natural reserves.

In early 2021, residents of the western NSW town of Menindee were in uproar. Their water supply turned green and stank. Beresford records, “The townspeople claim that water from the drought-breaking rains of early 2020 wasn’t flowing to them”. This created the conditions for an algal bloom. The last time the Darling River was in the same poor shape was in 2018, when another algal bloom killed an estimated one million fish. Widespread heavy rain across NSW and Queensland in the second half of 2021 has improved the situation, but without fundamental change, the shortage of natural flows through the system will become the “new normal”.

Beresford’s book captures one relatively local aspect of a global crisis. His message is clear: if we fail to change course, Australia’s food bowl will again turn to dust. And this time, due to the combined pressure of climate change and continuing ecological destruction, the damage may be fatal. And when we expand our view from the Murray-Darling Basin to encompass the entire Earth, we get a terrifyingly clear picture of the suicidal trajectory that capitalism’s drive to short-term profit has put us on.

We need not, however, resign ourselves to a future battle for survival against ever-encroaching desert sands. Scientific knowledge gives society the capacity to be stewards of a sustainable food system across the Basin and our entire planet. We have the capacity to transform agriculture into a system that is capable of feeding Earth’s current population and more: one that is a carbon sink rather than a major emitter; one that safeguards key ecological functions such as water flow and soil health; and one that integrates corridors for wildlife, wetlands and native forest systems for moisture feedback, nutrient sinks and biodiversity.

The profit-driven system of capitalism has failed. To save the Murray-Darling Basin and our habitable planet at large, we need nothing short of far-reaching system change.