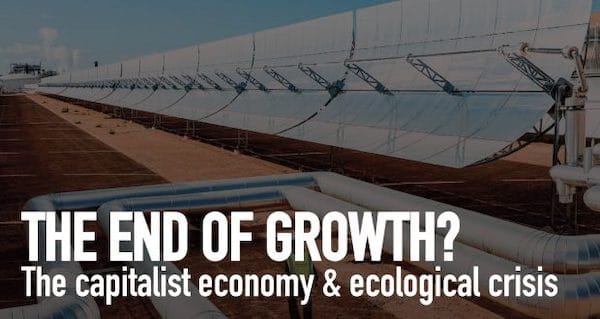 Many ecologists, activists and academics argue that an obsession with economic growth is the cause of our current ecological crisis and a commitment to “degrowing” the economy is the solution.

Too often, however, this discussion lacks a sufficient class or anti-capitalist content and workers are blamed for our supposedly destructive “consumption patterns”. Instead, socialists should be clear that the cause of the climate crisis is the capitalist system and its incessant drive to accumulate profits, and that the only way to solve the crisis is to struggle for a socialist world where human need, including a sustainable relation to nature, comes before private greed.

Under capitalism, the driving force of the economy is the pursuit of profit. The competition between companies and even different capitalist powers for markets and resources means that this drive for profit is relentless and expansive. Therefore, capitalism also involves a continuous quest for economic growth.

At the same time, these companies will seek to “externalize” the cost of their activities, to leave them to be paid by someone else. The capitalist firm doesn’t care on what basis it grows; whether its products are useful or cause harm, or if its activities are environmentally sustainable.

Capitalism is a system of contradictions. The capitalists get their profits by exploiting workers, as well as the resources extracted from nature in the labor process. The constant need to accumulate more profits means capitalism extracts more and more resources in increasingly destructive ways, ultimately leading to the depletion of soils, minerals, forests, the life in our oceans etc–which undermines the system’s own sources of wealth.

Capitalism is increasingly coming up against the ecological barrier to its unrestrained development, as seen in mounting natural disasters, the recent shutdown of the power system in Texas, and a global pandemic, all at least partly attributable to humanity’s increasing incursions into nature.

As well as this, capitalism is a system that primarily organizes investment through the chaos of the stock market, where investment is motivated only by the pursuit of profit. Today, capitalists increasingly choose to speculate with their wealth through complex financial products that have little relation to actual value in society–what Marx termed “fictitious capital”. This is because they can make more short-term profits here than they can through actual productive investment.

At the same time, the desire of the capitalists to drive down the share of wealth that goes to the working class means that workers collectively are not able to buy all the goods the capitalists put to market. This is one way that capitalist growth eventually comes up against its limits and throws the system into crisis and recession. We are now experiencing this process of crisis in Ireland and internationally for the second time in just over a decade.

When growth has been rooted in productive investment, it has often led also to increases in working class living standards, although workers’ gains are usually dwarfed by those of corporations and the rich. Periods of economic growth, for example in the decades following World War 2, were also sometimes used by capitalist governments to grant social reforms in the interests of working people, such as pensions, public health and education services, welfare protections etc. This was done not out of any innate kindness but as a mechanism to stave off potential revolutionary challenges to the system from the working class.

However, in the preceding decades of neo-liberal capitalism, the basis for growth has been precisely the reduction of the share of wealth going to the working class. Capitalism has suppressed wages, gutted public services, eroded economic security. Inequality has exploded as the gains of economic growth congealed at the top. At the same time, the capitalists have promoted more and more consumption fueled in significant measure by debt. This means that today capitalist economic growth often means little real gain for working class people.

The recovery from the great recession of ’08 was largely a joyless one. This was illustrated graphically here in Ireland in the 2020 election when the establishment did not benefit from any “feel good” factor whatsoever–in fact suffering a historic defeat. This was despite nominally impressive growth rates in the preceding years. The recovery did not alter the reality of low pay, precarity and housing distress. In Britain, the Office of National Statistics found that, despite a decade of “growth”, real wages only recovered to the level of 2008 at the end of 2019–just in time for the next crisis! At the same time, the numbers on zero hours contracts were the highest on record, at just under a million workers.[1]

Meanwhile, the mounting burden of ecological breakdown will not be shared equally; as those with wealth move to insulate themselves from the consequences of the economic system they have profited from. As unprecedentedly low temperatures drove catastrophic power outages in Texas, working-class, poor and minority neighborhoods bore the brunt of the power cuts while empty skyscrapers lit up the city skyline.

Karl Marx said that under capitalism: “Accumulation of wealth at one pole is, therefore, at the same time accumulation of misery, agony of toil slavery, ignorance, brutality, mental degradation, at the opposite pole.”[2] This sums up the capitalist economy today. At the same time, of course, workers are still liable to pay the price when the system goes into recession. The reality is that at no stage in its cycle of boom and bust, does the capitalist economy operate in the interests of the working class.

An economy for need, not greed

This means that without a planned transition to a sustainable means of life the tendency will be for ever increasing emissions. So the debate about growth and degrowth is useless unless linked to the need to bring an end to the chaos of the capitalist market.

The purpose of the capitalist economy is to deliver increased profit for the bosses. The purpose of the economy under socialism would be to fulfill human need in a sustainable way. This means taking the key sectors of the economy out of the hands of big business and bringing them into public ownership, under democratic control. This means we can reorganize the energy industry, transport, agribusiness and production overall on a planned basis, in the interests of both people and the planet.

Socialists want a better life for the vast majority on this earth. We know many, even in the richer countries, are in poverty or barely keeping their heads above water, do not have access to decent housing or healthcare, or have no economic security for the future. We believe this to be completely unjustifiable in a world of incredible abundance. For this reason, we reject attacks on working-class living standards, even those that are introduced with an environmental veneer, e.g. water charges, or carbon taxes.

The vast majority of the world’s population is responsible for very little in terms of carbon emissions. A recent UN report shows that globally the top 1% of earners are responsible for a yearly per capita average of 74 tons of C02 per year. Meanwhile for the bottom 50% of earners the figure is 0.7 tons.[4] In much of the world a socialist system would need to increase production on a sustainable basis and redistribute wealth. Even in the wealthier capitalist countries many sectors that are not prioritized for capitalist investment would need to be expanded under a socialist system, not reduced–healthcare, housing, renewable energy for a start.

A world of waste

At the same time, capitalist production involves enormous waste. We should not underestimate the extent of this:

As we can see, the mountains of waste produced under capitalism are not a product mainly of the demands of consumers, but instead serve the needs of capitalist profiteering. The structure of capitalist society itself also partly conditions our consumer needs. Those who don’t live near reliable public transport “need” to buy cars, people on low incomes will “choose” to buy fast fashion etc.

To create more and more products that aren’t needed or will be sent rapidly to landfill, or to generate more and more artificial demand is all “growth” in capitalist terms, but it isn’t human progress. A democratic, planned economy could do “more with less” as part of a planned ecological transition–retooling useless or destructive industries, eliminating duplication, overproduction and planned obsolescence, focusing on fulfilling needs not generating artificial wants and transforming agriculture, transport and energy production on a sustainable basis. In such a system whole industries, communities and cities would be planned democratically and on a completely different basis, putting an end to capitalist overproduction and waste and allowing for a more rational allocation of resources.

Some argue that a simple transition to renewable energy will solve the ecological problems we face. This transition is both necessary and possible, but won’t be done under capitalism that will extract every source of fossil fuels down to the last, so long as there is profit to be made from them.

But even if this were achieved, we would still face a range of looming ecological catastrophes. The fact is that capitalism is already exceeding a number of planetary boundaries for safeguarding a safe environment for human civilization on earth.

These include species extinction, soil degradation and deforestation, to name only a few. Their common source is the increasing scale and intensity of humanity’s incursions into nature, which are now undermining the basis of our own existence on the planet.

Nor will technological changes alone solve the problem of a sustainable relationship with nature. Under capitalism, the opposite is the case: while technological changes result in the more efficient use of energy, this then creates the basis for further expansion and so paradoxically technological development often results in a net increase in the amount of energy used.[10]

While technology may alter to some degree what the limits are, we have to accept the reality that “you can’t have infinite growth on a finite planet”. Capitalism means an increasingly destructive and frantic search for resources that can be extracted and land which can be developed, with the benefits of this activity more and more concentrated in the hands of the few.

Socialist planning can ensure the rational development of the quality of our lives without increasing environmental intensity. Only on this basis can we restructure our society around need, not profit, creating countless socially necessary jobs in pursuit of building a sustainable system.

Socialists stand for massive investment in low carbon jobs and sustainable infrastructure, as well as the introduction of a four-day work-week with no loss of pay. This would not only solve the problem of permanent unemployment under capitalism by distributing work to all those who need it, but would also free workers up to participate in political and economic decision-making, and would achieve a better balance between work, our social lives and leisure.

This will still pose complex questions about how products, industries and practices can be maintained, but these are best resolved on the basis of democratic discussion in a society founded on equality and solidarity.

Conor Payne and Chris Stewart are with Irish section of the Socialist Party. Article courtesy: Socialist Alternative, a U.S. socialist organization organising people in workplaces, communities, and campuses against the exploitation and injustices people face every day.