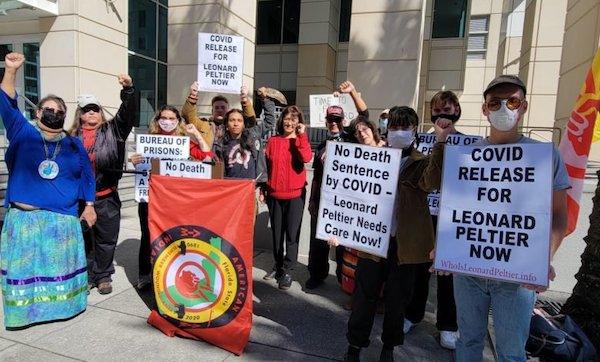 Indigenous activists and supporters held a news conference in Tampa, Florida, on Jan. 31 to announce that Indigenous political prisoner Leonard Peltier had contracted COVID-19 in prison, endangering his life.

They issued a call for concerned individuals and organizations to pressure the prison system to immediately release the 77-year-old Indigenous elder to a hospital where he could get the appropriate care, and to demand that President Joe Biden grant him clemency and release him from prison. Feb. 6 marks the 46th anniversary of Peltier’s arrest.

Peltier is incarcerated at Coleman penitentiary, about an hour’s drive from Tampa. He tested positive for COVID-19 on Jan. 28, and does not feel well, according to his attorney Kevin Sharp. While fully vaccinated, he was never given a booster shot. Peltier suffers from diabetes, an abdominal aortic aneurysm, kidney disease, high blood pressure and has had open heart surgery. These serious co-morbidities put him at high risk for a bad COVID-19 outcome. It is urgent that he get the best of care immediately.

“If Leonard Peltier dies in prison, God help us,” said Carol Gokee, co-director of the International Leonard Peltier Defense Committee. “America is watching, Joe Biden, it’s up to you to release this man.

“It’s up to everybody to reach out to their Congressman, reach out to the President, call the comment line,” Gokee continued. “Send emails. Don’t think it’s futile because every email you send adds weight to those requests.” Activists are also being ask to sign a petition for his immediate release.

Peltier was jailed in 1976, wrongfully convicted of killing two FBI agents when they conducted a violent raid on the Pine Ridge Reservation in South Dakota in 1975. Another speaker at the news conference, Jean Roach of the Cheyenne River Sioux Tribe, was there the day that the FBI stormed the reservation. “We barely all survived,” she said. “Most of us were teenagers, and nothing has ever been done about the wrongdoings of the FBI when they attacked our people. Leonard Peltier only protected us. What’s wrong with that?”

Roach, the co-director of  the ILPDC, placed Peltier’s situation in the context of the ongoing war against Native American people. “We’re tired of it,” said Roach. “What year is this? The colonization and genocide have to stop.” 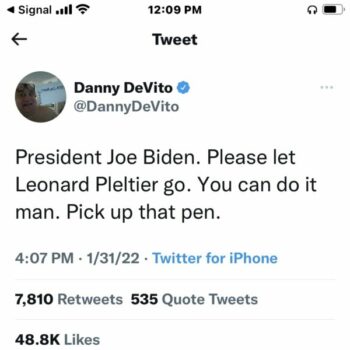 Present at the news conference was a delegation from the Tampa Party for Socialism and Liberation, including the group’s former national presidential candidate Gloria La Riva. They held signs calling on the U.S. government to release Peltier. That evening the ILPDC brought 70 people together to view the documentary “Incident at Oglala,” exploring the incident where Peltier was arrested, written and narrated by Robert Redford.

Over the years Peltier’s case has gotten international support. Even a former FBI prosecutor on his case called for clemency in 2017. In the last few days, actors Danny DeVito and Susan Sarandon have tweeted support for Peltier and demanded his release.

All are urged to sign, and get their friends to sign, a petition raising the following demands to save Peltier’s life: