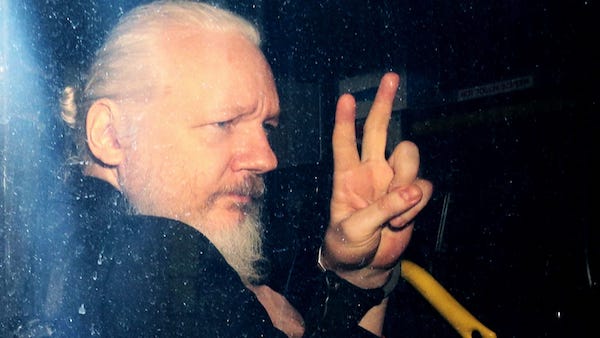 I suggested in my last post that the British Establishment may be looking for a way out of the terrible Assange debacle without raising difficult truths about the United States justice and penal system. The functioning of the Establishment, the way it forms a collective view and how that view is transmitted, is a mystery to many. Some imagine instructions must be transmitted by formal cabals meeting as Freemasons or Bilderbergers or some such grouping. It is not really like that, although different fora of course do provide venues for the powerful to gather and discuss.

I have a bit of a feel for it all, having been a diplomat for twenty years and member of the Senior Civil Service for six. And if I was advising someone who wanted to think of it seriously, I would say human nature doesn’t change; read Thackeray and Trollope, Harold Nicolson and watch the amazing Brian Cox in Succession. All these sources give genuine glimpses of insight.

Former foreign office minister Alan Duncan appears to fancy himself as something of a Harold Nicolson, though sadly lacking the wit or writing ability. Duncan has published his diaries. Duncan is the former FCO minister “for the Americas”, who cooperated with attempts to have Julian Assange removed from the Ecuadorean Embassy, and was the point man for the CIA’s various illegal schemes around Assange. Duncan referred to Assange in parliament as a “miserable little worm”.

And who was Alan Duncan’s best friend at Oxford? Why, none other than Ian Duncan Burnett, now Lord Chief Justice of England and Wales, the judge who heard Assange’s High Court appeals. As Alan Duncan’s diary entry for 14 July 2017 tells us:

On Alan Duncan’s birthday on 7 June 2017 Ian Burnett and his wife were part of the dinner celebration, alongside former Tory leader William Hague, and the arms dealer Wafic Said and wife. Wafic Said was central to the largest bribery scandal in British history, the Al-Yamamah BAE contract for arms to Saudi Arabia, where an eighty billion pound contract involved hundreds of millions in corrupt bribery payments swirling around Wafic Said and his friend Mark Thatcher.

The only reason several very rich people did not go to prison is that Tony Blair–another Oxford University man–and Jack Straw, the recipient himself of BAE largesse, made a historic decision that the Serious Fraud Office investigation must be stopped “in the public interest”. The Serious Fraud Office subsequently “lost” all the thousands of documents proving the corruption. Thus enabling the central fixer, arms dealer Said, to enjoy a jolly dinner and banter with the new Lord Chief Justice of England and Wales, rather than eat his dinner in Ford open prison.

That, my friends, is how the British Establishment functions. It also of course enabled the continuing relationship that means British planes, missiles, bombs, mechanics, trainers and special forces are every single day involved in eviscerating women and children in Yemen. I do hope they are proud.

On 27 May 2018 Lord Chief Justice Burnett and Alan Duncan were at Chequers having lunch with Prime Minister Theresa May, Michael Gove and “journalist” Sarah Vine and–to quote Duncan–“two financier couples”. Thus do politics, the law, the media and big money mix, dear reader. These are not special events. It is the everyday milieu. Nobody needs to phone a judge and tell him what to think; they know what their circle thinks from constant experience and interaction, and they can extrapolate from the general to the particular.

The politicians freeload–Duncan’s birthday bash had been paid for by Tory party donor, Carphone Warehouse’s David Ross, whose unethical business practices I outlined two years ago. Some of us may feel distaste at the idea of having, or attending, birthday parties gifted by a businessman; but we are not politicians. Or judges.

There is no doubt that Jimmy Savile’s ability to mingle freely at precisely these kind of social gatherings, hosted by royalty and prime ministers down, provided him with the cloak of Establishment protection which enabled his decades of crime. To deny it is ridiculous. It is also very interesting how unanimously the Establishment has decided to protect Keir Starmer. They faced a real danger for a few years with one of England’s two main parties under the control of genuinely radical figures. Having managed to get the big money friendly Sir Keir Starmer into place and neutralise any possible threat to their wealth, the ferocity of the Establishment’s defence of Starmer is fascinating.

There is no doubt that Starmer was indeed Director of Public Prosecution and head of the Crown Prosecution Service in 2009 when it was decided that credible allegations against Jimmy Savile should not be prosecuted (after they had reached that stage already decades too late). Of course the Director of Public Prosecutions does not handle the individual cases, which are assigned to lawyers under them. But the Director most certainly is then consulted on the decisions in the high profile and important cases.

That is why they are there. It is unthinkable that Starmer was not consulted on the decision to shelve the Savile case–what do they expect us to believe his role was, as head of the office, ordering the paperclips? 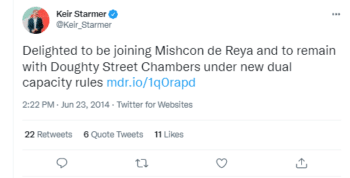 When the public outcry reached a peak in 2012, Starmer played the go-to trick in the Establishment book. He commissioned an “independent” lawyer he knew to write a report exonerating him. Mistakes have been made at lower levels, lessons will be learnt… you know what it says. Mishcon de Reya, money launderers to the oligarchs, provided the lawyer to do the whitewash. Once he retired from the post of DPP, Starmer went to work at, umm,

It is remarkable that the media has never got as excited about any of the lies told by Johnson, as they have done about what is in fact a rare example of Johnson saying an interesting truth. Starmer was indeed, as Director of Public Prosecutions, responsible for the non-prosecution of Savile.

But just as Savile was to be protected over actual sex crime, Starmer knew that Assange was to be persecuted over fake sex crime. Starmer’s conduct of the Assange case was entirely corrupt.

It is important for you to understand that Assange was never charged with any sex crime in Sweden. He was wanted for questioning, after Stockholm’s chief prosecutor had decided there was no case to answer, but a prosecutor from another district had taken up the case. Assange always believed the entire thing was a ruse to get him sent from Sweden to the United States. His legal team had offered the Swedish prosecutors the chance to interview him in the Swedish Embassy back in 2011, which should have enabled the case to be closed.

Under Starmer, the Crown Prosecution Service told the Swedish prosecutors not to come to London. The emails in which they did this were destroyed, and only recovered by an FOI request at the Swedish end. You will recall that, when after a further seven long years Swedish prosecutors finally did interview Assange in the Ecuadorean Embassy, it resulted in the Swedish investigation being dropped.

Had Starmer not prevented it, the Swedish investigation could have been closed in January 2011 following interview.

Then in October 2013, while Starmer was still DPP, his staff emailed Swedish prosecutors in response to reports that they wished to drop the case, saying “Don’t you dare get cold feet”. The Swedes responded explaining they did indeed wish to drop it. The Crown Prosecution Service again dissuaded them.

Why was Starmer intervening to insist a foreign state continue an investigation that state itself wished to stop, and which involved no British nationals?

I am very confident there is no other example of the British DPP interfering in an overseas investigation in this way. It certainly was nothing to do with the ostensible subject matter of the Swedish investigation, which doesn’t rate a mention in the email correspondence. There can be no doubt that Starmer’s motive was entirely ulterior to the Swedish investigation, and almost certainly is related to the illegal CIA activity against Assange and the current U.S. extradition effort. Starmer is revealed as a highly unscrupulous and mendacious character.

That has of course been confirmed by the downright lies Starmer told in seeking election by the Labour Party membership, when he stated he would maintain Corbyn’s popular left wing economic policies, particularly on rail and utility nationalisation. Once in power Starmer simply ditched these pledges in favour of billionaire-enabling policies, and started a purge of the left of the party on an epic scale.

The British Establishment likes Starmer. They can’t allow Boris Johnson–who is fast becoming a liability to them–saying true things about Starmer which they wish to be buried. Watching their propaganda apparatus act in unison to defend Starmer, and reconfirm in the popular mind the binary choice between their blue puppet and their red puppet, has been fascinating viewing.

As I frequently state, I don’t mind if you agree or do not agree, and I certainly want everybody to think for themselves. My aim is to point out facts that are insufficiently considered and project a different perspective to that commonly promoted in the mainstream media. I am not always right about everything. But I hope that you found reading this gave you some ideas to think through.

Correction: The 2011 offer by Assange was an interview in the Swedish, not Ecuadorean, Embassy. This has been corrected.