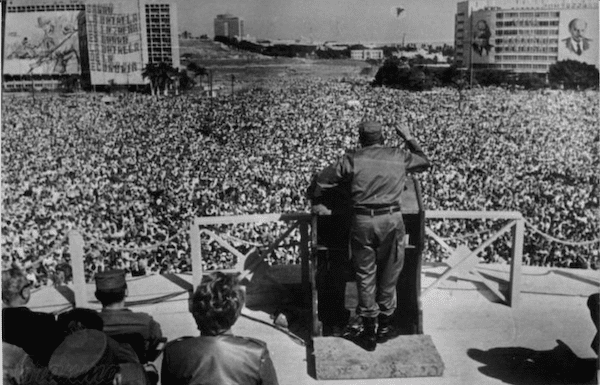 Just one day following Kennedy’s Presidential Proclamation formalizing the economic blockade of Cuba, on February 4, 1962, in José Martí Plaza de la Revolución, more than a million people ratified what became known as the Second Declaration of Havana, an emphatic response to the aggression, sabotage and crimes against our country, financed by the United States.

“We will resist in all arenas… the homeland does not work for today, the homeland works for tomorrow. And no one will be able to steal from us a tomorrow so full of promises, no one will be able to prevent it, because with the fortitude of our people… with the courage and heroism of our people, we are going to conquer it,” Fidel insisted at the time.

He condemned U.S. maneuvers to isolate Cuba on the very day that, in Punta del Este, Uruguay, the Organization of American States expelled our nation from the organization, with the votes, under pressure, of the continent’s countries, with the honorable exception of Mexico.

The Second Declaration of Havana reaffirmed the socialist and internationalist character of the Cuban Revolution, with emphasis on its significance for Latin American, examining the historical roots of the continent’s peoples, constantly facing imperialist intervention.

Precisely “to the peoples of America and the world” Fidel addresses the ideas that would be approved by that massive national general assembly, and pointed out that the U.S. did not fear the Cuban Revolution, but rather the Latin American Revolution.

In response to the accusation that Cuba wants to export its Revolution, we reply: revolutions are not exported, they are made by the peoples. What Cuba can give the peoples, and has given, is its example.

Fidel concluded with the phrase that Che would later quote at the United Nations:

This great humanity has said: Enough, and has begun to move. And this march of giants will not stop until true independence is won, for which they have already died, more than once, in vain.

This had been Cuba’s fate, but the nascent Revolution ended the era of useless sacrifice and consummated our emancipation. True to this inspiring example, Fidel asserted:

Now, in any case, those who die, will die like those of Cuba, those of Playa Girón, they will die for their definitive, true, irrevocable independence!