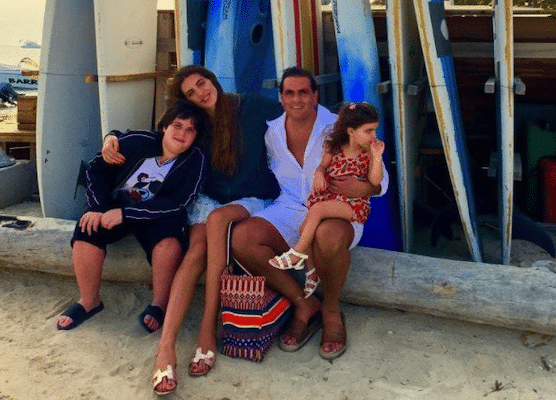 Camila Fabri and Alex Saab with two of their children, Jad and Mariam. (Photo: Twitter/@CamillaFSaab)

“Today, as we are speaking here, another day passes in which my husband Alex Saab, a Venezuelan diplomat, remains kidnapped,” she continued. Saab, a special envoy of the Venezuelan government to Iran and Russia, and Venezuela’s alternate ambassador to the African Union, was illegally arrested in June 2020 in Cape Verde while he was on his way to Iran on a diplomatic mission. Since then, the diplomat has been illegally held for more than 600 days, first in Cape Verde, and since October 16, 2021, in the United States.

Ambassador Saab, in an open letter, denounced the Cape Verdean authorities for torturing him for days—under U.S. orders—to force him to make false accusations against the Venezuelan government and President Nicolás Maduro. He detailed that he was imprisoned in a dark cell; his medicines were withheld, and later, even under house arrest, his personal physician was not allowed to visit him. After over a year of remaining kidnapped in Cape Verde, Saab was extracted by the U.S. without informing his legal defense team or his family. It has been alleged that Saab’s second kidnapping was carried out with such haste, just before general elections in Cape Verde, because polls had indicated that the ruling government, which was following U.S. orders, was slated to lose the elections.

In fact, on February 3 itself, James Story, the U.S. “ambassador” to Juan Guaidó’s fake government, who holds office in Bogotá, Colombia, claimed on a Colombian television channel that the U.S. government had always been in close coordination with Cape Verdean authorities in the matter of Alex Saab. Reacting to this news, Camila Saab asserted,

James Story just publicly admitted what we have been saying for 601 days, that what is happening to Alex is political persecution, that Cape Verde was used to kidnap Alex… They admit it without any shame, without any respect for the Cape Verdean people.

In the U.S. Federal Prison in Miami, where Saab is currently being held, he is being subjected to torture all over again. “His cell is freezing cold; he is kept in isolation, he is not allowed contact with anyone,” his wife described.

His emails are not given to him. I sent him an email today, and it will be given to him five to ten days later. While other prisoners are given their correspondence within a day or two, he is not.

“I cannot speak with Alex due to the shortcomings of the U.S. prison system,” Camila Fabri continued.

I have not been able to speak to him for four days. I don’t know how he is. I don’t know if he has eaten or slept, if he is well, if he is receiving medical attention. Since the day he has been in prison, he has not been allowed to see sunlight.

She explained how every day has been a torture for Saab’s family as well, and especially for his young children. “Since the day he left for Iran, he has not been able to see his children,” she lamented.

My youngest, Charlotte, just had her second birthday, and she does not know her father. Mariam will soon be five; she asks for her father every day. And Jad, he is 12, he needs his father the most at this time of his life. There has not been a single day when he has not wanted to be with his father.

Moreover, while Saab was illegally detained in Cape Verde, his parents passed away from COVID-19, in Colombia, the country of his birth. He was not allowed a last visit. His daughters were denied visas to visit their father in Cape Verde, and his sons were not allowed entry into the United States. Even his wife was never allowed to visit him; only his sister was allowed to see him in Cape Verde. Former UN special rapporteur on the negative impact of sanctions, U.S. lawyer Alfred de Zayas, has called the situation of Alex Saab “kidnapping coupled with arbitrary detention and torture.” Legal expert and professor Alena Douhan, who currently holds de Zayas’ former post, has also condemned Saab’s illegal detention and called for his release.

Despite using several illegal means to convict Alex Saab, the U.S. case is going nowhere. Seven out of eight charges against Saab were dismissed by the United States’ Department of Justice. Those seven charges were related to money laundering, while the remaining charge is conspiracy to commit money laundering. However, as is well known, the U.S. authorities refer to the evasion of illegal U.S. sanctions as “money laundering.” Since April 2018, when Alex Saab was conferred the status of diplomat by the Venezuelan government, he managed to bring much-needed food, fuel, medical supplies and equipment, and parts for the oil industry, etc., to Venezuela, bypassing the hundreds of illegal unilateral coercive measures imposed on Venezuela by the U.S. and the European Union. It is this life-saving work done by Saab that was branded “money laundering” by both Trump and Biden administrations.

In December last year, the trial against Alex Saab was suspended as his diplomatic status is being debated at the Eleventh Circuit Court in Atlanta, Georgia. The U.S. State Department refuses to recognize Saab’s diplomatic immunity, but Saab’s defense team in the United States filed an appeal in this regard in April 2021, and that case is ongoing.

While the U.S. government has not been able to achieve any of its objectives yet, it is trying to utilize lawfare and propaganda, using regional vassals like Ecuador and Colombia. On January 11, a group of right-wing National Assembly deputies of Ecuador, led by serial liar and offender Fernando Villavicencio, presented a “report” filled with inconsistencies, on Saab and his family’s supposed links to Colombian companies that committed various felonies, to Iván Duque, president of Colombia. Although the report was received with much fanfare by mainstream media, legal experts from both countries have exposed and condemned it as a fabrication.

“Those who are carrying out this media propaganda—with evident obsession—are desperate, because they have not been able to find anything [against Saab],” denounced Camila Fabri.

Alex has not done anything, but the media has not given him the presumption of innocence. We have all been attacked and demonized.

Alex Saab has already pleaded “not guilty” to all charges brought against him before the U.S. justice system. “It is really very simple—it means that he is innocent,” emphasized Fabri.

It is not a crime to fulfill a diplomatic mission. It is not a crime to bypass sanctions that are causing grave harm to an entire country. Helping a nation cannot be illegal. Being a representative of a government cannot be illegal. What is illegal are the unilateral coercive measures—UN rapporteurs have said this. What is illegal is the persecution of the representative of a socialist government.

Camila Saab pointed out that Alex Saab’s case represents a real danger to diplomacy at the global level. The U.S. government cannot have the last word on who is a diplomat and who is not; this violates all international treaties and conventions on diplomacy.

“We will continue to fight for the truth with all that we can, and we are going to win this battle,” she concluded.

Oscar López Rivera, world-renowned Puerto Rican independence activist and a political prisoner in the U.S. for 36 years, also participated in the event. He provided powerful words of encouragement to Camila Fabri and her family, gave advice based on his personal experience, and reiterated his support for the #FreeAlexSaab international campaign.