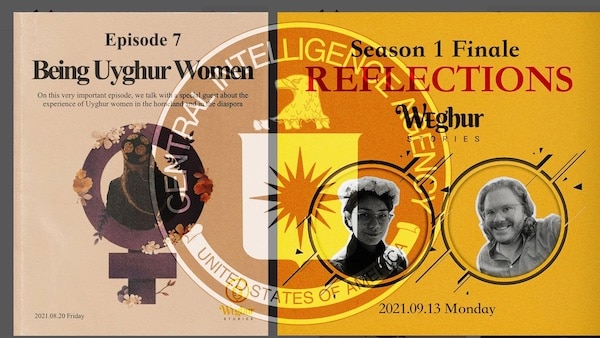 The U.S. embassy in France is funding an anti-China podcast that purports to speak on behalf of the Uyghur Muslim community, but was in fact co-created and is co-hosted by a non-Uyghur CIA veteran.

The co-creator, co-host, and producer of WEghur Stories, John Bair, describes himself on the podcast’s official website merely as an “American writer who specializes in helping other people tell their stories.”

But Bair is much more than that; he is a CIA veteran who specializes in information warfare.

It is not difficult to find ties between Bair and the notorious spy agency, which has organized anti-democratic coups d’etat around the world and has been complicit in targeted assassinations, torture, and drug trafficking.

Bair is a member of the board of directors of a Washington, DC-based advocacy group called Foreign Policy for America (FP4A).

The text of Bair’s biography on the FP4A website is completely different from his WEghur Stories bio, although both use the same photo.

The FP4A page reveals that Bair “is an alumnus of the CIA, where he served as an intelligence analyst, chief of staff, and public communications officer.” It adds that Bair “works at the intersection of national security and communications.”

The shady past of this co-host of a “Uyghur diaspora” podcast was first reported on Twitter by Arnaud Bertrand, a computer engineer and businessman who lives in Shanghai, China.

Bertrand was also quick to notice that the show is funded by the U.S. government.

The bottom of the WEghur Stories website discloses that this “podcast is made possible with support of the Embassy of the United States of America, France.”

There is this new podcast on Spotify called "Weghur Stories" that's supposedly about sharing "stories from the Uyghur Diaspora".

Not on closer observation, small 🧵 pic.twitter.com/HqaXfmYVlU

The U.S. government has spent millions of dollars funding Uyghur secessionist groups in China’s western Xinjiang province, which is geostrategically located at the heart of Beijing’s Belt and Road Initiative, a massive global infrastructure program that Washington has desperately tried to disrupt.

Uyghur separatist organizations in the diaspora that admit to seeking the “fall of China” have also been bankrolled by the U.S. government’s National Endowment for Democracy (NED), a CIA cutout created by the Ronald Reagan administration.

In an effort to demonize and destabilize China, the U.S. government has accused China of supposedly committing “genocide” against the Uyghur minority–even while the State Department’s own lawyers concluded that “there was insufficient evidence to prove genocide,” Foreign Policy magazine reported.

The US National Endowment for Democracy (NED) is a CIA cutout created by the Ronald Reagan administration.

Here the NED openly admits what we have been reporting for years at @TheGrayzoneNews: This CIA cutout bankrolls anti-China Uyghur separatist groupshttps://t.co/PijIA7Jnkq https://t.co/MVfGgAG8Nx

One of the most cynical examples of this strategy is an episode titled “Being Uyghur Women,” which exploits liberal feministic rhetoric to push anti-China propaganda.

This episode, which is co-hosted by Bair–the non-Uyghur white male CIA veteran–opens with a monologue on the importance of “empowering our women,” stating that “women should not be the entrusted and passive guardian of culture under the shadow of the male or state gaze.”

The episode condemns the government in Beijing as a violent patriarchal regime, declaring that, “In China, gender equality by engaging women in the workforce has never been achieved in any meaningful way,” and that Chinese women suffer from “rampant discrimination.”

Denouncing “the Chinese government’s brutality,” the episode proclaims, “We need to engage and critique patriarchy, stand tall against violence towards women and the queer community.”

“We should allow ourselves to be angry to grieve, and fight the Chinese state’s violence against us,” the podcast insists.

This rhetoric is very reminiscent of a recruitment advertisement the CIA published in 2021, in which an employee of the infamous spy agency proudly declared that she is an intersectional feminist.

In the video, the CIA agent describes herself in a poetic monologue as “intersectional,” a “woman of color,” and “a cis-gender millennial whose been diagnosed with generalized anxiety disorder.”

“I refuse to internalize misguided patriarchal ideas of what a woman can or should be,” the CIA officer proclaimed.

Art as a political weapon that advances U.S. foreign-policy interests

WEghur Stories is produced by a “multidisciplinary art lab” called The New Wild. Like the podcast, this company creates art that coincidentally coincides with U.S. foreign-policy interests.

Other projects produced by The New Wild include “Everybody Is Gone (Or, the Happiest Muslims in the World),” which the lab describes as “a large-scale art installation and performance whose process and outcomes are centered around offering reparative spaces to the Uyghur community, an ethnic Muslim minority group that is currently experiencing extreme oppression at the hands of the Chinese government.”

CIA veteran Bair served as director of communications for “Everybody Is Gone,” and The New Wild openly admits that the project “seeks to draw widespread public attention to the crisis, facilitate collective action to end it, and counteract the Chinese government’s objectives by providing a platform and resources for Uyghur art and culture to be preserved, perpetuated, and celebrated.”

Another The New Wild production, called “Tear a Root from the Earth,” is a musical that tells the story of how the Soviet intervention in Afghanistan in the 1980s hurt an Afghan family. The book for the dramatic work was written by John Bair, the CIA veteran.

The New Wild likewise produced a multimedia solo performance, “Letters From Home,” which focuses on “Cambodia suffering through the genocide perpetrated by the Khmer Rouge,” and “the hope inherent in immigration and the American dream.”

WEghur Stories and similar productions show how art and media can be repurposed to serve as a political weapon–one that just so happens to advance U.S. foreign-policy objectives.