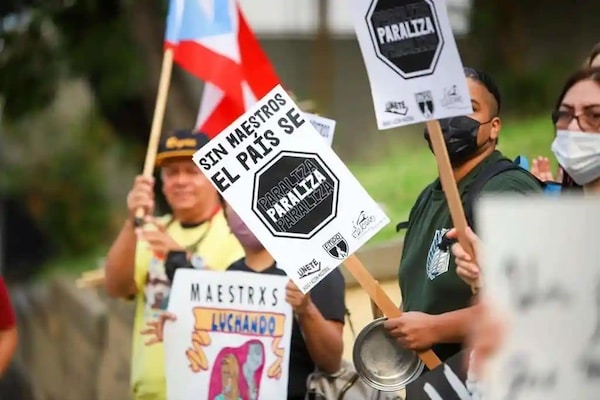 On Wednesday, February 9, teachers across Puerto Rico called for a national strike to protest the government and the Fiscal Control Board’s (FCB) cutting of wages and pensions. Other public sector workers, namely firefighters and police, have also joined them. Teachers are demanding a decent salary, an end to pension cuts, and the resignation of Puerto Rican governor Pedro Pierluisi.

Teachers have been protesting since February 4. That same day, the FCB imposed by the US Congress that has been in charge of Puerto Rico since 2016, was boasting because it supposedly already put the end of the bankruptcy process on track by approving a plan negotiated with the big bondholder funds. The plan contains a meager raise of $470 for teachers in the public system, divided in two stages. The “Ukrainian-American” Natalie Jaresko, Executive Director of the FCB, expressed her surprise at the massive protest that took place precisely when, for the first time in more than ten years, a salary increase for teachers was announced.

In fact, the massive teachers’ protest on Friday, February 4 was a surprise to more than just her. The action which saw the vast majority public school workers walk off the jobs was not called for by the union that officially represents them, the Teachers Association, nor by any nationwide organization. Thousands gathered on the south side of the Capitol in San Juan from where they marched to Fortaleza, crowding the streets of the old city, while others organized protests in different parts of the country. A large number of students joined the marches or held solidarity demonstrations in their own schools.

However, anyone who has lived in Puerto Rico during the last decade, or has been following the news during that time, cannot express surprise at the outbreak of protest on February 4, nor for those that will surely come in the coming months. The accumulation of social grievances is a process similar to the heating of volcanoes before they erupt.

During the last twelve years, no Puerto Rican public employee has received a salary increase. In the case of public corporations, which negotiate collective bargaining agreements and whose employees have the right to strike, the FCB took control of their finances five years ago. All previous negotiations between the government as employer and its employees were at the mercy of the Board. During that long period, which still persists, everyone who works for any public entity had their salary frozen.

As for the so-called “benefits”—healthcare, vacations, sick days, retirement, etc.—the situation is even worse. It used to be said that public employees earned less than others in the so-called private sector, but, unlike the latter, they were guaranteed a retirement pension, along with other benefits. All of that disappeared or changed as of 2016 and, right now, no one in the public system has any certainty about what the future holds.

Workers in the so-called private sector have not been having a better time. The minimum wage that companies must pay did not change during that long time, while legislated benefits were reduced. In 2017, mandated by the FCB, a so-called “labor reform” was imposed that limited overtime pay, made working hours more flexible, made firing workers cheaper and easier, increasing precariousness for all. At the beginning of 2021, the Legislature which was elected the previous year initiated a process aimed at restoring some of these rights, but so far nothing has been done.

While this process of dispossession is taking place, unfettered capitalism continues its course. The press informs us that inflation continues unabated and that the latest increase in the prices of the so-called “basic basket” (the products indispensable for living) is the highest in the last thirteen years. For food products, the increase was 17%, while gasoline and other petroleum products shot up to 30%. Every year we have suffered increases, but the last one has been worse. Those of us who live in Puerto Rico, and especially those who work in the public sector, have to face this continuous increase in the cost of living, while salaries stagnate or are reduced, and benefits disappear.

The government must defend teachers

Earlier this month, the Popular Front for the Defense of Public Education (FADEP) demanded that both the Legislature and the Executive Branch have the backbone to defend teachers against the Fiscal Control Board (FCB) and to approve bills that will guarantee dignified retirement, a salary increase, and compensation for professional studies.

The Front is made up of the unions Puerto Rico Teachers Federation (FMPR), UNETE and EDUCAMOS. The unions made their demands in the midst of a caravan held last Friday, which departed from the old headquarters of the Department of Education, passed by the Teachers’ Retirement System, the Federal Court, and concluded at the Capitol. Once at the Capitol, the spokespersons of the Front were received only at the offices of Senators María de Lourdes Santiago, of the Puerto Rican Independence Party (PIP), and Rafael Bernabe, of the Citizen Victory Movement (MVC), who are in favor of the bills, as confirmed to CLARIDAD by Mercedes Martínez, president of the FMPR. The Front will be lobbying the rest of the legislators this week.

“The legislature and the governor have clearly defined whose side they are on, and it is not on the side of the working people. They had in their hands the ability to stop the Board through PC 1003, later approved in Act 53, and they did not know how to take advantage of it. Thanks to their decision, they allowed the approval of the Debt Adjustment Plan, which will mean misery for the people of Puerto Rico and, in the case of teachers, implies draconian cuts to teachers’ pensions. That is why, beyond empty words, we demand commitment on your part in the approval of the aforementioned bills and the backbone to defend them before the dictatorial Board. The teachers are paying attention, they are organizing and will do whatever they have to do to defend their retirement,” indicated the leaders of the FADEP, composed of Mercedes Martinez of FMPR, Liza Fournier of UNETE, and Migdalia Santiago of EDUCAMOS.

From the Capitol they went to La Fortaleza, where they were received by the governor’s economic development advisors, Yamil Ayala and Yolanda Rodríguez. The advisors promised on January 31 that they would communicate with them to let them know Fortaleza’s decision on the three projects. In addition, Martínez revealed that the advisors promised to coordinate a meeting for Wednesday, February 3, with the director of the Government Retirement Board, Luis Collazo Rodríguez, to discuss the particular case of the teachers.

In addition to waiting for the governor’s response, the spokeswomen asked to speak with the governor to request “a meeting without intermediaries, with someone who can make a decision, in this case, the governor. As long as this does not happen, we will continue to escalate our efforts in the streets with the teachers of this country”.

Meanwhile, Migdalia Santiago, president of EDUCAMOS, stressed: “It is time to achieve justice for a sector so mistreated and marginalized by all the administrations that have governed the island. We will celebrate 14 years in February without a salary increase to the base scale, and now, on top of that, they are running over us with a pension of indigence. We are not going to accept this, so we are going to defend ourselves with all the means at our disposal”.

The president of UNETE stated, “This is shameful, outrageous and that is why we will be fighting the battle from all fronts: the Legislature, the Executive, the federal court, including the most important front: the street.”

The teacher movement leaders pointed out that their battle did not end with the caravan. They are organizing the teachers, school by school, in assemblies, consultations and other activities that they will be announcing soon.

The projects demanded by the Front should not be confused with the Control Board’s announcement that it granted a conditional raise to teachers. Martinez indicated that the Department of Education (DE) asked the Board for an increase of $1,000, for which it identified the funds. The Board cut this figure to less than half ($470).

This increase was also rejected by the leader of the Teachers Association (AMPR) recognized by the Department of Education. In a press release, the president of the Association, Víctor M. Bonilla Sánchez, said he was disappointed and assured that this constitutes a “crumb” compared to what active teachers will lose after the Debt Adjustment Plan goes into effect.

“We met with the Board and indicated to them that, at a minimum, this raise should bring the teachers’ base salary to $3,500 to at all compensate for what our educators will lose with the freezing of their retirement benefits. Today we are surprised with this proposed increase, which is very little, and, to top it off, it comes with conditions that seem absurd to us,” Bonilla Sanchez said.

The Association indicated that the FCB’s proposal would raise the teacher’s base salary to $2,220 monthly. But the proposal splits the effective date of the raise to teachers into two phases. The first phase would be granted in July of this year and the second, in January 2023, would be conditional, depending on fulfilling a 90% digital attendance record for teachers and students. The president of the AMPR indicated that the Board’s proposed increase does not even match the efforts being made in the Legislature to bring the teachers’ base salary to $2,700. Bonilla Sanchez insisted that the Board and the Government must identify sources of funding to achieve true salary justice to educators.

The English version of this article from Claridad Puerto Rico was done by Natalia Marques.