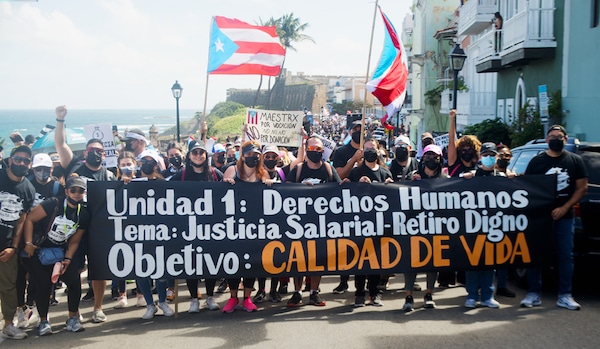 A massive protest of teachers filled the streets of San Juan today as they marched to the governor’s mansion demanding a salary increase and a dignified retirement pension. Known in Latin America as a cacerolazo, many of the protestors banged on pots and pans and other kitchen utensils.  They were beaten loudly and constantly and in rhythm to express their discontent with Puerto Rican Governor Pedro Rafael Pierluisi Urrutía and his neoliberal and colonialist policies and his capitulation to Wall Street’s dictates.

The leaders of the teachers’ union indicated that the protests and demonstrations, in their various forms, will continue to increase until the government responsibly and permanently addresses their just demands.

Teachers in Puerto Rico are fed up and of the 20,000 public school teachers over 70% walked off their jobs on Wednesday. The discontent comes just weeks after a federal judge in the U.S. approved a restructuring plan to repay creditors at a discounted rate. Even at that the creditors are first in line to be paid over public workers. The base salary of teachers in Puerto Rico is around $20,000 a year and they have not had a raise in 13 years proving once again the colonial status that Puerto Rico finds itself in.