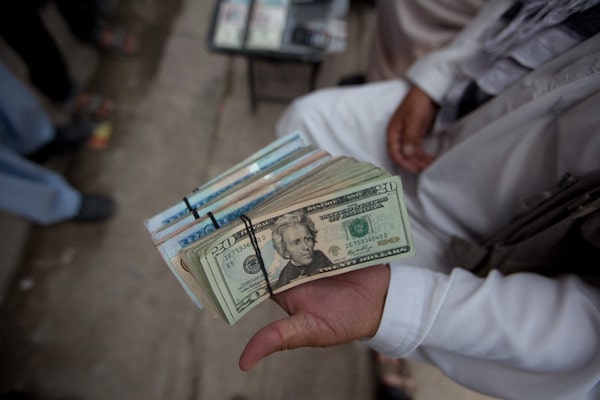 Last summer, after decades of killing Afghans in Afghanistan, the U.S. government decides to move its occupation forces out of that country.

The operation was badly prepared, (or intentionally sabotaged by the Pentagon), and ended in chaos. More than 120,000 Afghans, most of them higher educated ones, were also taken abroad. This alone was severely damaging to Afghanistan.

Now the Biden administration, ignoring the various owners of those funds, has decided to steal all of them.

This is vengefulness at the most inhuman level:

President Biden will start to clear a legal path for certain relatives of victims of the Sept. 11, 2001, attacks to pursue $3.5 billion from assets that Afghanistan’s central bank had deposited in New York before the Taliban takeover, according to officials familiar with internal deliberations.At the same time, Mr. Biden will issue an executive order invoking emergency powers to consolidate and freeze all $7 billion of the total assets the Afghan central bank kept in New York and ask a judge for permission to move the other $3.5 billion to a trust fund to pay for immediate humanitarian relief efforts and other needs in Afghanistan, the officials said.

Afghanistan is in dire need of those reserve funds.

As its central bank had no access to the funds it could not intervene when the Afghan currency devaluated after the U.S. and its minions had fled. It has made it impossible for the government and the people to acquire food from abroad. The United Nations and many other organization have warned that millions of people in Afghanistan are in imminent danger of dying for lack of food. A new huge wave of refugees is fleeing the country and is likely to destabilize its neighbors.

It was a bad move to freeze that money. It is unscrupulous to steal it. It also illegal under U.S. law which is why the Biden administration decided to fudge it:

It is highly unusual for the United States government to commandeer a foreign country’s assets on domestic soil. Officials are said to have discussed a two-part legal process for Mr. Biden to engineer that outcome.First, he would use emergency powers under a provision of the International Emergency Economic Powers Act to “direct and compel” that a foreign country’s assets in the United States be moved to a segregated account. That would block them, but the Afghanistan central bank would still own them.

Second, officials have discussed then using a provision of the Federal Reserve Act that permits disposing of property belonging to the central bank of a foreign nation — so long as it has the blessing of someone the secretary of state has recognized as being “the accredited representative” of that foreign country.

But deciding who qualifies as such a person, at a time when Afghanistan’s former government no longer exists, has raised significant complications. It remained unclear what solution Biden administration officials had settled on and whether the name of any person or people they deem as such would be disclosed for security reasons, like possibly endangering family members still in Afghanistan.

The ‘accredited representative’ will simply be claimed to exist and to have given ‘the blessing’ but will never be named.

To give money that is owned by Afghanistan’s central bank and is needed to help Afghan people to relatives of people who died in 9/11 is completely unjustified. The Taliban who are now ruling Afghanistan are not the same ones who ruled the country previously. Moreover no Taliban ever knew beforehand that 9/11 was planned by some people who at that time lived in Afghanistan. They are not responsible for 9/11.

Moreover the money is simply not theirs. Central bank assets are owned by the central bank not by a ruling government of whatever kind. The U.S. Federal Reserve is not holding Democrats or Republican money nor is the Afghan central bank holding Taliban money.

In an interview, Dr. Mehrabi — who is also an economics professor at Montgomery College in Maryland [and a longtime member of the Afghan central bank board] — contended that the central bank should be seen as independent of the now Taliban-led Afghan government. He said that many civil servants there knew how to run the bank, and that depriving the bank of the funds it needed to maintain price stability would lead to runs on commercial banks, mass defaulting on loans and ultimately broader disaster.“You’re talking about moving toward a total collapse of the banking system,” he said. “I think it’s a shortsighted view.”

But an administration official familiar with the government deliberations argued that the “sad reality” was that even if the central bank regained access to the assets in New York and moved them all into Afghanistan for one last injection of capital, it would not solve the deeper structural problems that have sent the country’s economy spiraling into ruin.

The Afghan people shall just die from the ‘structural problems’ that have been caused by the U.S. occupation, its abrupt end, and are now caused by the theft of  their money.