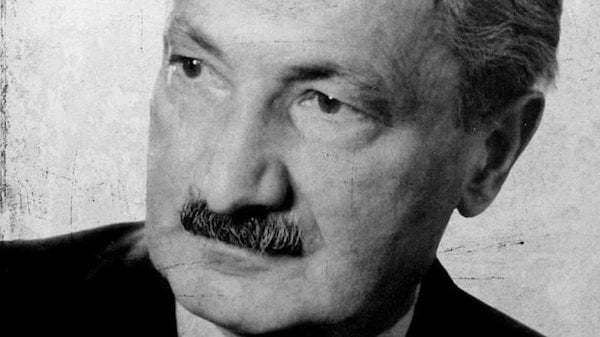 Martin Heidegger isn’t a philosopher that progressives are likely to consider worthwhile reading. After all, he was an anti-Semite, a follower of Hitler, and most hideous of all, someone who likened the mass extermination of human beings to the excesses of factory farming.

Nevertheless, his fame and influence continue to grow. His collected works have weighed in at 90 volumes, more than enough to keep generations of graduate students at work on their PhDs well into the next century. Most of them, I am happy to say, will not be graduate students in philosophy.

Heidegger’s greatest influence is with students of the arts and of literature who, shame to say, perpetuate his baneful Nazi influence into the future. So let me give a preliminary rundown on some important writing on Herr Heidegger. A book by Daniel Morat came out in Germany several years ago: Von der Tat zur Gelassenheit: Konservatives Denken bei Martin Heidegger, Ernst Junger und Friedrich Georg Junger 1920-1960. This 592 page work on conservative thought (the conservative movement is welcome to all three of these men but I am only going to discuss Heidegger) was reviewed by George Steiner (Cambridge University) in the June 27, 2008 issue of the Times Literary Supplement.

Steiner tells us some interesting things about Heidegger studies. That 80+ edition of his works I mentioned above, for instance, “continues to generate disturbing uncertainties as to editorial method.” There are questions about the integrity of the German text. There is fear it is being “cleaned up” so that overt Nazi expressions or ideas will be eliminated. Since English translations will be made from this edition, the fear is that unsuspecting students in the USA and elsewhere will be infected with a subtle form of Heideggerian fascism without knowing it. Even worse, or at least just as bad, the next generation of German students will not realize the overt Nazi sympathies of Heidegger.

Outside of his disciples, who practically worship him, Heidegger’s reputation among professional philosophers is mostly negative. Marxists don’t like him, and the English speaking philosophers in the Analytic and Positivist movements (Wittgensteinians, Carnapians, etc,) consider him, Steiner points out, “an impenetrable, loquacious, charlatan… [whose] hectoring verbiage [is] fatally tainted by and interwoven with his politics.”

What is morally hideous about Heidegger is that even after WW2 and the actions of the Nazis were public knowledge, Steiner reminds us that “he never renounced his idealization of the National Socialist movement [and] refused to condemn the Final Solution….” How is it possible that this man remains an intellectual light to many Western intellectuals and academics?

Steiner asks just what is the relation of Heidegger’s philosophy to Nazism? His critics, such as Karl Löwith (1897-1973) Karl Jaspers (1883-1969) and Habermas, find “a fundamental organic link” in his philosophical views [Sein und Zeit for example] “and his involvements with Hitlerism.” His supporters, Derrida (1930-2004) and others “in the deconstructionist ambit,” ”have denounced this very question as an impertinent vulgarity.” It seems that Heidegger was such a great thinker it would have been impossible for him to really be a Nazi at heart. Steiner quotes the philosopher Gadamer (1900-2002) as calling him “the greatest of thinkers.” Nevertheless, as the review makes clear, “Heidegger’s strategic silences and self-justifications after 1945 can be held to put in doubt any claims to intellectual integrity and philosophical seriousness.”

Steiner points out that other books have documented Heidegger’s relations with Ernst Junger (1895-1998) and Carl Schmitt (1888-1985) and how they “sympathized with Nazism and attempted various apologetic manoeuvres after the debacle.” What Morat brings to the table with his new book is the role of Freidrich Georg Junger (1898-1977) Ernst’s younger brother–an important member of the “conservative revolution.” All of these men were allied in their contempt for “sickly bourgeois-liberal values” (let alone Marxism!).

As I said above, I am dealing with Heidegger so I will not go into the role of the Jungers. Heidegger, in the true Nazi spirit, saw Western civilization in intellectual and cultural decay (for different reasons than Marxists) and in need of rebirth along the lines of Mein Kampf. Heidegger with his commitment to the concept of “destiny” blames the decline of the West on Plato (427-347 BC)! That is how far back we have to go to find how our understanding of “destiny” had been “deflected.” In more modern times the “rationalism of Descartes” (1596-1650) was also to blame and would have to be overcome for a “genuine rebirth.”

So, Hitler was the tool “chosen”, as it were, by destiny to bring about the rebirth of our degenerate civilization. Steiner tells us why 1945 was “a disaster of virtually cosmic proportions” for Heidegger. It was because Heidegger thought the only language that real philosophy could be done in (other than ancient Greek) was the German language and that German culture was “the elect carrier of supreme philosophical illumination.”  With the downfall of the noble Germans only the American-Soviet hegemony was left–both members of which represented materialistic technological scientism when compared to the great spiritual values of the Reich.

Steiner ends his review saying that there are at least four questions that remain unanswered with regard to Heidegger. The origin of his “mesmeric” style, his claim that his works are “provisional” for “a time in which men have not yet learned to think” [choosing Nazism indicates there was no thinking going on] his belief that “salvation lies with the poets” Holderlin (1770-1843) and Sophocles (496-405 BC) and finally the connection between  Sein und Zeit  and its stress on “Sorge” (concern) and his Nazism.

Finally a question “that really matters” even more than these four. How did Heidegger and others, “of such stature”, let themselves “become enmeshed in the politics of the inhuman?”

A preliminary answer may be that people really don’t understand the latent Nazism in Heidegger’s thought so his “stature” is undeserved. Also, maybe Nazism is not as “inhuman” as we like to think. It is rather one of the possible outcomes of capitalism under stress. The attempted extermination of the Native Americans, slavery, the holocaust, Vietnam, Apartheid, the Taliban’s, and others, treatment of women, the ethnic cleansing of Palestine were all done and are being done by humans–not just by Nazis. The problem is humans motivated by racism and/or greed for the lands and wealth of others due to an economic system predicated on profit and financial conquest. To understand Sein und Zeit  we must first understand Das Kapital. Only in the socialist future, when we are fully human, will we understand what was “inhuman” in our past.

​​Thomas Riggins  is a retired philosophy teacher (NYU, The New School of Social Research, among others) who received a PhD from the CUNY Graduate Center (1983). He has been active in the civil rights and peace movements since the 1960s when he was chairman of the Young People’s Socialist League at Florida State University and also worked for CORE in voter registration in north Florida (Leon County). He has written for many online publications such as People’s World and Political Affairs where he was an associate editor. He also served on the board of the Bertrand Russell Society and was president of the Corliss Lamont chapter in New York City of the American Humanist Association.