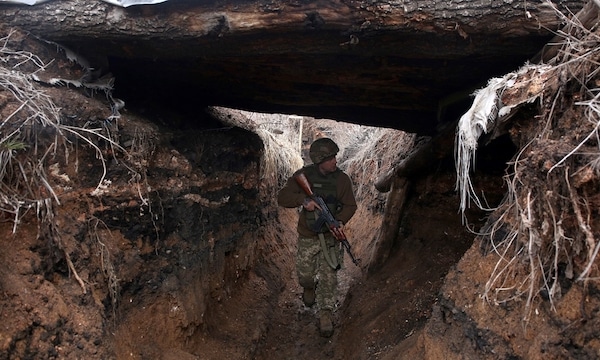 A Ukrainian serviceman patrols along a position at the front line with the eastern rebels not far from Avdiivka, Donetsk region, Ukraine. Fears have mounted of an escalation of the conflict in eastern Ukraine, where government forces have battled the rebels since 2014. Photo: AFP

As the Ukraine crisis becomes ever more complex, with the U.S. claiming that Russia is planning for an imminent invasion while Moscow continuing to deny it and accusing Washington of spreading fear via disinformation, Chinese analysts said Washington needs the crisis to remain heightened even if Russia has no intention of using force.

Chinese analysts said Sunday that keeping the crisis intense will benefit the U.S. in several fields: legitimizing its military presence in Europe by demonizing Russia and poisoning Russia-EU ties, increasing uncertainties and concerns to harm the eurozone economy so there will be more capital flight from the continent to the U.S. and thus easing the U.S. inflation pressure, and using the tension to stir up trouble for China-Russia ties. 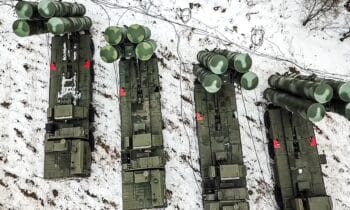 Combat crews of the S-400 air defense system taking up combat duty during joint exercises by Russia and Belarus on February 9, 2022 which center around “suppressing and repelling external aggression” amid Western claims that Moscow is plotting a major escalation of the conflict in Ukraine. (Photo: AFP)

Therefore, the U.S. is using all means to maintain the heightened tension, including spreading disinformation and strengthening military deployments to provoke Russia – in other words, the U.S. is sacrificing Ukraine’s security to serve its own strategy to compete with Russia, experts said.

Russian President Vladimir Putin had telephone conversations with French President Emmanuel Macron and U.S. President Joe Biden on Saturday, TASS reported on Sunday. Conversations were held at the request of Paris and Washington.

Putin reminded his counterparts that “the West does not do enough to force Ukraine to perform the Minsk Agreements” and said “the Russian response to the U.S. and NATO answers on security guarantees will be presented shortly.”

Paris said after the conversation that they do not believe that Moscow “is preparing an offensive” against Ukraine, while Washington stated that it is still unclear whether Russia plans to achieve its goal diplomatically or “by way of using force.”

Analysts said no party can bear the consequence of the situation out of control totally, and if conflict breaks out, the U.S. would not be the losing party, and could even benefit if the conflict remains limited. In this scenario, it would harm Ukraine and its neighbors, so Washington is the one that potentially welcomes a conflict, not Moscow, Kiev, Paris or other parties.

The Chinese embassy in Ukraine released a notice on its WeChat public account Friday to urge Chinese nationals in Ukraine to “pay close attention to” changes in the local situation, as the U.S. and several other Western countries asked their nationals “to evacuate immediately” amid so-called warnings of an imminent invasion by Russia.

The notice said “the epidemic situation is worsening in Ukraine, and it caused multiple cases of Chinese nationals getting infected in Ukraine or found to be infected after returning to China. At the same time, the Ukraine-Russia tensions have drawn attention from many parties, and different types of contradictory information have emerged.”

The embassy urged Chinese nationals in the country to strengthen epidemic prevention and pay close attention to “the changing situation” of Ukraine crisis.

Some other countries are not as calm as China. Following the U.S. and the UK, many Western countries, including Australia, Italy, Israel, the Netherlands and Japan have told their citizens to leave Ukraine. Some have evacuated diplomatic staff and their families.

Jin Canrong, associate dean of the School of International Studies at the Renmin University of China, said the Chinese embassy notice is probably based on concern over the U.S. to further meddle in the situation by creating chaos, rather than echoing the Western estimation over Russia’s military operation against Ukraine.

“It’s totally unnecessary for Russia to invade Ukraine at this stage unless Ukraine launches attacks against Crimea or the Eastern Ukraine regions first. But Washington continues to pay great efforts to hype the information about ‘Russia’s invasion’ in the past few months, even though the information sounds very unrealistic and it’s harmful for the situation. So the U.S. is doing this for its own reasons,” Jin said.

The most reasonable analysis is that a worsening situation could force European capital flight for safe havens in the U.S., and this could ease U.S. pressure on inflation, as the U.S. has done such things before, said Li Haidong, a professor from the Institute of International Relations of China Foreign Affairs University.

But the European capital is mature, and there are no signs of large capital transfers to U.S. market, so perhaps this is why the U.S. is making efforts to ramp up the tensions, Jin said.

Li said that keeping a military deterrence but not attacking Ukraine is the best choice for Russia at the moment because Moscow needs to make NATO feel the risks and does not want Ukraine to join NATO. A hot war will ruin everything and neither Moscow nor Kiev can afford such an unpredictable scenario.

“It’s possible that if Moscow and Kiev both keep calm, the U.S. would use its proxies, such as NGOs or agents in Ukraine to create new troubles or to spark conflicts between Russia and Ukraine. This is what we need to pay attention to, rather than worrying about a so-called ‘Russian invasion’ hyped by the U.S.,” Jin noted.

What China can do?

On Sunday, Australia followed the U.S. to urge China to help them push Russia, with Australian Prime Minister Scott Morrison calling on China to not remain “chillingly silent” on the crisis. On Thursday, U.S. Ambassador to the UN Linda Thomas-Greenfield said “We would hope that the Chinese would play a role in encouraging the Russians to do the right thing.”

Chinese analysts said the attempt is clear, as Washington wants to create a trap for China – if China does what they say based on their information about Russia’s invasion, then China-Russia ties would be harmed, but if China does not act they can accuse China of remaining “chillingly silent.”

Chinese Ambassador to the UN Zhang Jun responded on his Twitter account on Thursday immediately that “Our message is consistent and clear: Resolve any differences through diplomacy. Stop hyping up the tension. Russia’s legitimate security concerns should be seriously addressed.”

China is not a main actor on the crisis, and if there is anything China could do to mediate, the relevant parties need to bring the negotiation to the UN Security Council, however it seems like the U.S. and NATO do not want to solve the problem through the UN platform but prefer talking to Russia directly, Yang said. “So how could they expect China to get involved in such an issue deeply?” Yang noted.

Jin said China does not need to take U.S. or Australian officials’ remarks seriously, as they just want to stir up trouble for China-Russia relations. China needs to keep close watch, oppose any act to hype up tensions by spreading fear via disinformation, and urge relevant parties to solve the problems via diplomacy.