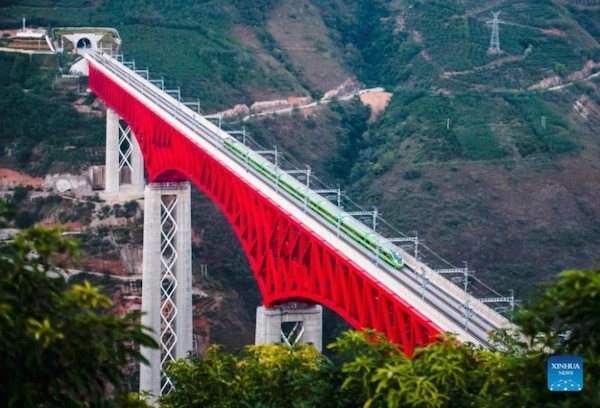 The China-Laos Railway provides a major goods transport link for ASEAN countries and China. Photo shows an electric multiple unit (EMU) high speed passenger train as it crosses a major bridge over the Yuanjiang River in southwest China’s Yunnan Province. The China-Laos Railway is a flagship project of the Belt and Road Initiative (BRI). (Xinhua/Wang Guansen)

Business operators from Cambodia, Thailand, Vietnam and Myanmar are now using the Laos-China Railway to import and export goods to and from China and beyond. Over 100,000 tonnes of cross-border goods have been shipped via the railway since it became operational in December, 2021.

In early December 2021, Laos inaugurated the Boten-Vientiane railway, a 414-kilometer (km) electrified high-speed railway that runs between the capital Vientiane and the town of Boten on the Laos-China border (see map below).

The Laotion Times reports that the railway was designed to be a green and low-carbon electrified railway that will contribute to further development in the ASEAN region. The project runs through five provincial regions in northern Laos and is powered by a 115kV transmission line. The project includes 2,220 transmission poles with a total length of 936 kilometers with links to 24 traction substations.

The project is significant in terms of environmental and ecological protection because it employs the same building standards and cutting-edge technology utilized in China to decrease environmental risks.

The US$6 billion project is backed by China as part of its Belt and Road Initiative (BRI) and is a linchpin of the deepening ties between the two countries. Traveling to the Chinese border now takes less than four hours compared to the 15 hours by car and costs US$33 for a second-class seat. At Boten, the line heads north some 595km before ending in Kunming, the capital of China’s Yunnan province, and could significantly transform connected this landlocked mountainous country and attract greater foreign investment and tourists. Logistics costs from Vientiane to Kunming are expected to drop by some 40 to 50 percent. 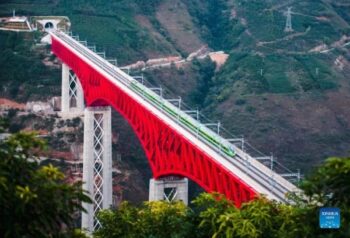 The China-Laos Railway provides a major goods transport link for ASEAN countries and China. Photo shows an electric multiple unit (EMU) high speed passenger train as it crosses a major bridge over the Yuanjiang River in southwest China’s Yunnan Province. The China-Laos Railway is a flagship project of the Belt and Road Initiative (BRI). (Xinhua/Wang Guansen)

Lao National Chamber of Commerce and Industry vice-president Daovone Phachanthavong told Vientiane Times that more goods are being shipped between China and ASEAN member countries through the railway.

The Laos economy is expected to improve this year now that the Laos-China Railway is in use. Businesses in Laos, Vietnam, Thailand, Cambodia and Myanmar are increasingly engaged in trade with China using the railway.

Thailand recently exported its first shipment of 1,000 tonnes of rice to Chongqing in China using the Laos-China Railway.

Adviser to the Thai agriculture minister, Alongkorn Polabutr, was quoted in the Bangkok Post as saying that the Thai government was looking into exporting fruit, orchids, rubber, cassava, palm oil and fishery and livestock products by the new rail route. 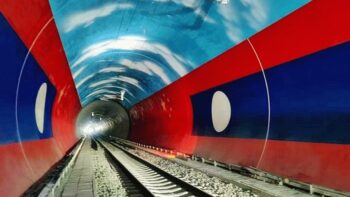 In less than 2 months of operation, the railway has carried over 100,000 tonnes of of cross-border goods.

Opening for service in December, the Laos-China Railway has opened up the possibility of extending export routes to Central Asia, the Middle East, Russia and Europe.

“Many companies are considering investing in Laos because goods from ASEAN countries can now be sent to Europe through the Laos-China Railway,” Daovone said.

Rice and coffee from Laos have been shipped to Europe by rail, which saves a lot of time compared to sea transport.

Shipment of goods from the ASEAN bloc to Europe by rail will take just over 10 days, which is much quicker than transport by sea, which takes about 45 days. 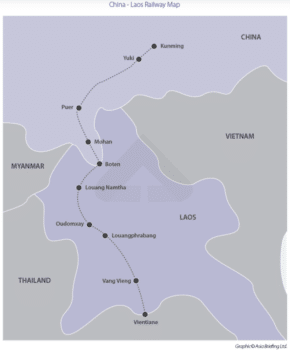 The Laos-China Railway has so far transported more than one million passengers and 500,000 tonnes of cargo including 100,000 tonnes of cross-border goods since it became operational in December, according to Xinhua News Agency.

The Thai government has ordered the State Railway of Thailand to design and build a new bridge that will connect Nong Khai province to the railway in Vientiane.