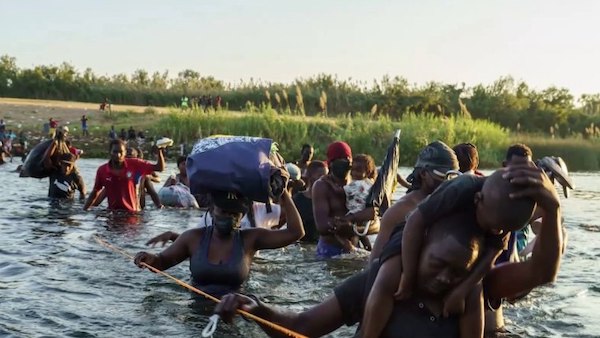 President Biden recently reached an agreement with Mexico to reinstate the Migrant Protection Protocols (MPP), a program instituted by the Trump administration. It requires tens of thousands of migrants to pursue their requests for asylum outside of the U.S., living in horrifying conditions on the Mexican side of the border until it is their turn to attend a hearing. While Biden initially moved to end the program, a Texas judge ordered the administration to continue MPP until it went through the proper administrative process to end it. The administration, having received the appropriate legal coverage, not only reimplemented the program with minimal changes (to the horror of not just advocates but even asylum officers at the border), but broadened its scale–any migrant from a Western Hemisphere nation can be sent back under the program.

While advocates have rightly decried the deeply inhumane (and likely illegal) nature of MPP and its current expansion, it is worth noting that MPP is precisely the kind of creative cruelty that our economic system dictates to handle the increasing human cost of its worst excesses. Migration controls have always had to adjust to capitalism’s contradictions and demands, which explains why these exploitative migration policies are bipartisan.

Migration in the U.S. is consistently tied to the question of labor in its political economy. The human bodies displaced by capitalist imperialism, neoliberalism’s excesses, and the ongoing need to extract surplus-value dictate that a large army of exploitable and controllable individuals remain available. Agriculture, the U.S. military-industrial complex, and domestic service industries have all benefited from the availability of cheap migrant labor. Conversely, there have always been tensions within the local working and ruling-class, with issues of race and xenophobia at times cutting against broader capitalist needs (but often working in tandem with them). Regardless, migration flows and their governance exist in a broader cycle of displacement and reabsorption. MPP, together with the us e of Title 42 (a little-known health law that allows for expedited expulsions of people trying to enter the U.S. on public health grounds) is but the latest and greatest form of this, a means of tightly regulating migrant flows into the U.S., as even failures of capitalism increase the waves of human bodies cast upon its shores.

It would appear at once that MPP is at odds with the national labor shortage here in the U.S.. As headlines have decried for months, “there are no workers,” even as employers have raised wages and benefits, the labor shortage continues. It seems like the perfect time, as capitalists have done in the past, to pull in exploitable individuals, like immigrants, to fill jobs and effectively squash whatever pressure the working-class has to demand better conditions. And historically, amplifying migration has often followed to fill in the gaps in domestic labor markets (consider the Bracero program, for example).

But we should not confuse the driving forces of capitalism with unified conspiracy. There are also plenty of incidences where industries, social, and/or political players are at odds with migration, even if it would ultimately boost capitalism as a whole. These interests are not monolithic, nor do actions track along purely teleological goals of capitalist development. The Chinese laborers who helped build the railroad across the U.S. were not free from racism, and the titans of agriculture in the early 20th century wanted migrants as workers, not fellow citizens. And here enters the politics part of the economic question—control of the borders remains of foundational interest to state power.

This was true, for example of Reagan’s celebrated “amnesty” of 1986, where part of the tradeoff to allow 3 million immigrants to gain status, was also to provide sanctions for employers and “humanely regain control of our borders. . .” This came off the back of two recessions in the early 80s with large sectors of the economy having an abundance of labor (and therefore, far less need for laborers). A number of pundits and politicians had made a great deal of hay in the late 70s pointing to undocumented migration as an out-of-control invasion from Mexico and this perception became an enduring one even as migration numbers had leveled off. Even though he was to sign the law a year later, Reagan benefitted a great deal from this threat narrative, calling undocumented migration “a threat to national security” (and a Communist one at that).

Yet, as Reagan himself acknowledged he actually saw the law not as a boon to migrants but as a means of to “remove the incentive for illegal immigration by eliminating the job opportunities which draw illegal aliens here.” This, of course, runs wholly afoul of both capitalism’s cause and effect around migration, as the reserve army of labor is essential to prop up the economic system. As such, the labor penalties (which would have been leveled against industry, not migrants) never fully gained traction or teeth. However, border enforcement, another essential ingredient to the 1986 law, escalated dramatically and has largely continued to grow ever since. What has been painted (and sold) as an enduring image of humanitarian protection, always was and has been about control.

At times the contradictions of political economy can work together, but as is the case with the 1986 law and MPP, the border becomes a central focal point of state action because control becomes central to that calculus. It is unlikely that Biden is looking around the U.S. and saying, “why don’t we just fill all these empty jobs with immigrants.” Rather, the political pressure from the U.S. right, together with the reality that there is no ready mechanism for quickly undoing MPP makes the administration’s continued use and enforcement of it more and more appealing. Labor needs, while undoubtedly a long-term problem, must cede to the short-term issue of having both political and physical control of the border (or at least to appear to).

The political jollies Trump gained by instituting such draconian measures have given the right a whole new lease on life and a means to not only scapegoat migrants but ultimately challenge any possible progression away from that agenda. Trump’s agenda has given Biden an out–the injunction against repealing MPP quickly and required expansion of detention expansion allow the state to continue a documented inhumane practice (within the greater inhumane immigration structure). At this particular political-economic moment, there is little need for progressive popularity, but the 1.7 million migrant apprehensions along the U.S.-Mexico border (an all-time high), have propelled a state need to assert some sort of control and disincentives to reduce migration.

Thus, the tens of thousands of people subject to MPP, are reduced to playthings again in the capitalist system, bandied about to be pitied when politically expedient, enemies of national security and well-being otherwise. While much could be written about the empty words Democrats so often spill over the humane treatment of migrants, the ongoing cycle of repression in a bid to maintain political control and power speaks for itself.

Daniel Melo is a public sector immigration lawyer in the American Southeast. His book, Borderlines, is out now from Zer0 Books.