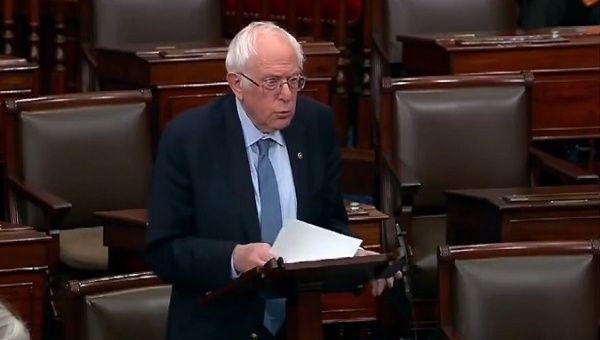 On Thursday, Senator Bernie Sanders argued that the United States behaves hypocritically when it does not accept Russia’s need to control the expansion of the North Atlantic Treaty Organization (NATO) towards its borders.

“For the last 200 years, the American foreign policy operated under the Monroe Doctrine, which gave the country the right to intervene in any nation that might threaten its alleged interests,” Sanders recalled.

Under this doctrine, the U.S. undermined and overthrew at least a dozen governments. In 1962, it even came to the brink of a nuclear war with the Soviet Union in response to the placement of Soviet missiles in Cuba, which former President John Kennedy’s administration saw as an unacceptable threat to the U.S. national security.

“Such principles are current, and former President Donald Trump’s administration made that clear,” Sanders argued, recalling that former State Secretary Rex Tillerson acknowledged that the Monroe Doctrine is today as relevant as it was when it was assumed in 1823.

On the 8th of October 2016, the Saudi regime slaughtered 155 civilians in a double-tap strike targeting the Al Kubra hall in #Yemen during a public funeral.

The Russians didn't do it. The Saudis did, supervised by the United States.

6 years on, and no one held accountable. pic.twitter.com/RJgWzuFVw5

“Russia, like the U.S., has an interest in the security policies of its neighbors. Does anyone believe that the United States would not have something to say if, for example, Mexico was to form a military alliance with an American adversary?,” asked Sanders.

“Recognizing the threat that the NATO expansion plays in Russia’s security is not a sign of weakness, but of an understanding,” he added and condemned that President Joe Biden promised to give Ukraine U.S.$500 million worth of military equipment to fight the Russian army.

“This policy, along with the economic sanctions on the Russian entrepreneurs, government, and banks, is sought to defend the U.S. political interests in the Eurasian territory,” the Senator stressed.

The Russian and Ukrainian delegations reached an understanding in their second round of negotiations on humanitarian issues, as well as supporting the idea of continuing negotiations as soon as possible to try to resolve the conflict #Russia #Ukraine pic.twitter.com/X5fkrzZ6mM