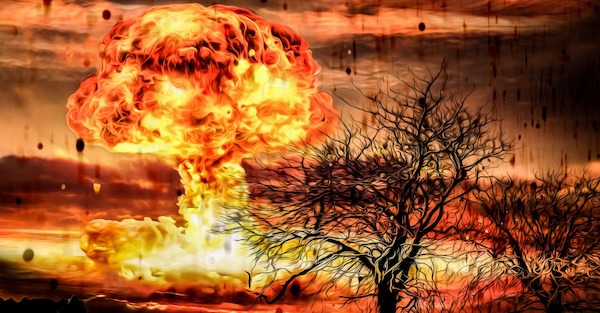 Sometimes I’m not sure what presents a greater threat to humanity, nuclear war or the colossal stupidity that has made it possible.

Due to the skyrocketing risk of a world-ending confrontation between the United States and Russia, World Socialist Website is re-releasing a series of interviews it conducted in 2017 with experts on the subject of nuclear war. One of them is with a senior scientist at Physicians for Social Responsibility named Steven Starr, which WSWS has titled “Nuclear winter—the long-suppressed reality of nuclear war”.

Starr discusses the research which has shown that in addition to the unthinkable horrors of flattened cities and nuclear fallout we’ve all been told about, “a war fought with existing U.S. and Russian nuclear arsenals is predicted to make agriculture impossible for a decade or longer, dooming most people to die from a nuclear famine.”

Starr says a false narrative has been spun that the science behind nuclear winter theory is weak, a narrative I’ve had parroted at me from time to time in my commentary on this subject. He says the science is in fact peer-reviewed and robust, and actually makes very conservative estimates of the environmental havoc that would be unleashed by black carbon soot thrown into the stratosphere by a large nuclear exchange. But this science has been actively suppressed and marginalized by a junk science smear campaign and the slashing of research funding.

"there is no discussion of the existential threat of nuclear war … If we have the best scientists in the world telling us that a nuclear war would wipe out most of the human race, that should be our primary concern"#WW3 #worldwar3 #worldwariii #WWIIIhttps://t.co/A0D5gePl77

“After the success of the smear campaign against nuclear winter, most people eventually accepted this narrative and funding for new research dried up,” Starr said. “This had a big impact on the public, who got the impression that the nuclear winter theory had been disproven. As a result, this issue is hardly ever talked about now in the mainstream media.”

“One of the reasons for this is that over the years, trillions of dollars have been spent on nuclear weapons,” Starr adds. “If the conclusions of the nuclear winter research—that nuclear war is suicide for all peoples and nations—had gained widespread acceptance and understanding, it is likely that the whole nuclear weapons industry would have been shut down.”

But I think another major part of it is the much more basic fact that if people truly understood how dangerous nuclear war is for everyone on this planet, nobody would consent to the kinds of cold war games that the drivers of empire have been intending to play with these weapons.

If people truly understood that their life and the lives of everyone they love are being gambled like poker chips in nuclear brinkmanship maneuvers geared toward securing unipolar planetary hegemony for an undeclared empire loosely centralized around the United States, those few empire architects would soon find themselves on the losing end of a tooth-and-claw fight against the entire human species. The ability to win cold war power struggles is dependent on the mainstream public not thinking too hard about what nuclear war is and why it is being risked.

When I was growing up Americans were proud of fighting Nazis and afraid of a Nuclear War.

Now Americans are proud of arming Nazis and want to risk a Nuclear War.

So I think we’re seeing a broad lack of awareness among the general public of just how close to the precipice we are for the same reason nuclear winter theory has been suppressed: because if everyone deeply understood how dangerous these unipolarist grand chessboard power plays are, and how they deliver no real benefit to ordinary people, they wouldn’t permit them to happen.

A responsible news media would be educating the public about things like nuclear winter, and how easy it would be for a nuclear war to be triggered by a malfunction, miscommunication, misunderstanding, or miscalculation in the chaos and confusion of soaring cold war escalations as nearly happened many times during the last cold war. A “news” media whose job is not to report the news but to manufacture consent for imperial agendas will do everything it can to prevent people from paying attention to those things.

This is why, if you really understand nuclear war and what it means and how close we are to its emergence, it feels so surreal and dissonant looking around at the things people are talking about today. How ungrounded in reality it all is, how unseriously people are taking this thing, how willing they are to consent to things like no-fly zones and other direct military action against Russia. It’s because people are prevented from seeing and understanding this reality. You can’t have the riff raff interfering in the mechanics of the imperial machine. Unipolar hegemony is too important to be left to democratic processes. Keep the local fauna confused and distracted while you roll the dice on nuclear armageddon with the hope of ruling the world.

These people are like mobsters, knowing they’ll probably die a violent death but willing to risk it all for a chance at living the high life. There’s not the slightest iota of wisdom guiding their actions. Just the primitive impulse to dominate and control. They’re living their lives and making their decisions essentially on autopilot, guided by unconscious impulses they themselves don’t understand.

The Single Most Important Question In The World Right Now

"Is what the US and its allies are trying to accomplish in Ukraine worth continually risking nuclear armageddon for?"https://t.co/EJk9ErQ2xj

In the aforementioned interview Starr also touches on the ease with which a nuclear war could be set off by a technical malfunction, and what the earliest moments of a nuclear war will likely look like:

If the US early warning systems detect a missile launch, the President can order a launch of retaliatory nuclear strike before incoming nuclear warheads take out communication systems and weapons. Of course, if this is a false warning of attack, then the “retaliatory” strike becomes a first-strike and a nuclear war has started.

Moreover, if somebody has launched a nuclear strike against the silos in which your nuclear weapons are housed in, you don’t retaliate by targeting their empty silos. You target their cities. Russia only has about 230 cities with a population greater than 100,000 and the US has 312. So it’s not that hard to wipe out a couple hundred cities in an initial salvo.

Starr also discusses the insane belief that Russia will probably back down when threatened with the possibility of nuclear war, a line of thinking that’s becoming so common today that it’s almost its own genre of natsec punditry:

The strategists often say, “Oh, well, Russia will back down.” What if they don’t? And why would they back down on their own border? Any US/NATO-Russian direct military conflict will very likely lead to a full-scale nuclear war.

In another 2017 World Socialist Website interview, this one with Los Alamos Study Group secretary and executive director Greg Mello, we get some more insight into the reality of the nuclear threat:

To a first approximation, in a nuclear war between the US and Russia, everybody in the world would die. Some people in the southern hemisphere might survive, but probably not even them.

The imagination cannot encompass nuclear war. Nuclear war means nuclear winter. It means the collapse of very fragile electronic, financial, governmental, administrative systems that keep everyone alive. We’d be lucky to reboot in the early 19th century. And if enough weapons are detonated, the collapse of the Earth’s ozone layer would mean that every form of life that has eyes could be blinded. The combined effects of a US-Russian nuclear war would mean that pretty much every terrestrial mammal, and many plants, would become extinct. There would be a dramatic biological thinning.

The gulf between these expert analyses and what people are consuming in the news could not possibly be wider. People simply don’t understand what’s being done with their lives by powerful people who care only about imperial domination, and the powerful intend to keep it that way.

It doesn’t need to be like this. There’s no reason our planet needs to be dominated by any one single power structure, especially if doing so means risking complete annihilation. We should all be pushing for de-escalation, diplomacy and detente, and for the nations and peoples of this world to begin working together for the good of everyone.