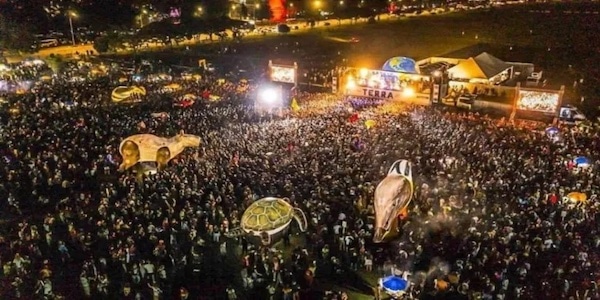 Protest for the earth in Brazilia, (Photo: Mídia Ninja)

The Brazilian government remains firm in its objective of handing over indigenous lands, which make up 12% of Brazilian territory, to private hands, preferably agribusiness and mining. In other words: it is not enough to steal, it has to destroy. Since he took office, Jair Bolsonaro has accumulated a long history of attacks on indigenous peoples with the argument that they do not offer any benefit to society, so they have to be “integrated” to become workers. With that logic, the government dismantled the Funai (the body that should protect the indigenous people) and has turned a blind eye to all the attacks by grileiros (landowners thanks to false documents), jagunços (gunmen) and fazendeiros (landowners) on indigenous lands. Clandestine mining continues at full steam, in fact, it should not be called clandestine, since it is done shamelessly, in broad daylight. The number of attacks on communities is increasing, as are the records of murders and violence of all kinds against indigenous people, without any policy to stop them.

The presence of neo-Pentecostal churches in the villages and communities has been the government’s greatest asset in the process of desegregation of the indigenous peoples, since with “evangelization” the populations are abandoning their culture and beliefs. In many communities, sacred songs are no longer sung and healing practices are falling into oblivion. Last week, in Mato Grosso do Sul, in a Guarani village, a woman was kidnapped and accused by the community chief, Antônio, of sorcery. The scenes, recorded on video, show the man offending, accusing, cutting the woman’s hair and threatening to set her on fire, which he would have done if a group of people had not arrived to rescue the healer. A dramatic moment in our recent history that shows the bad treatment that these churches, loaded with intolerance, dispense to indigenous peoples.

However, the president is not alone in this exterminating task. The 513-member Chamber of Deputies is overwhelmingly in favor of carrying out this mission of annihilation of indigenous life. On March 9, 2022, for example, the Chamber approved, as a matter of urgency, PL 191, as proposed by the executive, which regulates mining on indigenous lands, including where isolated peoples live, without the native communities having the right to veto. With the urgency, the bill will not pass through commissions nor will it be debated, so it will be immediately taken to the plenary.

At the same time that a gigantic rally for the Earth and against the LP was being held in front of the National Congress, in the Three Powers Square, gathering indigenous people, social movements and artists, the proposal was approved without major surprises, with 279 votes in favor, 108 against and three abstentions. Only the Workers’ Party (PT) and the Party of Socialism and Liberty (PSOL) voted against the urgency. Other parties, such as PDT and Novo, divided, gave votes to the government.

The argument for the urgency could not be more hypocritical. The president says that now, with the war in Ukraine, Brazil needs to depend less on potassium imports, hence the need to allow potassium mining on indigenous lands. Yes, that is the argument. And it was uncritically accepted by 279 deputies. Now, the PL must be voted before April 14 and, considering the profile of the legislature, it will probably be approved.

The mobilization against PL 191, which brought thousands of people to Brasilia to participate in the “Act for the Earth against the Package of Destruction”, was peaceful and calm, but failed to touch the hearts of the deputies. This was nothing new, since it is not that–the heart–that moves them. It is the financial interests of the groups that elected them that determine the direction of their votes. And, in the National Congress, there is only one indigenous woman, out of a total of 513 members.

Deputy Joenia Wapichana spoke in plenary saying that the bill in question represents Bolsonaro’s dream, which is none other than the complete destruction of Brazil’s indigenous peoples. She also recalled that the communities are organized and will fight. This process is going to be developed with the opposition of the indigenous movement, as it has been doing since the first day of Jair Bolsonaro’s government, when one of his first measures was to transfer the Funai from the Ministry of Justice to the Ministry of Agriculture. Indigenous peoples have risen up in protest since that day and since that moment have held numerous marches, events and demonstrations, both in Brazil and abroad, asking for help from society to act in conjunction with the indigenous movement in defense of the communities that most protect biodiversity and forests. In a country as large as Brazil, it will not be the 12% of the territory in indigenous hands that will impoverish the nation, even if they are not engaged in producing soybeans or minerals. What research shows is that it is precisely that 12% of land in indigenous hands that has guaranteed the protection of nature, so necessary to avoid apparently “natural” tragedies.

Now, with the urgent processing of the approved bill, the indigenous peoples will have less than a month for new mobilizations. In this sense, coordination between non-indigenous entities, unions and social movements is more than necessary in this battle against mining on indigenous lands. Not in vain, mining not only destroys the place where it opens its quarries and wells, mining also destroys rivers, fauna and people. It may seem that mining is far away from the vast majority of us, but it is not. It is precisely this systematic destruction of the ecosystems of indigenous lands that causes so many disasters in the cities and in the countryside, such as floods and flooding of rivers, droughts and storms, so out of time. The rule is clear: do not touch the wing of a butterfly without shaking the entire planet.