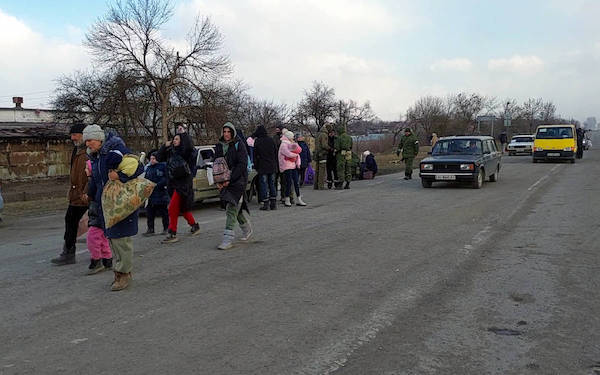 On March 18, 2022, we went to the western part of Marioupol where the fighting between the Russian army, the DPR (Donetsk People’s Republic) people’s militia and the neo-Nazi Azov regiment is still raging. We were able to see many civilians finally evacuating Marioupol after several terrible weeks of hiding in cellars, and we asked them how the cohabitation with the Azov fighters went.

When we arrived, the part of the city already under the control of the Russian army and the DPR people’s militia was in ruins after the fierce fighting there. The buildings are badly damaged, and there are bodies lying in the streets, because nobody took the risk of burying them under the firefight. The area we visited is only a few meters from where the fighting is still going on, and gunfire can be heard regularly.

Thanks to the arrival of Russian and DPR soldiers, civilians can finally flee Marioupol, and we pass a long column of cars and people fleeing the city on foot, some with children, others with their pets. Russia has made buses available to evacuate civilians who do not have cars, and they fill up quickly.

In one day no less than 13,751 civilians were evacuated from Mariupol, bringing the total number of evacuated residents to 56,743 since the opening of the humanitarian corridors.

In order to save as many civilians as possible, Russia offered the neo-Nazis of the Azov regiment to let them leave Mariupol via secure corridors, so that they would stop using the inhabitants as human shields to delay as long as possible the moment when they would be liquidated. But Ukraine refused this proposal, showing that Kiev does not care about the lives of civilians.

Some of these “brave” neo-Nazis from Azov, having understood that they were finished, exchanged their uniforms for civilian clothes and fled the city via the humanitarian corridors set up by Russia, despite the checks carried out at the checkpoints (the soldiers check, among other things, the presence of tattoos on the men’s bodies). Moscow estimates that between 150 and 200 of them left Mariupol in the direction of Zaporozhie, in groups of 10 to 15 people. But the Russian army spotted them and eliminated 93 of them during the night.

In talking to civilians still in Marioupol, and those fleeing the city, we have had confirmation that the neo-Nazi fighters of the Azov Regiment are using the residents as human shields, preventing them from leaving the city, and setting up their military equipment and firing positions near bomb shelters, and even in homes, thus causing their destruction when the Russian army or the DPR People’s Militia fires back. A civilian who evacuated the day before revealed to several journalists that it was the Azov regiment that destroyed the dramatic Mariupol theater during its retreat, not the Russian army.

Many residents ask us to broadcast their appeal for their relatives in Odessa, or in Russia, so that they have a chance to know that they are okay. Many did not know that buses were provided by Russia, and got the information from us. Others, who refuse to evacuate Mariupol, have robbed the warehouse of a large store, in order to get food and especially water, because the inhabitants have been in the cellars for almost three weeks without the fighters of the Azov regiment having given them anything to hold on to.

Ukrainian fighters are now shelling the areas of Marioupol that are under Russian and DPR control, injuring 15 civilians who are still there, including a baby.

See the report filmed on the spot, as well as the interview of a civilian who evacuated Marioupol the day before, all subtitled in French:

While fighting continues in Mariupol (Chechen soldiers are eliminating the Azov neo-Nazis entrenched in the Azovstal factory), the DPR people’s militia has broken through the Ukrainian army’s defenses in Maryinka and is advancing into the locality. The localities of Taramchuk and Ugledar are now under DPR control.