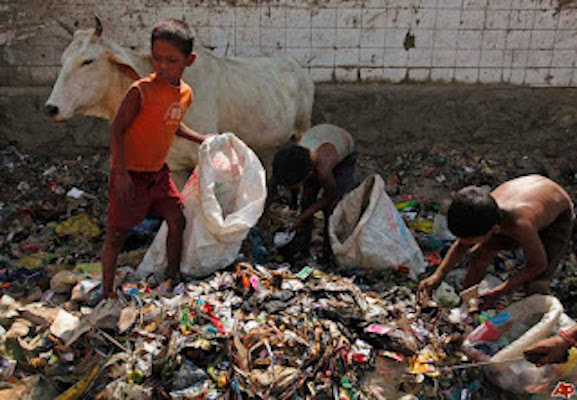 THE relocation of capital from the advanced capitalist countries of the north to low-wage countries of the south in the current era of globalisation has received much attention; but there is another kind of relocation that has not received as much attention, and that is of labour from comparatively lower-wage countries of Eastern Europe to the advanced capitalist countries. In fact since within the European Union there is generally free mobility of labour, this has become a powerful inducement for these Eastern European countries to join the European Union. Some of these countries have started displaying certain classic symptoms of labour-exporting economies: declining absolute populations; a shift in the composition of the population from able-bodied males of working age, to women, children and older people; and a change in the character of the economy from being productive to being remittance-receiving. The collapse of the Soviet Union has been followed by a tendency towards depopulation of the countries that constituted its western segment.

This decline is not confined only to former Soviet republics; it afflicts countries that constituted former Yugoslavia as well. Since the collapse of Yugoslavia, Bosnia and Herzegovina has lost 24 per cent of its population, Serbia 9 per cent and Croatia 15 per cent. Such declines also characterise Albania and Moldova. In fact the top 10 countries in terms of population decline are all from central and eastern Europe; and seven of these 10 countries have been inducted into the European Union. The most important reason for the decline in population obviously is migration to the west.

If “mainstream” bourgeois economics recognised that relocation of capital and labour  occurred under capitalism, then it would be forced to explain the trade in products in some other way (not as a proxy for the relocation of capital and labour); and this other way inter alia would be trade on the basis of what was geographically possible to grow in particular regions. This would mean that regions that are unwilling to trade though they grow commodities which the other region badly needs would have to be “opened up” for trade. It would entail in short facing the phenomenon of imperialism. It is this which is prevented by the apologetic trade theory of “mainstream” bourgeois economics.

Britain for instance was the country that pioneered the industrial revolution, starting with the cotton textiles industry; but Britain cannot grow any raw cotton, because of which the industrially pioneering country would need control over distant tropical and semi-tropical lands that can produce raw cotton and get them to supply the quantities it needs. Thus, once we move away from the fairy-tale of trade occurring in accordance with “factor endowments” in a situation where the factor endowments themselves were supposedly frozen and could not migrate across country-borders, then “imperialism” becomes impossible to ignore. “Mainstream” bourgeois economics does precisely this: it ignores imperialism and explains trade as the result of capital and labour not being traded or relocated.

Since western Europe itself has been afflicted by high unemployment rates, the phenomenon of immigration into it from its lower-wage eastern neighbours may appear intriguing at first sight. But migration does not occur only into regions and countries that are experiencing labour shortages; in a world characterised by unemployment everywhere there would still be migration from low wage to high wage regions for two reasons: one, the motive for migration is provided by the expected income one can earn compared to one’s current income, which already takes into account the possibility of unemployment; and, two, the migrants are usually willing to work at somewhat lower wages (or worse conditions of work) than the local population, so that their prospects of employment tend to be better than those of the local population. This explains the paradox that even a crisis-afflicted western Europe can draw immigrants from eastern Europe which has been witnessing virtual stagnation since the collapse of socialism.

The twin phenomena associated with contemporary globalisation, of migration of capital from the metropolis to parts of the third world, and of migration of labour from the erstwhile second world to the metropolis, have the effect of weakening the working class movement everywhere. These phenomena weaken it in the metropolis; they also weaken it where capital migrates (for otherwise it would choose a different destination). They also weaken the position of the migrant workers, whose employment prospects depend precisely on their not being organised. At the world level there is thus a shift in the balance of class power from the working class to the capitalists.

This however only accentuates the crisis faced by capitalism. The net result of the relocation of capital and labour is to raise the share of surplus in world output, which reduces aggregate demand, since a higher proportion of the working people’s income is spent on consumption than of the economic surplus. The irony of contemporary capitalism is that the fanatical quest for lower labour costs has brought the system to the impasse of a protracted crisis.