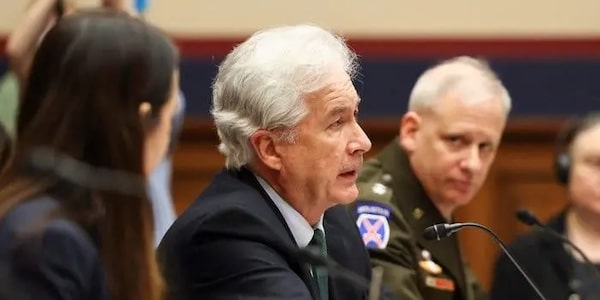 CIA Director Bill Burns testified before the Senate Intelligence committee in early March that Russia and Vladimir Putin were “losing the information war over its war in Ukraine.”

In all my years I spent as a career diplomat, I saw too many instances where we lost information wars with the Russians,” Burns said, but “this is one information war that I think Putin is losing…. In this case, I think we have had a great deal of effect in disrupting their tactics and calculations and demonstrating to the entire world that this is premeditated and unprovoked aggression built on a body of lies and false narratives.

George Orwell must be rolling over in his grave with Burns’ performance. While hypocritically excoriating Russia for promoting a “body of lies” and “false narratives,” Burns admitted to using the very same tactics in an information war in which both sides were twisting the truth.

The U.S. Big Lie centers on the claim of unprovoked Russian aggression.

As CAM has previously reported, the war was actually started by Ukraine eight years ago when it sent troops into Eastern Ukraine in an attempt to subdue pro-Russian secessionists who resisted a February 2014 U.S. backed coup d’état.

Prior to the Russian invasion of Ukraine on February 24, Organization For Security and Cooperation in Europe (OSCE) maps showed that shelings that violated ceasefire arrangements under the Minsk accords were carried out mostly by the Ukrainian government, which had forced the people of Luhansk and Donetsk to live in underground bunkers for years. 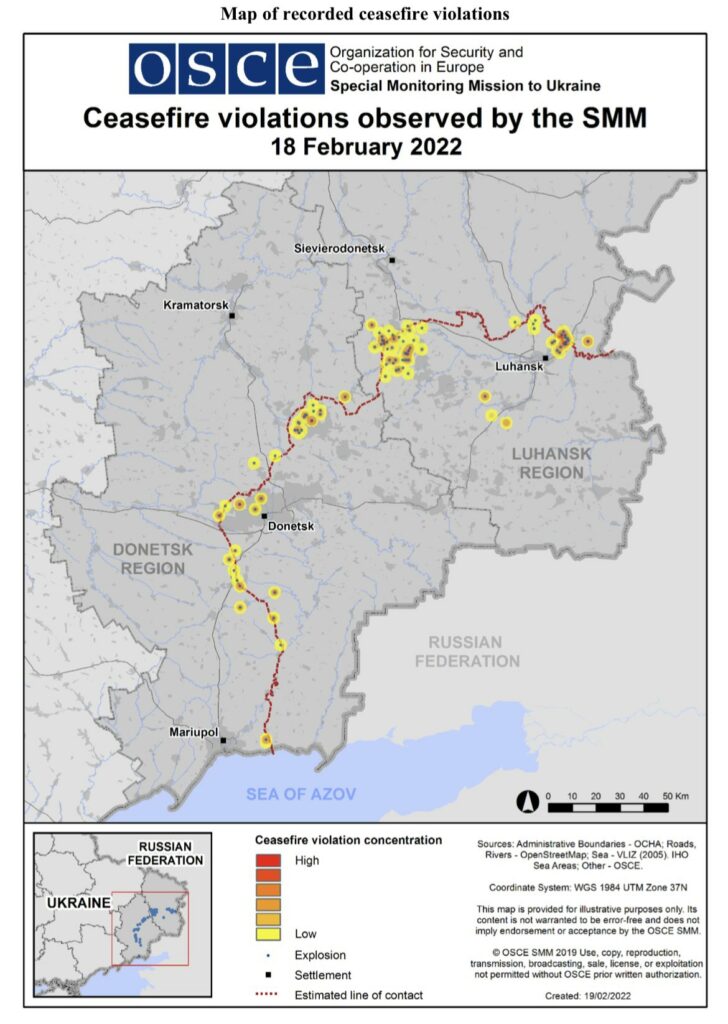 According to the Russian Deputy Foreign Minister, Ukraine had massed 122,000 troops on the border with Donbass on the eve of the war. The Duma claimed to have intelligence indicating that these troops were planning an offensive into Donbass, which the Russian invasion preempted.

Russia reported on February 21 that it had captured a Ukrainian soldier and killed five others after they crossed into Russian territory in Rostov, just over the border with Ukraine. 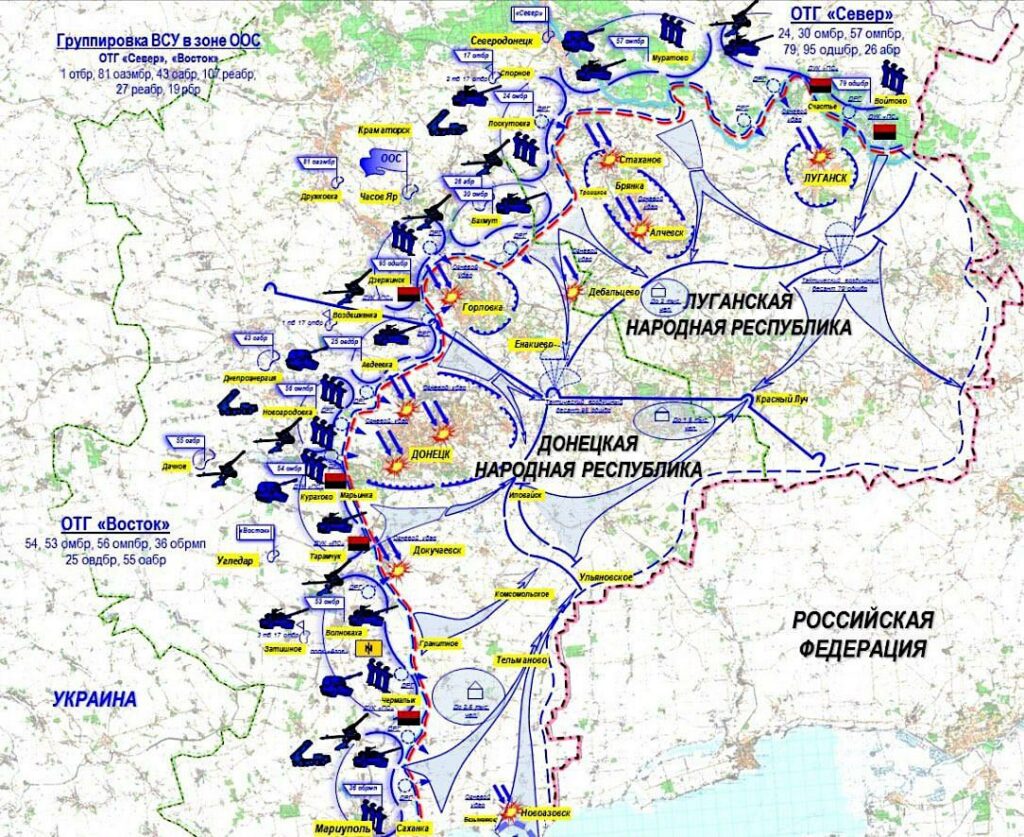 Map showing Ukrainian troops concentrations on the eve of the Russian invasion on February 24, 2022. [Source: covertactionmagazine.com

The U.S. further provoked the war by refusing to abide by Putin’s legitimate demand that the North Atlantic Treaty Organization (NATO) not be expanded to Ukraine or anywhere further to Russia’s border—going against a promise made in 1990 by U.S. Secretary of State James A. Baker that NATO would not expand “one inch eastward.” 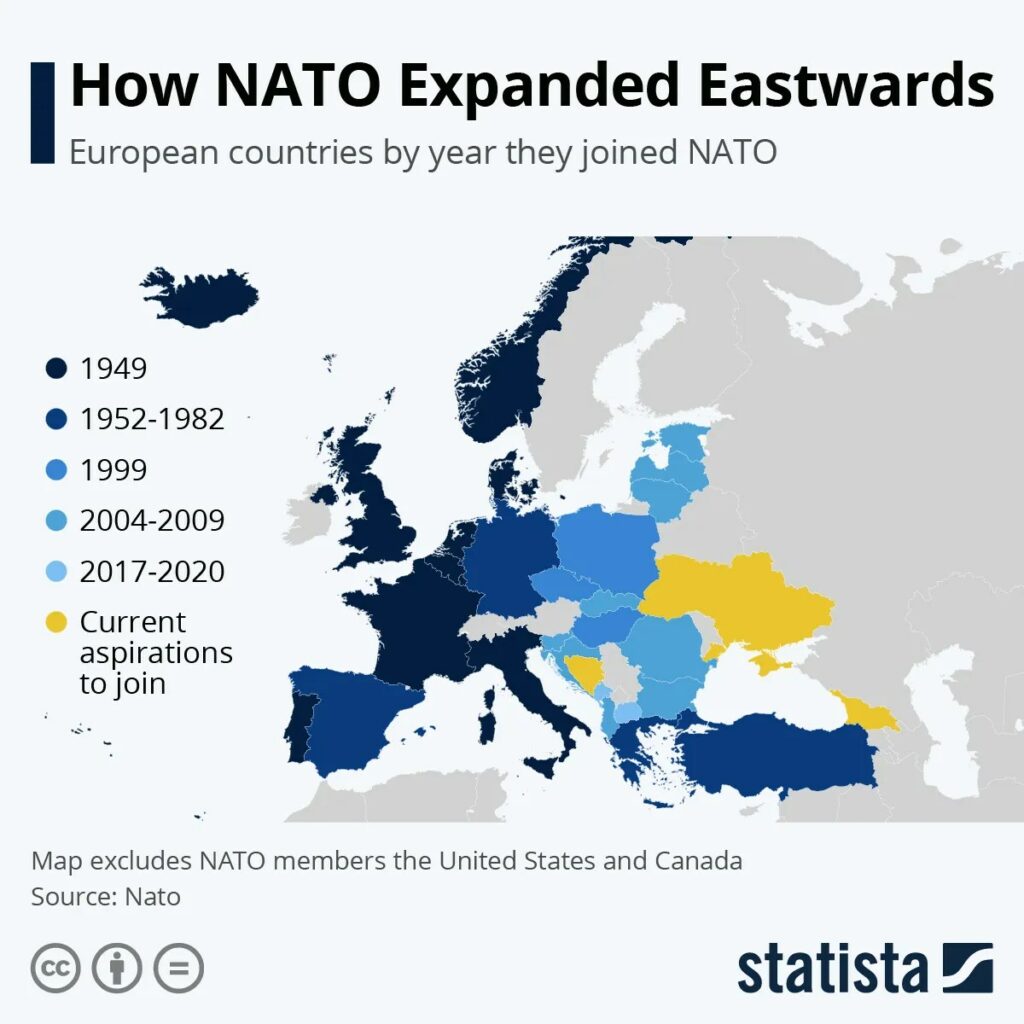 The U.S. also armed and equipped the Ukrainian military with lethal weaponry for years, including Javelin anti-tank missiles, which have shot down at least 50 tanks in the war so far, and CIA trained Ukrainian paramilitary units in sniper techniques and irregular warfare. 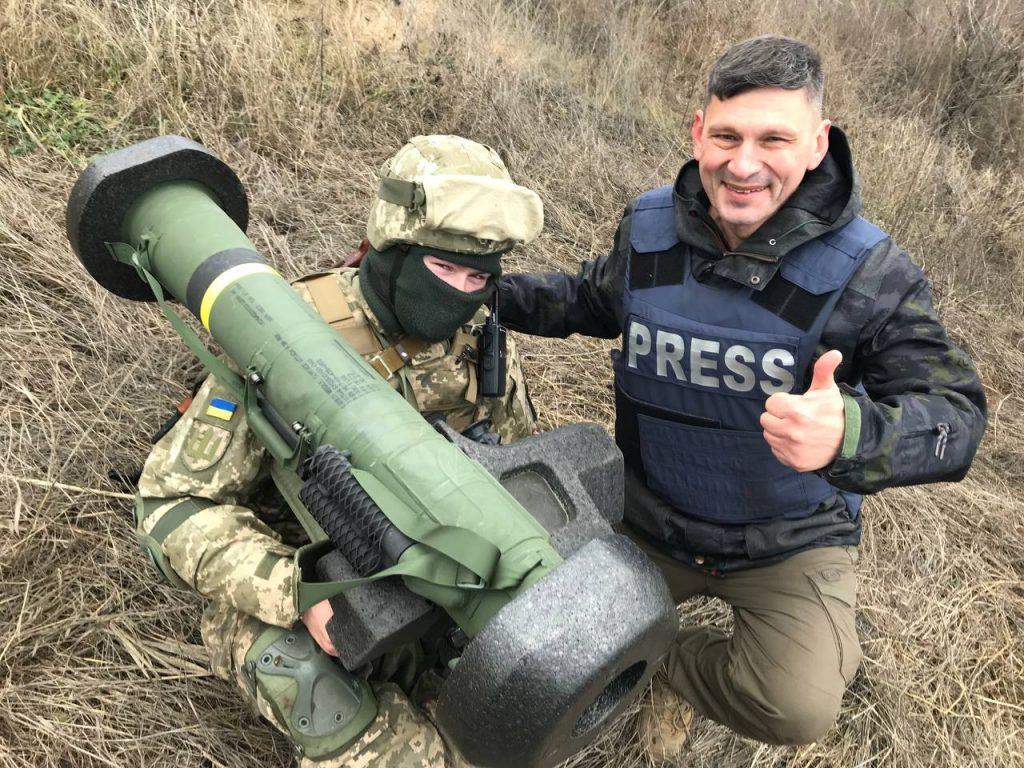 At the heart of the current information war lies allegations about wide scale atrocities, false flag attacks and chemical warfare.

Russia has also accused the U.S. of possessing biowarfare labs within Ukraine. Press Secretary Jen Psaki claimed that the latter allegation was part of a Russian disinformation operation. However, undersecretary of state Victoria Nuland admitted that bioweapons labs existed in Ukraine and that she was afraid that Russian troops would seek to gain control of them, with leaked documents showing that Pentagon contractors had access to the labs. 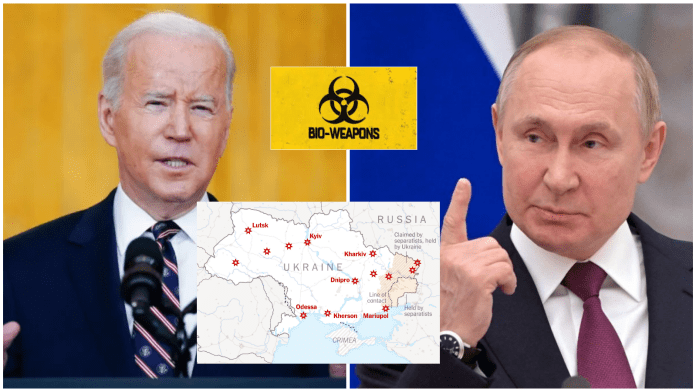 On March 13th, Russia was accused of bombing a maternity ward in Mariupol, killing a pregnant woman and her baby. Russian officials claimed the maternity hospital had been taken over by Ukrainian extremists to use as a base, and that no patients or medics were left inside. Russia’s ambassador to the U.N. and the Russian Embassy in London called the images “fake news,” which appears in this case to be untrue. 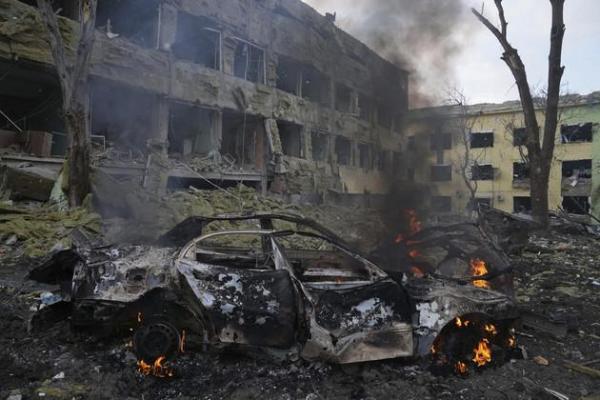 Car burns next to maternity ward in Mariupol that was destroyed by a Russian bomb. Source: politico.com.

However, the Western media made the Russians look like the only bad guys in the war by failing to report on Ukrainian atrocities such as Ukraine’s deployment of a cluster bomb in the Donetsk city center, killing dozens of civilians (including six people riding a city bus) and forcing many more to evacuate.

See Patrick Lancaster’s horrific Report below on the Ukrainian government atrocities levied against civilians in the town center of Donetsk. (viewer discretion advised):

The U.S. media also failed to report on how Azov battalion men dragged civilians who were trying to leave Mariupol from their cars and then shot them dead, as was captured on video. Russia was further blamed for bombing a movie theater in Mariupol where residents had taken shelter, when eyewitness reports said it was the work again of Azov militants associated with the Ukrainian army. 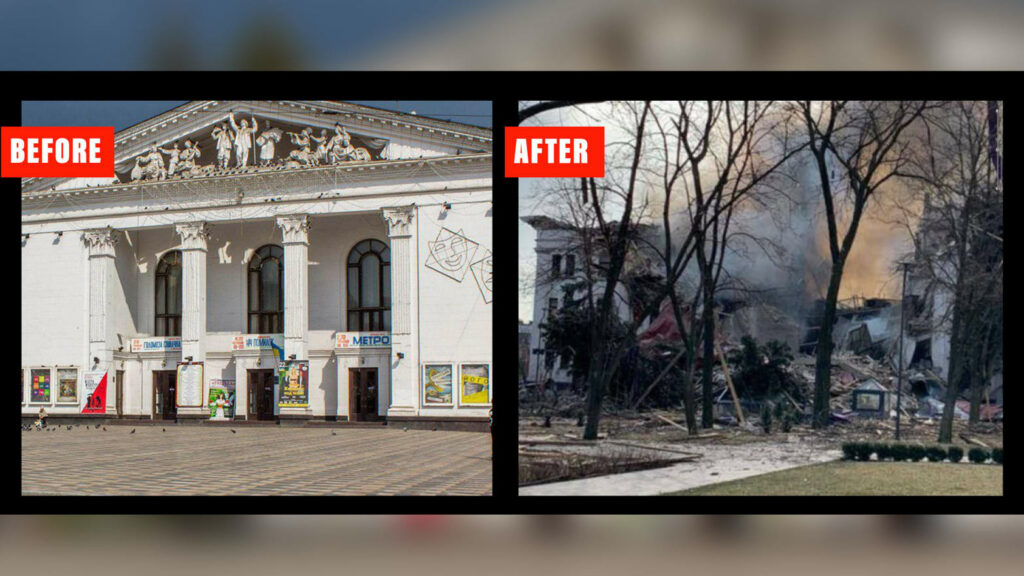 CNN and other U.S. media blamed Russia for destroying the movie theater in Mariupol when eyewitness said it was Azov militants within the Ukrainian army. Source: thedailybeast.com.

The extent to which the CIA is behind the media’s one-sided coverage of the Ukraine war is uncertain. In the past, the CIA has planted journalists and funded intellectual journals and continued to do so under the guise of the National Endowment for Democracy (NED).

Burns’ statements indicate, however, that the nation’s media have been enlisted in the information war unequivocally. RT News has been shut down and mainstream publications like the New York Times parrot the State Departments’ views about the war, attributing any criticisms of U.S. policy to Russian disinformation.

Last week, the White House went so far as to invite and brief some 30 top social media “influencers,” especially those on TikTok, a short video platform which has become very popular among the youth. Using similar material provided to mainstream news reporters, this clearly represents an extra effort by Washington to more widely propagate disinformation on Ukraine.

In his 1928 book, Falsehoods in a Time War, Sir Arthur Ponsonby provided a blueprint of war propaganda that could be summarized as follows: