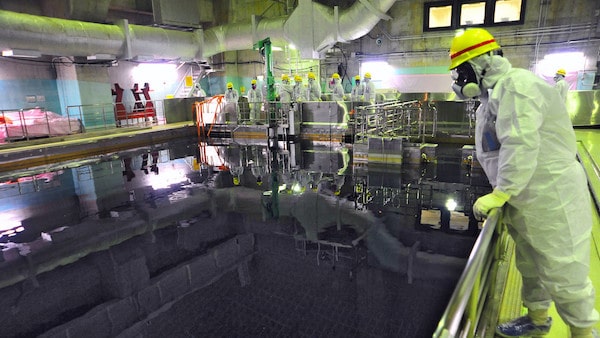 In the midst of the arcane fight over whether to include nuclear power in the European Union’s green “Taxonomy”, five former prime ministers of Japan made an unprecedented statement. They roundly condemned any inclusion of nuclear power as a green or sustainable energy, even as a so-called bridging fuel.

The current Japanese government glossed over the climate arguments in the former prime ministers’ argument, quickly seizing upon one tiny phrase concerning conditions in Japan post-Fukushima that read: “many children are suffering from thyroid cancer”.

The ruling Liberal Democratic Party even went so far as to approve a resolution condemning the five former prime ministers, one of whom, Junichiro Koizumi, is from that party. The resolution alleges that their statement was not “scientific” and that they were reigniting prejudice and encouraging people to view people from Fukushima as social outcasts.

The party’s Policy Research Board said it would submit its resolution to current prime minister, Fumio Kishida.

On the same day—January 27, 2022—as the former prime ministers’ letter was submitted to the EU, six young people who were children at time of the March 2011 Fukushima Daiichi nuclear disaster, filed a lawsuit in the Tokyo District Court against TEPCO, the owner and operator of the nuclear plant.

The six, ages 17 to 27, hold the company responsible for the thyroid cancers each of them developed after being exposed to the radiation released by the nuclear disaster.

In filing suit and thus making the issue public, the six were immediately on the receiving end of an unprecedented level of abuse for speaking out. In this video of their testimony, they were obliged to keep their physical appearances concealed for fear of further reprisals.

“Coming out” on thyroid cancer—or indeed about any negative health impacts resulting from the Fukushima nuclear disaster—remains largely taboo in Japan.  Studies that conclude the medical impacts are significant or even substantial, are met with equal hostility, stoniness or just plain silence.

When epidemiologist, Toshihide Tsuda and colleagues, published a paper in 2016—Thyroid Cancer Detection by Ultrasound Among Residents Ages 18 Years and Younger in Fukushima, Japan: 2011 to 2014—it was reportedly largely ignored rather than challenged.

The study concluded: “An excess of thyroid cancer has been detected by ultrasound among children and adolescents in Fukushima Prefecture within 4 years of the release, and is unlikely to be explained by a screening surge.”

This contradicted the prevailing and enduring view among the establishment that there are now more thyroid cancers found among children after Fukushima simply because there is more testing.

The “more testing” myth served as a convenient pretext to reduce testing for thyroid cancers in schools—on the basis such testing would upset children too much, hardly “scientific”.

The very public lawsuit may transform all this, as the testimonies leave an indelible picture of the toll taken on children and families by the Fukushima nuclear disaster.

In a two-part series, investigative journalist, Natsuko Katayama, reported on the case for the Tokyo Shimbun on January 19 and January 27 this year.

She wrote that among the plaintiffs,

Two of them had a lobe of the thyroid removed, and the other four had to have the whole thyroid removed because of recurrence (in the case of one of them, metastasis had spread to the lungs). All of them had to stop their studies or their professional activity in order to undergo these surgical procedures and medical treatments. They live in fear and anxiety of a recurrence, and their daily lives have been curtailed due to fatigue and weakness caused by the disease.

One of the plaintiffs said they had all kept silent about their thyroid cancers for 10 years, not daring to go public because of the inevitable backlash of discrimination.

Many of those suffering illnesses related to the Fukushima nuclear disaster find themselves the new “Hibakusha”, the name originally given to those ostracized and rejected by Japanese society because of their exposure to radiation from the Hiroshima and Nagasaki atomic bombings.

Choking with emotion, one of the plaintiffs described in the press conference how she and the others had to give up their work and educational hopes and dreams due to the constrictions of illness and the necessary treatments. “Four of the six plaintiffs have had a recurrence or mestatasis of their disease,” she said.

Thyroid cancers among those exposed to Fukushima radiation as children have increased 20 times the expected rate, with about 80% metastasizing, meaning surgery was medically indicated and screening necessary.

“I am very worried about the future and cannot think about marriage or other plans,” said one of the young women, also a plaintiff in the trial, whose voice could be heard at the press conference, and whose cancer had returned and spread. All of them have faced considerable financial hardships due to the expense of their treatment and the loss of work.

The plaintiffs expressed the hope that the trial would help other children suffering from thyroid cancer, believed to number at least 300. But, with the suppression of testing and reporting, and the taboo surrounding any admission of thyroid cancer, the numbers could well be a lot higher.

The plaintiffs’ lawyers argue that Tepco will need to prove that there is no causal relationship between their clients’ thyroid cancer and the Fukushima Daiichi nuclear disaster. It seeks compensation for the victims.

“I try to believe that all will be well,” said one of the plaintiffs, a 26-year old woman who was 17 at the time her thyroid cancer was diagnosed, “even as I ask myself, ‘why me’?”

The 3.11 Children’s Thyroid Cancer Network was launched to support this lawsuit.