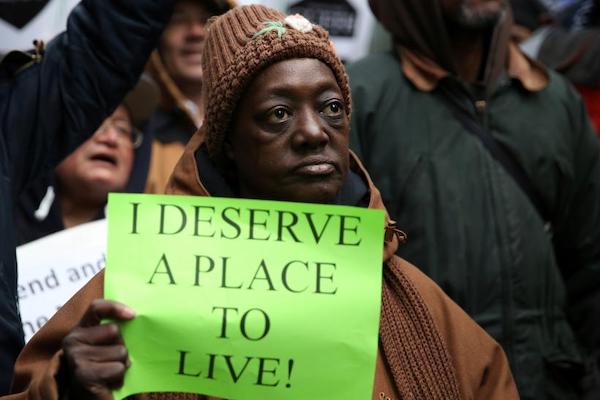 The U.S. justifies wars of aggression in the name of human rights. The term has no meaning domestically either, as the people’s needs are subordinated to those of the ruling class.

Images of burnt flesh from napalm bombs, wounded and dead soldiers, scenes of U.S. soldiers burning the simple huts of Vietnamese villages, eventually turned the public against the war in Vietnam and produced the dreaded affliction, from the ruling class point of view, known as the “Vietnam syndrome.” This collective Post Traumatic Stress Disorder made it impossible for the public to support any foreign military involvement for years.

It took the rulers almost three decades to finally cure the public of this affliction. But the rulers were careful.

The brutal reality of what the U.S. was doing in Afghanistan and Iraq was whitewashed. That is why the images now being brought to the public by the corporate media are so shocking. It has been more than two generations since the U.S. public was exposed to the horrific images of war.

In the 1960s the rulers inadvertently allowed themselves to be undermined by the new television technology that brought the awful reality of imperialist war into the homes of the public. Now, the ruling class operating through its corporate media propaganda arms has been effectively using Ukraine war propaganda, not to increase Anti-war sentiment but to stimulate support for more war!

Incredibly also, the propagandists are pushing a line that essentially says that in the name of “freedom” and supporting Ukraine, the U.S. public should shoulder the sacrifice of higher fuel and food prices. This is on top of the inflation that workers and consumers were already being subjected to coming out of the capitalist covid scandal that devastated millions of workers and the lower stratums of the petit bourgeoisie.

But the war, and now the unfair shouldering of all of the costs of the capitalist crisis of 2008 – 2009, and the impact of covid by the working classes in the U.S., amounts to a capitalist tax. It is levied by the oligarchy on workers to subsidize the defense of the interests of big capital and the conditions that have produced obscene profits, even in the midst of the covid crisis and now, the Ukraine war.

These policies are criminal. While the U.S. continues to pretend that it champions human rights around the world, the failure of the state to protect the fundamental human rights of the citizens and residents in the U.S. is obvious to all, but spoken about by the few, except the Chinese government.

For those who might think that the Chinese criticism of the U.S. is only being driven by politics, and it might be, just a cursory, objective examination of the U.S. state policies over just the last few years reveals a shocking record of systematic human rights abuses that promise to become even more acute as a consequence of the manufactured U.S./NATO war in Ukraine.

The U.S. working class, and Black working class in particular, never recovered from the economic crisis of 2008 before it was once again ravaged in 2020 with the global capitalist crisis exacerbated by covid. On the heels of those two shocks, today millions of workers are experiencing a permanent state of precarity with evictions, the continued loss of medical coverage, unaffordable housing and food costs, and a capitalist-initiated inflation. The rulers are operating under the belief that with the daily bombardment of war images, U.S. workers and the poor will embrace rising costs of gas and even more increases in the cost of food.

Doesn’t the state have any responsibility to ensure that the economic human rights of the people are fulfilled? No, because liberal human rights practice separates fundamental human rights – such as the right to health, food, housing, education, a means to subsist at an acceptable level of material culture, leisure, and life-long social security – from democratic discourse on what constitutes the human rights responsibility of the state and the interests it must uphold in order to be legitimate.

The non-recognition of the indivisibility of human rights that values economic human rights to an equal level as civil and political rights, exposed the moral and political contradictions of the liberal human rights framework. The massive economic displacements with hunger, unemployment, and unnecessary deaths among the population in the United States, with a disproportionate rate of sickness and hospitalization among non-white workers and the poor in the U.S., were never condemned as violations of human rights.

The war being waged against global humanity by the U.S./EU/NATO Axis of Domination is a hybrid war that utilizes all the tools it has at its disposal–sanctions, mass incarceration, coups, drugs, disinformation, culture, subversion, murder, and direct military engagement to further white power. The Eurocentrism and “White Lives Matters More Movement” represented by the coverage of the war in Ukraine stripped away any pretense to the supposed liberal commitment to global humanity. The white-washing of the danger of the ultra-right and neo-Nazi elements in the Ukrainian military and state and the white ethno-nationalism that the conflict generated across the Western world demonstrated, once again, how “racialism” and the commitment to the fiction of white supremacy continues to trump class and class struggle and the ability to build a multi-national, class based anti-capitalist, anti-imperialist opposition in the North.

It is primarily workers from Russia, the Donbas and Ukraine who are dying. But as in the run-up to the first imperialist war in Europe, known as World War One, workers with the encouragement of their national bourgeoisies, are lining up behind their rulers to support the capitalist redivision taking place, a redivision that can only be completed by war as long as capitalism and capitalist competition continues. Yet, instead of “progressives and radicals” joining forces to resist the mobilization to war, they are finding creative ways to align themselves with the interests of their ruling classes in support of the colonial/capitalist project.

In the meantime, the people of Afghanistan are starving, with thousands of babies now dying of malnutrition because the U.S. stole their nation’s assets. Estimates suggest that unless reversed, more people there will die from U.S./EU imposed sanctions than died during the twenty year long war. And the impact of the war in Ukraine with the loss of wheat exports from Ukraine and Russia resulting not only in rising food prices globally but in some places like East Africa, resulting in death from famine.

In the U.S. where we witness the most abysmal record of covid failure on the planet, the virus will continue to ravage the population, with a disproportionate number who get sick and die being the poorest and those furthest from whiteness.

The lackeys of capital playing the role of democratic representatives claim that there is no money to bring a modicum of relief to workers represented in the mildly reformist package known as Build Back Better. Yet, the Brown University Costs of War Project estimates that the wars waged by the United States in this century have cost $8 trillion and counting, with another $8 trillion that will be spent over the next ten years on the military budget if costs remain constant from the $778 billion just allocated.

No rational human being desires war and conflict. The horrors of war that the public are finally being exposed to because it was brought to Europe again, the most violent continent on the planet, should call into question all of the brutal and unjustified wars that the U.S. and its flunkey allies waged throughout the global South over the last seventy years. Unfortunately, because of the hierarchy of the value of human beings, the images of war in Ukraine are not translating into a rejection of war, but instead a rejection of war in Europe and on white Europeans.

This means that the wars will continue and we must fight, often alone, because as Bob Marley said in his song “War”:

Which hold one race superior and another