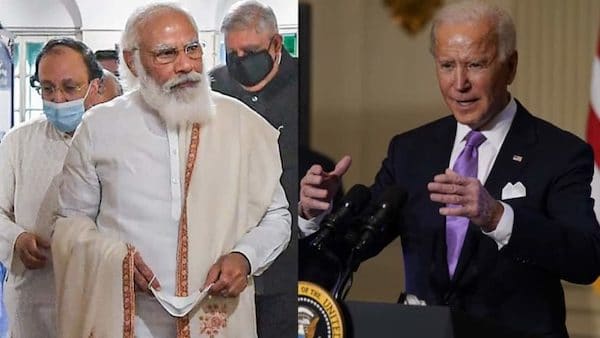 An extraordinary week has passed for the Modi government’s dalliance with the Quad. Call it a defining moment, a turning point or even an inflection point—it has elements of all three.

Biden has since taken a jab that India has a “somewhat shaky” stance on Ukraine. Who would have imagined that the geopolitics of Ukraine was going to shake up Quad?

Certainly, India had a premonition. The Indian foreign-policy establishment has had no misconceptions about what began unfolding in Ukraine in the last week of February. It had spotted as far back as November/December at least, like Elijah in the Bible, a small cloud like the palm of a hand coming up from the sea.

Unlike the Indian media, academia or think tanks at large, the Indian leadership could sense that an epochal global struggle for ascendancy by the U.S. and its western allies versus Russia and China was breaking out in Ukraine. Modi sensed that there would be collateral damage to India unless it saddled up to get down from the mountain, as the sky began grew black with wind-driven clouds, before the huge cloudburst of rain arrived.

There is a background to it. Any preceptive observer would have noticed that Modi has been in a reflective mood as regards foreign affairs for the past several months. His participation in the Summit for Democracy last December discernibly had a fin-de-siècle air about it–the closing of one era and onset of another. One could attribute it to the sobering effect of the pandemic.

The point is, India struggled with the pandemic all by itself. No matter the hype about it, India realised that it has no real partnership with the U.S. or EU, that it was a mere transactional relationship–and that in the final analysis, India lived in its region.

Indeed, India handled the pandemic far better than most countries. International experts acknowledge it today, and those who threw stones at that time grudgingly accept it, too.

However, with the economy ravaged beyond recognition, the government is picking up the pieces and staggering forward. There is still so much of uncertainty in the air about yet another “wave” of the pandemic stealthily advancing to drown all ceremonies of repair and reconstruction of life.

Succinctly put, the big-power struggle in faraway Europe, precipitated by the Biden administration for geopolitical purposes to isolate and weaken Russia, erupted at a most critical juncture when India has been increasingly sceptical about American policies and statesmanship. The picture that the U.S. is presenting itself is far from convincing either: a battleground of tribalism and culture wars, an ageing superpower in decline with dwindling influence globally.

In the Indian economy’s tryst with destiny, the U.S. is of no help. On the other hand, the waning multilateralism and the new constraints imposed on growth by the U.S.’ growing propensity to weaponise the dollar, threaten to blight the shoots of post-pandemic growth in the Indian economy.

On Monday, Biden celebrated a Business Roundtable with the CEOs of the largest corporations in the American economy. He boasted:

6.7 million jobs last year–the most ever created in one year; more than 7 million now. 678,000 created just last month, in one month. Unemployment down to 3.8 percent. Our economy grew at 5.7 percent last year, and the strongest in nearly 40 years… We reduced the deficit by $360 billion last year… And we’re on track to reduce it by over $1 trillion this year.

Biden is understandably thrilled beyond words. Yet, when he deliberately orchestrated a confrontation with Russia at this juncture, it didn’t occur to him what crippling impact and downstream consequences his draconian “sanctions from hell” against a major G20 economy would have on the developing economies.

A UNCTAD report on March 16, titled The Impact on Trade and Development of the War in Ukraine, concludes,

This rapidly evolving situation is alarming for developing countries, and especially for African and least developed countries, some of which are particularly exposed to the war in Ukraine and its effect on trade costs, commodity prices and financial markets. The risk of civil unrest, food shortages and inflation-induced recessions cannot be discounted…

Now, how do these meek and wretched countries of the planet import from Russia when Biden and EU chief Ursula Gertrud von der Leyen join hands to block the banking channels for trading with Russia? Can Delaware find a solution?

The cruelty and cynical complacency with which the Biden Administration and the EU conduct their foreign polices is absolutely stunning. And, mind you, all this is happening in the name of “democratic values” and “international law”!

India cannot agree with the U.S. and EU’s reckless attempt to weaponise global economic links. The fact of the matter is that the U.S. and EU may not even win this war in Ukraine. Russia has almost completed 90 percent of its special operations. Unless Biden allows Kiev to agree to a peace settlement, the division of Ukraine along the Dnieper river is in the cards.

The U.S. is destabilising the European security order while the western sanctions are destabilising the global economic order. The U.S. and EU must bear responsibility for this collateral damage. The West is in panic that the world is living in the Asian century already.

“One reason for the optimism across the heart of Asia is the immense natural resources of the (Asian) region,” writes the famous Oxford historian Peter Frankopan in his recent book The New Silk Roads: The Present and Future of the World. For, the Middle East, Russia and Central Asia account for almost 70% of global proven oil reserves, and nearly 65% of proven natural gas reserves.

Or there is the agricultural wealth of the region that lies between the Mediterranean and the Pacific… which account for more than half of all global wheat production… (and) account for nearly 85% of global rice production.

Then there are elements like Silicon, which plays an important role in microelectronics and in the production of semiconductors, where Russia and China alone account for three-quarters of global production; or there are rare earths like yttrium, dysprosium and terbium that are essential for everything from super magnets to batteries, from actuators to laptops–of which China alone accounted for more than 80% of global production… Resources have always played a central role in shaping the world… This makes the control of the Silk Roads more important than ever.

The West still seems to want to “return to ‘normal’”, Frankopan writes, “and expects the newcomers to resume their old positions in the world order.” Clearly, India, an erstwhile British colony, understands the real agenda behind Washington and Brussels’ geopolitical struggle with Russia. Principally, India is looking in all directions–Russia and China included–for partnerships.

If the Chinese news website Guancha is correct, which it mostly is,

China-India diplomatic relations will significantly ease and enter a recovery period. China and India will realise the exchange of visits of diplomatic officials in a relatively short time. Chinese officials will go to India first, and Indian Foreign Minister Jaishankar will come to China.

This is good news. Modi’s unique stature in Indian politics enables him to take difficult decisions. The renewed mandate he secured from the heartland puts him in a position to break fresh ground in foreign policy.