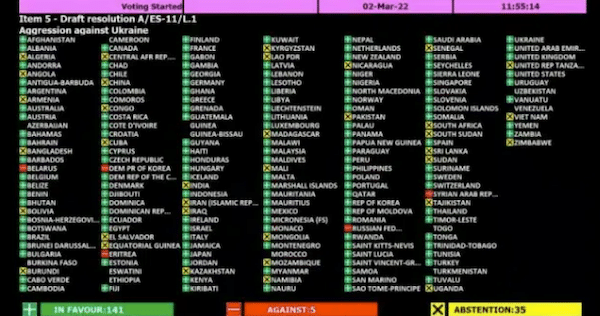 On March 2 of this year the UN General Assembly met in an Emergency Session to pass a non-binding resolution condemning Russia’s February 24 intervention in Ukraine.1 141 countries voted for the resolution, 5 voted against, 35 abstained, and 12 did not vote. (Reported: Guardian, Al Jazeera, iNews)

In the absence of any reliable opinion poll of the world’s 7.9 billion people, this vote may indicate that the majority of humanity sympathizes with Russia in Ukraine. The statistics presented below show that only 41% of the world’s people live in countries that joined the U.S. in voting for the UN resolution.

This lopsided vote is even more striking if you consider the demographics. Populations represented by governments that did not vote for the resolution are much more likely to include the world’s poorest nations, nations with younger populations, “nations of color,” nations of the Global South, and nations in the periphery of the world economic system.

To put it another way, although the war is nominally a conflict between two developed and ethnically white nations, Russia and Ukraine, this UN vote suggests the war may be viewed by much of the world as a fight over the global political and economic system that institutionalizes the imperial hierarchy, the distribution of nations between rich and poor, and global white supremacy.

The UN vote by population

41% or 34% amounts to a resounding, humiliating defeat for the U.S. on this non-binding UN resolution. Instead it is reported in the west as a U.S. victory and an “overwhelming” worldwide condemnation of Russia.

The UN vote and GDP per capita

The UN vote and the core/periphery divide

Another way to show the wealth divide in the UN vote is by distinguishing core and peripheral countries. In world-systems theory the surplus value of labor flows disproportionately to the core countries: “The countries of the world can be divided into two major world regions: the ‘core’ and the ‘periphery.’ The core includes major world powers and the countries that contain much of the wealth of the planet. The periphery has those countries that are not reaping the benefits of global wealth and globalization.” (Colin Stief, ThoughtCo.com, 1/21/20)

The difference here is stark. Every single core country voted for the resolution and every country that did not is either in the periphery or in some cases, like Russia or China, in the semi-periphery.

The UN vote and median age

Of the twenty entries with the lowest median ages (15.4 to 18.9), only half voted for the resolution.

The UN vote and “countries of color”

What follows is a brief sketch of events leading to the February 24 Russian intervention that prompted the UN resolution. It is a history seldom mentioned in the mainstream media, though it is easily found in selected alternative and now-suppressed media. It is presented here as a possible, partial explanation of why the UN resolution had so little support measured by population.

U.S./NATO has directed aggression toward Russia for decades, advancing NATO forces ever closer to Russia’s western border, ringing Russia with military bases, placing nuclear weapons at ever closer range, and breaching and discarding treaties meant to lessen the likelihood of nuclear war. The U.S. even let it be known, through its planning documents and policy statements, that it considered Ukraine a battlefield on which Ukrainian and Russian lives might be sacrificed in order to destabilize, decapitate and eventually dismember Russia just as it did Yugoslavia. Russia has long pointed out the existential security threat it sees in Ukrainian territory, and it has made persistent, peaceful, yet fruitless efforts over decades to resolve the problem (See Monthly Review’s excellent editors’ note).

Recent history includes the 2014 U.S.-orchestrated coup in Ukraine, followed by a war of the central government against those in the eastern regions of Donetsk and Lugansk resisting the coup government and its policies. Those policies include a ban on the Russian language, the native tongue of the region and a significant part of the country (ironically, including President Zelensky).

By the end of 2021 the war had taken 14,000 lives, four-fifths of them members of the resistance or civilian Russian speakers targeted by the government. Through years of negotiations Russia tried and failed to keep the Donetsk and Lugansk regions inside a united Ukraine. After signing the Minsk agreements that would do just that, Ukraine, under tight U.S. control, refused to comply even with step one: to talk with the rebellion’s representatives.

As to why the intervention happend now, Vyacheslav Tetekin, Central Committee member of Russia’s largest opposition party, the Communist Party of the Russian Federation, explains:

Starting from December, 2021 Russia had been receiving information about NATO’s plans to deploy troops and missile bases in Ukraine. Simultaneously an onslaught on the Donetsk (DPR) and Lugansk People’s Republics (LPR) was being prepared. About a week before the start of Russia’s operation the plan was uncovered of an offensive that envisaged strikes by long-range artillery, multiple rocket launchers, combat aircraft, to be followed by an invasion of Ukrainian troops and Nazi battalions. It was planned to cut off Donbas from the border with Russia, encircle and besiege Donetsk, Lugansk and other cities and then carry out a sweeping “security cleanup” with imprisonment and killing of thousands of defenders of Donbas and their supporters. The plan was developed in cooperation with NATO. The invasion was scheduled to begin in early March. Russia’s action pre-empted Kiev and NATO, which enabled it to seize strategic initiative and effectively save thousands of lives in the two republics.

All this may have informed the world’s overwhelming rejection of the U.S.-backed UN resolution condemning Russia, which western media perversely considers a U.S. victory simply because the resolution passed. Never mind that it passed in a voting system where Liechtenstein’s vote carries the same weight as China’s.

The Global South also knows from bitter experience that unlike the West, neither Russia nor its close partner China habitually engage in bombings, invasions, destabilization campaigns, color revolutions, coups and assassinations against the countries and governments of the Global South. On the contrary, both countries have assisted the development and military defense of such countries, as in Syria, Venezuela, Nicaragua, Cuba, Iran and elsewhere.

Just as the imperial core of North America, Europe and Japan does not represent the world in their population numbers, demographics, wealth, or power, neither does the imperial core speak for the world on crucial issues of war, peace, justice, and international law. Indeed the Global South has already spoken to the Global North so many times, in so many ways, with patience, persistence and eloquence, to little avail. Since we in the North have not been able to hear the words, perhaps we can listen to the cry of the numbers.