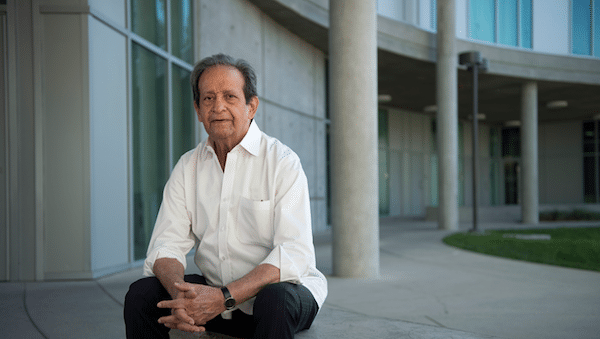 UCI Chancellor’s Professor of Comparative Literature Aijaz Ahmad passed away in his home in Irvine on March 9, 2022. He was an internationally prominent literary and critical theorist at the forefront of Marxist cultural thought. Ahmad joined UCI’s Department of Comparative Literature in 2016 with a position in global critical theory and comparative literature, after having previously held various appointments as a Distinguished Visiting Professor in Critical Theory, first in spring 2011. Over more than three decades, Ahmad authored seven highly influential monographs, as well as hundreds of academic essays and journalistic pieces, focusing on literature and culture, internationalism, imperialism and post-colonialism.

His book In Theory: Classes, Nations, Literatures (Verso, 1992) completely reshaped the intellectual terrain in critical theory and postcolonial studies. In subsequent years, he engaged leading voices in critical theory, including Jacques Derrida, Slavoj Žižek, Alain Badiou and Gayatri Spivak, revisiting debates about theory and politics from the perspective of the neoliberal economy that emerged after the collapse of the Soviet Union and the end of the Cold War.

In his more recent work, he set a new paradigm in critical theory by exploring the role of political theory in the post-communist era of the 1990s. Lineages of the Present: Ideology and Politics in Contemporary South Asia (Verso, 2000) established him not only as one of the most influential critical theorists from South Asia, but also as one of the most powerful voices in theoretical debates about global nuclear politics. Finally, with On Communalism and Globalization (Three Essays Collectives, 2007), which analyzes neoimperialism and the increasing influence of fascism in third world societies, Ahmad became one of the most challenging voices in debates about the global neoimperial turn.

In a similar vein, many of Ahmad’s essays stimulated new thought in various fields. They were translated into many languages and reprinted in new editions and contexts. “Postcolonial theory and the ‘Post’ Conditions” – a topic on which Professor Ahmad held multiple graduate seminars at UCI – critically analyzes the main philosophical, political and epistemological trends in today’s diverse global cultures. “Islam, Islamisms and the West” offered new perspectives on how the crisis in today’s Islamic world is entwined with crises of global capitalism.

In addition to his career in literary studies, critical and literary theory, and global Marxism, Ahmad also established himself as a distinguished poet and novelist in his native Urdu with several books of poetry and a novel. His essays on the history of Urdu as a literary language as well as on the multilingual and multivocal character of Indian literature are a testimony to his commitment to lend a voice to literary works beyond the monolingual hegemony of English. Ahmad was also highly regarded as a translator. Translations of Urdu poems have appeared in The Hudson Review and in Poetry, and he has also collaborated on translations with distinguished poets, including Adrienne Rich, Mark Strand, W. S. Mervin and William Stafford.

He held academic positions internationally before accepting his tenured position at UCI in 2016. Previously, he taught at York University (Toronto), Jawaharlal Nehru University (India), Jamia Millia University (India), the School of African and Oriental Studies (London) and the University of São Paulo (Brazil). He delivered lecture series at Oxford, Cambridge, universities in South Asia and Europe as well as the Distinguished Wellek Lectures in Critical Theory at UCI.

A charismatic teacher, Ahmad inspired students with his intellectual rigor and passion, pushing them to excel in their work. His foremost concern was to teach how to think and read critically, a skill he deemed indispensable to understanding the global entanglements of today’s world.

His role as a public intellectual and scholar-activist on the political left was as important for him as his academic career. Ahmad was a well-known public intellectual: he made regular TV appearances in India, was a leading voice on the web-based news portal Newsclick and wrote frequently for journals such as Frontline (India) and Monthly Review (U.S.). Given that he moved between continents and taught in India, North America, Brazil and Europe, his career did not follow the linear trajectory of conventional academic appointments. After holding a tenured appointment at Rutgers University from 1975 to 1992, he resigned to accept a senior fellowship at the Indian Council for Social Research, resuming his career as one of India’s foremost public intellectuals. He became senior editorial consultant of Frontline and held a series of highly prestigious distinguished visiting professorships, such as the Rajiv Gandhi Chair at Jawaharlal Nehru University, the Khan Abdul Ghaffar Khan Chair at Jamia Millia and the Asian College of Journalism.

Having worked on topics of imperialism, nationalism, world literature, translation studies and literary production and interpretation, Ahmad had recently turned his attention to the pressing topics of religion and culture in the fraught international climate of the 21st century. In 2020, LeftWord published Nothing Human is Alien to Me – edited by Vijay Prashad, with interviews conducted by Sudhanva Deshpande, Mala Hashmi and Vijay Prashad – about Ahmad’s life and work. It was to be followed by the publication of Ahmad’s final project, consisting of introductions to Marx’s political writings.

As Vijay Prashad wrote, “Aijaz gave us confidence when the eclipse of hope seemed almost complete.” He will be remembered by generations of scholars from all over the world.

With contributions from Gabriele Schwab, UCI Distinguished Professor of Comparative Literature and Anthropology