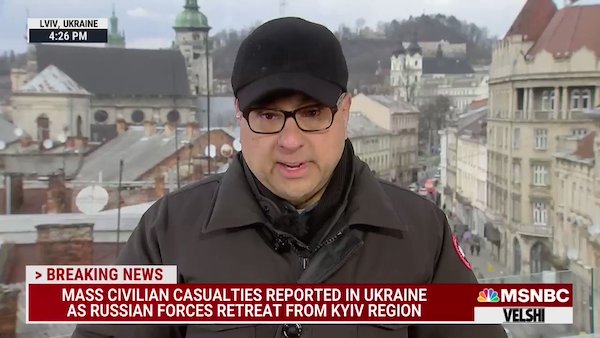 In an appearance on the MSNBC show Velshi, The Modern War Institute’s John Spencer explicitly advocated direct U.S. military conflict with Russia due to allegations of war crimes in the Ukrainian city of Bucha.

“I’m ready to commit at this moment–unlike I was before this day–to put people in direct contact with Russia, to stop Russia,” Spencer said.

Call it peacekeeping. Call it what you will. We have to do more than provide weapons. And by ‘we,’ I mean the United States. Yes, we’ll do it as a coalition with lots of other people, but we are the example. So put boots on the ground, send weapons directly at Russia.

Notice the bizarre verbal gymnastics being used by Spencer to obfuscate the fact that he is advocating a hot war with a nuclear superpower: “put people in direct contact with Russia,” “send weapons directly at Russia”. Who talks like that? He’s calling for the U.S. military to fire upon the Russian military, he’s just saying it really weird.

To be clear this isn’t just some arms industry-funded think tanker saying this; The Modern War Institute is part of the Department of Military Instruction for the United States Military Academy, which is operated directly by the Pentagon.

Asked by the show’s host Ali Velshi what he thought of warnings that direct military confrontation with Russia could lead to nuclear war, Spencer said,

It is a huge risk, I understand that. But today is different.

Velshi himself was much more to the point than his guest, both online and on social media.

“We are past the point of sanctions and strongly-worded condemnations and the seizing of oligarchs’ megayachts,” Velshi told his MSNBC audience.

If this is not the kind of moment that the United Nations and NATO and the UN and the G-20 and the Council of Europe and the G-7 were made for, what was the point of these alliances if not to stop this? The world cannot sit by as Vladimir Putin continues this reign of terror.

“The turning point for the west and NATO will come when the sun rises over Kyiv on Sunday, and the war crimes against civilian non-combatants becomes visible to all,” Velshi said on Twitter over the weekend.

There is no more time for prevarication. If ‘never again’ means anything, then this is the time to act.

Asked what specifically he meant by this, Velshi clarified that he was advocating,

“Lines have been crossed and war crimes have been committed by Putin that make direct military intervention something NATO now must seriously consider,” Velshi added.

Hi Caitlin. Thank for your response. I tweeted because the choice of letting Russia invade a sovereign country & nuclear war is not binary. We cannot possible subscribe to a world order that abhors authoritarian and war crimes, yet allow this to happen.

When I called Velshi a fucking lunatic for expressing these views (to my mind the only sane response to such madness), he argued that going to war with Russia for Ukraine would not necessarily lead to nuclear war, claiming that “A no fly zone is not so different from the endless supply of weaponry the west is sending in to Ukraine.”

These are not sane or acceptable things for mainstream pundits to be telling people. Directly attacking the Russian military would indeed risk unleashing a chain of rapid escalations that could easily lead to full-scale nuclear war; there would be far too many small, moving parts for this to be anywhere remotely close to predictable or controllable. A no-fly zone over Ukraine would immediately put NATO powers in direct hot war with Russia, which is in fact completely different from shipping weapons to Ukrainian forces.

The fact that a nuclear superpower cannot be regarded in the same way as a nation without nukes has been basic, common sense orthodoxy for all major powers since Stalin got the bomb. This is not some kind of advanced esoteric understanding that you can only grasp if you’ve been studying this stuff for years; as far as I know children are still learning about the history of nuclear weapons and Mutually Assured Destruction in grade school. This isn’t something you should have to explain to grown adults, much less influential mainstream news media pundits.

But it’s becoming more and more common. The line that we’re already in World War 3 and need to begin acting accordingly is showing up more and more often. The idea that NATO powers might be able to get away with attacking the Russian military in Ukraine without sparking a nuclear exchange is fast becoming its own genre of western foreign policy punditry, and that trend looks to accelerate with the latest (arguably pretty dubious) claims of Russian atrocities in this war. 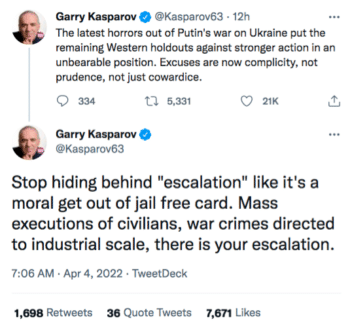 Already we’ve got Velshi’s cries for World War 3 joined by the likes of Human Rights Foundation Chairman Garry Kasparov, who apparently spent so long training to beat a machine that he turned into one:

You’ve also got opinion makers in outlets like The New York Times telling people that “The United States and NATO should be less deferential to Mr. Putin’s attempt to wield the threat of nuclear weapons–not only for the sake of supporting Ukraine but also to ensure global geopolitical stability in the future.”

There’s also the galling White House press conferences in which ambitious reporters aggressively demand to know why the Biden administration isn’t doing more to escalate against Russia, as clear an illustration as you could ask for of the fact that the mainstream press are only allowed to be pushy and confrontational with U.S. government officials when they’re demanding more bloodshed.

As we’ve discussed previously, even if these increasingly loud calls for hot war between nuclear superpowers don’t immediately succeed, what they do is push the Overton window of mainstream discourse all the way over toward the most warmongering extreme possible so that calls for more escalation seem moderate and calls for de-escalation look like extremist apologia for Vladimir Putin. In the very best-case scenario they leave people far more open to consenting to far more nuclear brinkmanship than any thinking person should ever consent to.