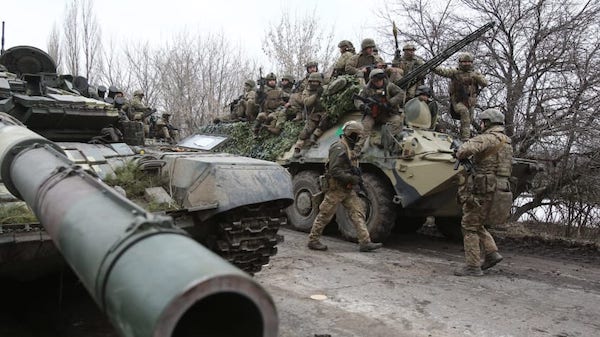 An indignant Moscow has angrily demanded a United Nations Security Council meeting on Monday over the allegations of atrocities by Russian troops in areas around Kiev through the past month. Prima facie, this allegation is fake news but it can mould misperceptions by the time it gets exposed as disinformation.

The Russian Defense Ministry said on Sunday that the Russian Armed Forces had left Bucha, located in the Kiev region, on March 30, while “the evidence of crimes” emerged only four days later, after Ukrainian Security Service officers had arrived in the town. The ministry stressed that on March 31, the town’s Mayor Anatoly Fedoruk had confirmed in a video address that there were no Russian troops in Bucha. However, he did not say a word about civilians shot dead on the street with their hands tied behind their backs.

Even more surprising is that within minutes of the “breaking news”, western leaders—heads of state, foreign ministers, former politicians—popped up with statements duly kept ready and only based on the videos, seconds-long videos and a clutch of photos, ready to pour accusations. No expert opinion was sought, no forensic work was done, no opportunity given to the accused to be heard.

French President Emmanuel Macron broke his election campaign where he’s in a dead heat with Marine Le Pen for reelection in next Sunday’s poll to brand the alleged Russian atrocities as “war crime”. So did German Chancellor Olaf Scholz who is in big trouble too as Germany is posting inflation at +7.3 percent in March.

There’s nothing unusual about beleaguered politicians catching hold of bogeymen. Intelligent minds like Macron and Scholz’s must be realising by now their flawed policies leading inexorably to such a strategic defeat at the hands of Russia. But the big question is: Why such theatrics just at this point?

The fake news surfaced even as the Phase 2 of Russia’s special operation is slated to begin within the  week in the eastern Donbass region. Something like 60-80000 Ukrainian troops, rated to be the best units of the armed forces, have been encircled in Donbass. 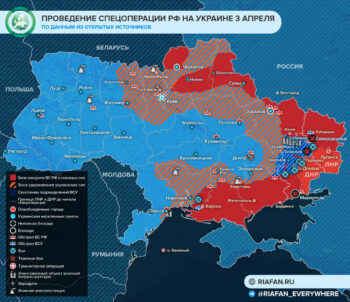 The Russian feint paid off in pinning down the Ukrainian forces in Kiev through past month. By the time the truth dawned on the Kiev set-up ( and their western “advisors), the damage was done. The enormity of the resultant situation needs some explanation.

The above map reproduced from the Novosti (unfortunately, in Russian language) on the exact ground situation as of April 3 and the commentary by Ivan Andreev, an experienced war correspondent who covered the Russian operations in Syria, gives the salience of the cauldron in Donbass where the crème de la crème of the Ukrainian forces numbering several divisions are entrapped, isolated by opposing forces from their logistical base and other friendly forces.

The cauldron is fairly large, marked in blue and black stripes on the map in the upper reaches of the Donbass region in the direction of Kharkiv. The massive Russian column that retreated from the Kiev region a week ago is manoeuvring in a big arc toward that cauldron bypassing Chernihiv in the north and the cities of Sumy and Kharkiv (near the Russian border in the northeast).

The Ukrainian forces are well-armed and have fortified themselves heavily but are unable to escape from the entrapment. Nor is it feasible for Kiev to send reinforcements as the countryside to the west through consists of largely open farmlands (all the way to the Dniepr River). The Russians have air supremacy and it is impossible to hide any enemy movements from their roving eyes.

The Russian forces have put out of action all nearby airports and destroyed the nearby Ukrainian oil reserves systematically through Phase 1 of the operation.As I wrote in a previous blog, three days ago, Russian forces dealt a devastating blow:

Notably, the Mirgorod military airfield in central Poltava Region, a strategically important hub, has been taken out of action and several Ukrainian combat helicopters and aircraft found in its camouflaged car parks, as well as fuel and aviation weapons depots have been destroyed.

Equally, Kharkiv has been surrounded and “in a high-precision strike with the Iskander operational-tactical missiles on the defence headquarters in the city on Thursday, “more than 100 nationalists and mercenaries from Western countries” were confirmed as killed.”

Nonetheless, the Ukrainian forces are expected to put up a good fight rather than surrender—although surrounded, without air cover, and having no scope to rotate forces or enough fuel to engage in maneuver warfare and with ammunition running out.

To be sure, a major battle is approaching, the most decisive in the entire Russian special operation so far. The catch is, the cauldron also has plentiful settlements of ethnic Russian population (including Russian passport holders) and the offensive will be a long grind patiently executed to avoid civilian casualty or destruction of civilian infrastructure.

That is to say, Phase 2 may last anywhere up to a month or so to be completed. Make no mistake, the Russians have to win here (which they will) as they will also be breaking the back of the Ukrainian armed forces. Despite all the bluster by Zelensky, Kiev will realise the enormity of the defeat and his western mentors will see the writing on the wall too.

To be sure, a whole month lies ahead where the western strategy will be to incessantly manufacture fake news, intensify the information war. Even some false flag operation may be staged under the supervision of western intelligence operatives.

In a worst case scenario, Kiev may even play its last card—chemical weapons. Russia has publicised details of locations where Ukraine has kept stockpiles of chemical weapons. The U.S. is known to have supplied as military aid special gear (gas masks, protective clothing, etc.) to cope with chemical weapons and given special training for collective protection.

The alacrity with which Macron and Scholz consumed the fake news is a harbinger of a new phase in the information war. Succinctly put, there is a sober awakening in Paris and Berlin that the Russian operation is successfully meeting the set objectives.

“April”, TS Eliot wrote in his masterpiece The Wasteland, “is the cruellest month, breeding Lilacs out of the dead land, mixing Memory and desire, stirring Dull roots with spring rain.” But the dark irony of this year’s “Aprilness” is going to be that the fecundity and renewal here will be about Russia’s regeneration in a world of both history and the myths spawned by quarantined western minds.