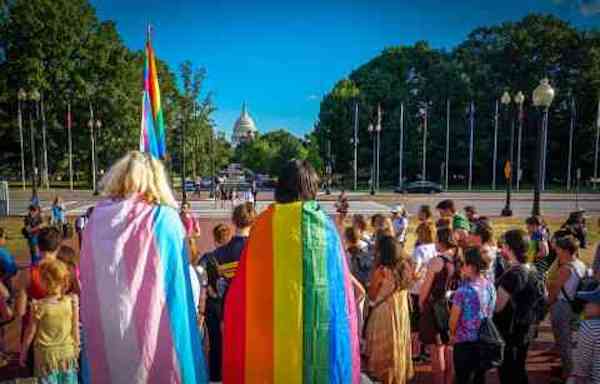 The infamous “Don’t Say Gay” bill has officially passed in Florida, set to go into effect on July 1.

The legislation formally known as the Parental Rights in Education bill, which would prevent teachers from educating young children about gender identity and sexual orientation, has been panned by advocates, politicians, and corporations alike.

But questions remain about how legislation like the Florida bill could impact the education system of young Canadians if similar legislation made its way stateside.

Debbie Owusu-Akyeeah is the executive director of the Canadian Centre for Gender and Sexual Diversity (CCGSD), a national LGBTQ organization dedicated to eliminating all forms of bullying, discrimination, and homophobia in schools.

In an interview with rabble.ca, Owusu-Akyeeah called the Don’t Say Gay bill “as American as a Big Mac,” noting that it seems like every day there is a different threat to the livelihoods of LGBTQ individuals, especially trans people.

“Right-wing groups often use youth as part of the witch hunt—young people and children are just an easy way to garner public opinion on anything.

“Anything that’s constructed as a threat to young people, it matters, because you don’t want to be seen as the person who thinks that threatening young underage people is a good thing,” Owusu-Akyeeah said.

While policing the lives of LGBTQ individuals is nothing new, Owusu-Akyeeah finds it particularly interesting that “education” is becoming the institution of choice to promote right-wing rhetoric.

Owusu-Akyeeah noted that much of the rhetoric dates back to the Cold War, when language around communism was contrasted with the hegemonic family structure more common in the United States.

“Progress is seen as a threat to the most powerful people and any attempt to make education progressive, to change cultures long-term, it all just fits within their toolbox in terms of rhetoric,” she said, calling it “extremely powerful.”

While the United States offers a national education program, in Canada, matters of education rest with the provinces. That’s a problem, Owusu-Akyeeh says, because many decisions are made at the school board level, where right-wing bigots can thwart efforts to provide progressive education to young people.

She pointed out that school board trustees can decide what books are brought into libraries, a method of policing that is also weaponized in the U.S. by individuals who don’t want children to learn about societal issues like racism and homophobia.

There is nothing within Canadian political institutions that prevents this from happening.

Queer students at greater risk of facing harassment, discrimination, and even violence

On March 8, U.S. Secretary of Education Miguel Cardona issued a statement on the Parental Rights in Education Bill, arguing “leaders in Florida are prioritizing hateful bills that hurt some of the students most in need.”

Cardona went on to say that “The Department of Education has made clear that all schools receiving federal funding must follow federal civil rights law, including Title IX’s protections against discrimination based on sexual orientation and gender identity.”

In an op-ed for NBC News Think, Daniel Putnam, Furman Scholar at the New York University School of Law said he believes the Don’t Say Gay bill is unconstitutional.

“A well-drafted law would define its terms carefully,” Putnam wrote.

Precisely because [the bill] does not do so, it could be read to prohibit any of these activities. Yet the U.S. Constitution does not tolerate that degree of vagueness.

In a statement to rabble.ca, queer advocacy organization Egale Canada noted the the bill “creates significant barriers for LGBTQI students to access education by putting them at greater risk of facing harassment, discrimination, and even violence.”

“Egale’s Still in Every Class in Every School report shows alarming rates of bullying, poor mental health, and lack of support from educators for LGBTQI students, with 62% of LGBTQI students reporting they feel unsafe at school, compared to 11% of non-LGBTQI students.

Every student deserves the right to learn in a safe and inclusive environment. We commend the young people who are fighting for their right to an education free from discrimination.

Nik Basset is an education and Gay Straight Alliance coordinator at The Youth Project, a non-profit organization in Nova Scotia that provides support and services to youth aged 25 and under “around issues of sexual orientation and gender identity.”

The Youth Project is a unique organization in that it’s also directed by youth. According to their website, “youth have decision-making control over the direction and action of the Project.”

In an interview with rabble.ca, Basset noted that while Canadian provinces aren’t necessarily bound to legislation like the Don’t Say Gay bill, public schools in Nova Scotia don’t offer any education around gender and sexual orientation for students up to grade 3.

“What’s included are things like kindness and respect to diversity of people…but nothing explicit,” Basset said.

“It isn’t until grade four that explicit education around gender identity and expression is offered, and it isn’t until grade five where sexual orientation is then introduced,” Basset said, noting the lack of education for young folks can compromise the safe, inclusive, and affirming classroom atmosphere children and parents can expect from educators.

“You can’t groom someone to be gay. You’re born gay.”

Andy Cohen, host of Bravo’s Watch What Happens LiveI, perhaps said it best on his program earlier this month when he called out the discriminatory legislation for what it is: one big dogwhistle.

“There’s not a mass conspiracy of kindergarten teachers who are plotting to teach children to be gay,” he said, adding he’s concerned about tthe ‘deliberately vague language’ in the legislation that could have far reaching consequences for children of queer families.

He noted that under the Don’t Say Gay legislation, his three-year-old son Benjamin wouldn’t be allowed to go to school and talk about his gay dad during class—because a teacher engaging in that conversation could be “considered illegal.”

You can’t groom someone to be gay. You’re born gay.

That sentiment is shared by Edmonton Griesbach NDP MP Blake Desjarlais. In a statement to rabble.ca, Desjarlais called it “unacceptable for legislators to target 2SLGBTQI+ students and families with bills that deny their existence and deny education and services affecting their lived experiences.”

“This is not something we’re immune to here in Canada,” Desjarlais said.

Though we have seen the ban on conversion therapy pass through Parliament…[w]e’ve seen very little progress from the Liberals on ending the ban on blood donations or the employment discrimination that LGBTQI2S+ people experience, in addition to increasing access to gender confirming procedures and medication remaining unattainable.