On March 27, the Socialist Unity Party and Struggle-La Lucha newspaper hosted a webinar called “Stop the War Lies: Voices from Donbass.” This was a unique opportunity for the U.S. anti-war movement to hear directly from people in the Donetsk and Lugansk People’s Republics (DPR and LPR), whose voices are silenced by the Western mass media’s pro-Ukraine war propaganda.

A day before the event, organizers learned that the Zoom video conferencing service had suddenly blocked users in the DPR and LPR. Efforts to work around the ban through other services were unsuccessful, but thanks to pre-recorded messages from three speakers, the webinar was held successfully. The webinar was live streamed to Facebook and the full recording is available to watch on YouTube.

The webinar was chaired by John Parker, Socialist Unity Party candidate for U.S. Senate in California, and SLL co-editor Greg Butterfield. Messages of solidarity were delivered by Jacqueline Luqman of the Black Alliance for Peace and Carlos Martinez of the International Manifesto Group. Solidarity messages were also received from the Workers Voice Socialist Movement, Communist Workers League, International Action Center and others.

Special thanks to translators Jane Letova, a Donbass solidarity activist from Moscow, and Leonid Ilderkin, a leader of the Union of Political Refugees and Political Prisoners of Ukraine.

Following are transcripts of the speakers’ remarks. 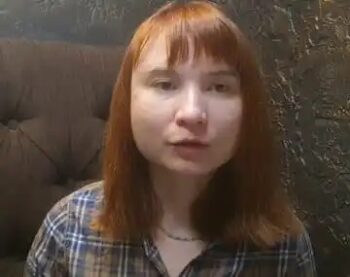 Melnikova has covered Ukraine’s war on Donbass for several years.

Heavy shelling of the Donetsk People’s Republic continues. There are wounded people every day among civilians. There are civilian deaths. I think it’s very important that you get to hear about this, because this is something that is not covered in Western media.

The most civilian casualties are happening in the territories that are being liberated from the Ukrainian military by the army of the Donetsk People’s Republic, such as Mariupol. But in spite of this, shelling of front line cities and villages continues.

The biggest tragedy of the last few days, as you may have heard, is the rocket that fell in the center of Donetsk on March 14. There were over 20 killed and 30 wounded. There is a library next to the site and a lot of public transportation goes through there.

A few days later, another rocket hit a busy area of Donetsk at 8 a.m., the time people go to work. Four women were killed–workers in the market area who were going to their jobs that day.

One good thing is that, as more territories are liberated in the Donetsk People’s Republic, the less shelling and other attacks like this will happen.

The Ukrainian army sees such situations as an opportunity for revenge against those who voted for independence from Ukraine in 2014. They’re trying to create as many civilian casualties as they can while they are being forced out by the Donetsk and Lugansk People’s Militias.

The Ukrainian army uses tactics like putting its tanks in highly populated areas where there are buildings with many apartments. They are using the buildings and the people inside them as a human shield. This is a tactic they also used in 2014 and 2015 in Donetsk. 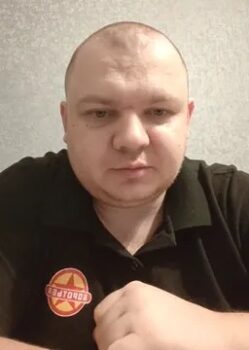 Albu is a coordinator of the Marxist organization Borotba (Struggle), banned in Ukraine. He is a survivor of the May 2, 2014, massacre at the Odessa House of Trade Unions.

I’m pleased to have the opportunity to speak to you, comrades.

In the Lugansk People’s Republic, life has changed a lot since the beginning of the joint military operation by Russia and the Donbass republics. The shelling of cities and towns has been stopped. Terrorist actions have been stopped.

I remember the days when the Ukrainian military was trying to place as many of their forces as possible near the LPR’s borders. And I also remember how, when that happened in January and February, the republic tried to bring it to the world’s attention that the Kiev regime was bringing more and more forces and weapons to the frontline.

The situation reached the point where the army and nazi regiments like Azov Battalion brought their reserves of artillery shells, explosive devices and fuel for their military vehicles to the closest point to the LPR and Lugansk, the capital city. This was clearly preparation for a major assault. It was at this point that the people of the republic began to evacuate their families abroad, to safety.

By March 4, everyone who evacuated from the LPR could have returned safely. Life began to return to the LPR because the People’s Militia, with some help from the Armed Forces of the Russian Federation, pushed back the nazis and nationalist forces of Kiev to a point where they could no longer shell the towns, cities and villages of the Lugansk region.

The situation in Donetsk is not as good, because there the Ukrainian forces are much stronger and larger in number, and they keep shelling the capital and surrounding cities.

There were terror attacks by Kiev in Donetsk with powerful missiles of great explosive capacity. For instance, the March 14 attack on central Donetsk that instantly killed 23 people in the street. Because of this type of attack by the Kiev regime, the LPR has temporarily closed schools as a precaution. Now the children are learning remotely. We hope this situation will soon be overcome as well.

Speaking about the achievements of the joint military operation, today the first stage has been achieved. The forces of the Kiev regime have been pushed back deeper into the country so they are not such a threat to the Lugansk and Donetsk People’s Republics, Russia and Belarus. They are now pushed back toward central Ukraine and westward. But in the Donetsk People’s Republic they are still present at several points in range to shell the city of Donetsk and other places like Gorlovka and Makeevka.

Another important accomplishment was to uncover biological research laboratories created by foreign powers in Ukraine. Some say they are of U.S. origin, others that they are British. And these biological laboratories, apparently for the creation of viral weapons, were discovered and documentation partially secured. There is evidence of what these laboratories did. There are about 15 of them throughout Ukraine. Some of them are already captured by the approaching forces of Ukrainian opposition with the help of the Russian Federation.

Concerning casualties of this conflict: You see that the civil war has had a very cruel development. It’s not a very pleasant situation with this ongoing civil war, including the current involvement of the Russian Federation. The scale of casualties is high. The Ukrainian army accounts for about 50,000 casualties, including many wounded. Most likely, it is less than this number for the advancing forces of the Ukrainian opposition, the People’s Republics and the Russian Federation. But we cannot count it exactly at this point.

Nevertheless, the tragedy is large-scale, as it was in other civil wars. For instance, the Spanish Civil War, when the republic tried to defend itself from the approaching fascist rebels, and failed. The situation for now is not finished on either side. In my native city, Odessa, I must admit the situation is not certain.

Long live the struggle against imperialism! No pasarán! 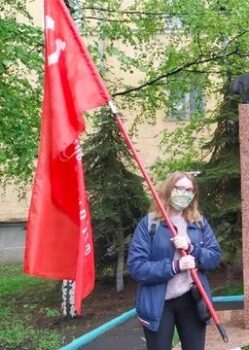 Katya A., activist in Donetsk

Katya A. is leader of the Aurora Women’s Club and a feminist, socialist and internationalist organizer.

I have been living in Donetsk for most of my life. I lived through almost the entire war and the economic blockade.

For more than a month we have been living in a phase of active escalation of the conflict. But I want to note that the escalation of the conflict to one degree or another took place through all eight years of the war. Since 2017, the intensity of shelling has gradually decreased, but people continued to die–from artillery shelling, mines and even from snipers. I’m talking about the civilian population of Donbass.

The Organization for Security and Cooperation in Europe (OSCE) report says that in the “territories not controlled by Ukraine” (LPR and DPR) since 2017, three times more civilians have suffered from the war than in the controlled ones. I do not take into account now the destruction of infrastructure, residential buildings and psychological harm.

According to official data, more than 1,600 residential buildings, more than 400 infrastructure facilities, including hospitals, schools, gas supply and water supply facilities, have been damaged in the DPR since Feb. 17 this year. The threat of complete disconnection of the republic from the water supply is hanging over us. You can imagine what this means in a pandemic.

People in frontline areas especially suffer from this situation. For example, in the Petrovsky district of Donetsk, the shelling is non-stop. In some areas, there’s been no water supply at all for a long time. This situation places a heavy burden on the shoulders of women, who still do most of the housework.

Our authorities have also been evacuating people since Feb. 17. But many people decided to stay. Many have elderly relatives who find it extremely difficult to make such trips. Some refused to go because they had already experienced the terrible phases of the 2014-2015 war. Some are afraid of the unstable refugee status.

We have no problems with food yet, but everything has significantly increased in price. And we are feeling the consequences of the sanctions policy. Important medicines are disappearing from sale.

The biggest problem is with the water supply. Otherwise, our workers are trying to fix breakdowns quickly. In February, one of the workers of the gas service was killed due to shelling when he and other colleagues came to repair the consequences of another shelling that happened about an hour earlier.

The people of Donbass need peace more than anything else in the world. We’ve been talking about this for many years. A humanitarian catastrophe has developed in the newly liberated cities. People need the most basic things–food, clean water, medicines.

I think the socialists of the Western world should condemn the warmongers. It is necessary to prevent a full-scale NATO intervention in the war. It should be understood that all the weapons that are supplied to Ukraine are used, among other things, against the people of Donbass.

It is also necessary to consistently criticize the hypocritical sanctions policy. Such a policy harms the poorest segments of the population. In particular, people in the Donbass, against whom the Ukrainian state is waging war, suffer from sanctions.

We want to express our gratitude to all our comrades for their solidarity. We admire the struggle of the U.S. workers in the very center of global imperialism. Capitalism brings a lot of grief to the working class. But together we can overcome injustice and build a new world.