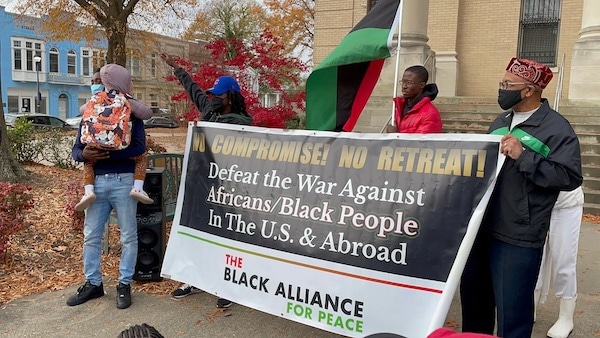 Dismantle NATO Now!
Rescind the $16B U.S. Allocations to the Ukraine War!
U.S. Imperialism is the Main Danger to Peace, Sovereignty, and Justice for Peoples all Over The World!

The ongoing crisis and war in Ukraine threatens to pull the world into a disastrous nuclear confrontation. Disinformation, lies, and propaganda from the U.S. and other western media are aimed at confusing millions of people inside the U.S. and around the world to view Russia as the aggressor, while hiding the U.S. role in the evolution of this conflict. One major example of this manipulation is that western media has not been honest about the massive role that the U.S. played in facilitating a 2014 coup in Ukraine that overthrew the country’s democratically elected president, and funneled support to neo-Nazi forces who were favorable to U.S./EU interests, helping them rise to power in Ukraine.

We, the undersigned organizations and individuals of the Black Liberation Movement and the various mass organizations and movements fighting for justice inside the U.S., call on all peace loving, Black, Brown, and Indigenous communities to condemn and oppose U.S. involvement in the Ukraine and across Europe through its various corporate and political interests and its military arm, The North Atlantic Treaty Organization (NATO).

We, Black people living in the United States, are a people of African descent oppressed inside the United States. We have been barred from the right to housing, to food, to medicine, to clean air, healthy environments, education and livable wages. Our grandmothers make difficult decisions monthly between keeping on the lights or being able to afford insulin. As 13% of the U.S. population, we face disproportionate levels of violent police repression and make up 40% of U.S. prisoners. Those corporate and elite ruling class forces in the U.S. who are making the policies to expand NATO across the 12,500 miles of Russia’s borders from Central Asia to Eastern Europe, including Ukraine, are the same ruling elites that maintain the oppressive policies inside the

U.S. that leave our communities in the racist economic and political peril we have suffered here for hundreds of years.

We further condemn the blatant hypocrisy of the U.S. government as a capitalist, imperialist, patriarchal predator power that has invaded and undermined numerous countries for regime change and other schemes, in order to control the politics, wealth, and natural resources of those nations. The United States is the strongest and largest imperialist power in the world and has repeatedly invaded other nations such as Grenada (1983); Afghanistan (2001); Iraq (2003); Libya (2011); and at least 21 others since 1945. The U.S. military arm on the African continent is known as AFRICOM, a force that breeds violence and instability in maintaining U.S. corporate interests across Africa.

In these imperialist wars, it is the Black, Brown, Indigenous, working and poor families who suffer the losses of dislocation, the deaths of loved ones, and other forms of agony. Black people in this country have fought in every U.S. war while our families and communities continue to suffer the ravages of hatred, discrimination, poverty, disease, and death. In the Ukraine conflict, racism is showing its ugly face in the denial of immigration rights to African and other non-white people’s seeking to escape the degradation and violence of this conflict, like all others living in Ukraine.

We join with Black and Brown people in other countries in Africa, Asia, the Caribbean, and Latin America who uphold the right of all nations to sovereignty and security, including Russia, who has historically been invaded by the forces of imperialism and fascism across its borders several times in the 20th century. The Russian people lost millions of lives to defeat fascism during WWII, fighting Hitler’s Nazi invasion of the USSR in 1941. This history of invasions of Russia also lies at the root of the Russian concerns about its security and the Ukraine/NATO expansion scheme that has provoked this war.

We call upon every community and organization fighting for justice and peace to adopt and sign this statement calling for the Dismantling of NATO, an end to U.S. Support of the War in Ukraine, and to Rescind the Billions of Dollars in military aid to Ukraine. Those military funds sent to Ukraine should be reallocated to the needs of people inside the U.S. for universal healthcare, universal childcare, affordable housing, education, liquidation of all student loan debt, minimum incomes and other human needs.