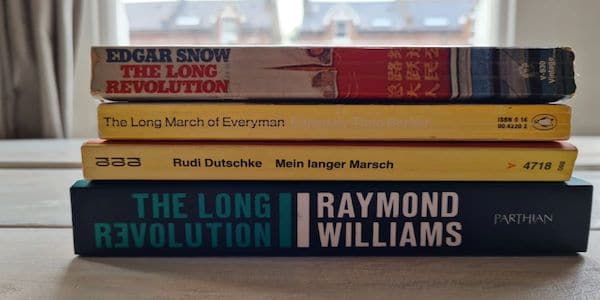 Red Pepper has launched a vital Crowdfunder to lay the foundations for our future. Donate today.

Few phrases have so sparked the imagination of the left–and the right for that matter–as ‘the long march through the institutions’ (‘der lange Marsch durch die Institutionen’). This is the much-(mis)quoted slogan of German sociologist and student radical Rudi Dutschke, first recorded in a 1967 conversation. Like its frequent companion, ‘in and against the state’, the statement was popular within Corbynism and beyond. Both succinctly describe an apparently peaceful, gradual means of engaging with the institutions of the state, and notably the Labour Party, whilst also transforming them.

Often, invocations of ‘the long march through the institutions’ have emphasised the adjective ‘long’, reminding us of the careful, drawn-out process of revolution (as against the suddenness of insurrection or election) in a manner reminiscent of Raymond Williams’ 1961 The Long Revolution. Williams, who interviewed Dutschke in 1971 as part of an ill-fated effort to complete his thesis at Cambridge, had drawn attention to the series of ongoing and interrelated revolutions–democratic, industrial, cultural, stretching back further than the nineteenth century and not completed by the mere seizure of power–to which his work would contribute. This theme was revisited in the 1971 BBC Radio 4 programme, The Long March of Everyman, in which Williams participated and which was later published as a source collection.

From Gramsci to Mao

The inspiration for ‘the long march through the institutions’ is often attributed to Antonio Gramsci, who also influenced Williams’ work as the 1970s rolled on. The slogan has been read as a restatement of Gramsci’s famous ‘war of position’, and as vulnerable to similar problems to those afflicting latter-day Gramscianism: electoral gradualism distracting its adherents from marching in the streets, or else implying a timescale which the urgency of the climate crisis has rendered unpromising.

However, Dutschke’s supposed Gramscianism is poorly evidenced. Whilst translations of the Prison Notebooks, Gramsci’s major theoretical testament, were available in French and German earlier than they were in English, he does not appear in the indices of either Dutschke’s biography, authored by his wife, or his published diaries (while Mao Zedong and Che Guevara appear a total of 10 and 15 times respectively, and Lukács 25). Whilst ‘the long march through the institutions’ might warrant comparison to Gramsci’s work, it did not require it.

Dutschke was chiefly inspired by non-European revolutionary struggles, as indicated by his planned doctoral thesis comparing Asian and European paths to socialism. With his Chilean comrade, Gaston Salvatore, he produced and introduced the German translation of Guevara’s Message to the Tricontinental: ‘Schaffen wir zwei, drei, viele Vietnam’. But if Dutschke’s arguments for ‘the long march through the institutions’ invoked a single figure, it was Mao. Mao’s advocacy of ‘protracted war’ and exploits in the original ‘Long March’–the 1934-35 military retreat from Jiangxi to Shaanxi, where the Chinese Communist Party and the Red Army recovered and reoriented itself to the rural areas–had been internationally celebrated, most notably in Edgar Snow’s 1937 Red Star Over China. This same book proved an early inspiration for Williams, who was rarely shy to acknowledge the influence of the Chinese revolution upon his own thinking. In fact, Snow’s final book, published in 1971, was to be titled The Long Revolution.

The meaning of the ‘long march’

The history of the ‘Long March’ is often mythologised, which must be challenged. Nevertheless, reexamining ‘the long march through the institutions’ and the ‘long revolution’ from the perspective of the original ‘Long March’–and acknowledging the profound influence on Dutschke and Williams of revolutionary processes in China, Cuba and Vietnam–may begin to reveal a path around the traps ensnaring latter-day Gramscianism.

Firstly, it is a reminder of Mao’s caution that the ‘long revolution’ cannot be an extended dinner party; ‘it cannot be so refined, so leisurely and gentle, so temperate, kind, courteous, restrained and magnanimous’. It is a reminder of the importance of the ‘short revolution’ which Williams acknowledged in his later writings, ‘the loss by the state of its capacity for predominant reproduction of the existing social relations’, contrasting with ‘the long march to the models’ which he observed in 1980s Britain). As Sabrina Huck has pointed out, Dutschke’s strategy was precisely not reformist, but revolutionary–‘its end goal is the abolition of the existing structures and the institutions that reproduce them’.

Secondly, it helps us to think about the length of the ‘Long March’ as spatial as much as (or more than) temporal. As Boris Buden noted, the retreat to Yan’an lasted little more than a year, but traversed perhaps 9,000km. This traversal of distance, another important theme of Williams’ work, was vital to the Chinese Communists not only in securing a place of refuge, but in translating their Marxism into the vernacular of rural struggles. We should look beyond marching into institutions which are already close to us.

The ‘Long March’ was not only an overcoming of distance–between urban and countryside, proletarian and peasant, party and masses–but, crucially, a creation of distance. This was not just the physical distance between the Chinese Communists and the enemy at their backs, but the political and social distance between the worlds of the past and the worlds that they were trying to make. It was not just a question of occupying the ‘base areas’, but of taking part in their liberation–‘the revolutionizing of revolutionaries’, as Dutschke explained, for his own part as interested in establishing Marcusean ‘counter-institutions’ as entering existing ones.

Finally, the example of the ‘Long March’ provides an apt analogy for the experience of making revolution, as defined by defeats and retreats as by glorious victories. The process of the ‘long revolution’ is neither a triumphant and linear climb to a peak, nor a leisurely stroll along the slopes of history. It is trudging out with a sense of our destination in mind, never forgetting the importance of placing one foot in front of the other, of knowing where our next step must fall, fully cognisant of our surroundings and of the sacrifices involved in coming this far. And it is doing so together.

Daniel Frost is a university worker based at the London School of Economics. Red Pepper’s new ‘Keywords’ regular, inspired by the work and legacy of Raymond Williams, explores the meaning of current political terms and the history and politics behind their use.