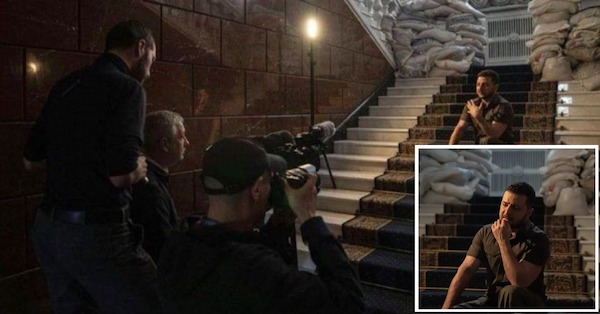 If you’ve got a gut feeling that your rulers are working to control your perception of the war in Ukraine, it is safe to trust that feeling.

If you feel like there’s been a concerted effort from the most powerful government and media institutions in the western world to manipulate your understanding of what’s going on with this war, it’s because that’s exactly what has been happening.

If you can’t recall ever seeing such intense mass media spin about a war before, it’s because you haven’t.

If you get the distinct impression that this may be the most aggressively perception-managed and psyop-intensive war in human history, it’s because it is.

If it looks like Silicon Valley platforms are controlling the content that people see to give them a perspective on this war that is wildly biased in favor of the US narrative, it’s because that is indeed the case.

If it seems like a suspicious coincidence that Russiagate manufactured mainstream consent for all the same shady agendas we’re seeing ramped up now like cold war brinkmanship against Moscow, internet censorship, and being constantly lied to by the mass media for the greater good, it’s because it is a mighty suspicious coincidence.

If it seems weird to you that so many self-styled leftists are responding to this war by fanatically supporting the extremely dangerous unipolarist geostrategic agendas of the most powerful empire that has ever existed, that’s because it is weird. Really, really, really weird.

If it seems a bit hypocritical to you that the empire is blasting us in the face all day with narratives alleging Russian war crimes while that same empire is imprisoning a journalist for exposing its war crimes, that’s because it absolutely is hypocritical.

If something looks wrong about the fact that we’re about to watch a judge sign off on Julian Assange’s extradition to the United States for practicing journalism while that same United States keeps pushing out narratives about the need to protect Ukraine’s freedom and democracy, that’s because it should.

If you’re beginning to get the nagging sense that the mainstream consensus worldview is a construct manufactured by the powerful, for the powerful and everything you were taught about your nation, your government and your world is a lie, that’s definitely a possibility worth considering.

If it’s starting to seem like we’re all being manipulated at mass scale to think, act and vote in a way which benefits a vast power structure that rules over us while hiding its true nature, I’d say that’s a thread worth pulling.

If you’ve a sneaking suspicion that the lies might go even deeper than that, right down to deceptions about who you fundamentally are and what this life is actually about, that suspicion is probably worth exploring.

If you’re feeling a bit like Keanu Reeves in the beginning of The Matrix right before the veil gets ripped away, I’d recommend following the white bunny and seeing how deep that rabbit hole goes.

If it has occurred to you that humanity needs to wake up from the matrix of illusion before our sociopathic rulers drive us to extinction via environmental catastrophe or nuclear armageddon, then your notes match my own.

If you believe it’s possible that these existential crises we’re fast approaching may be the catalyst we need to collectively rip the blindfold from our eyes and begin moving in a truth-based way upon this earth and creating a healthy world, then we are on the same page.

If there’s something in you that whispers there’s a good chance we make it despite the long odds we appear to be facing, I will tell you a secret: I hear it too.