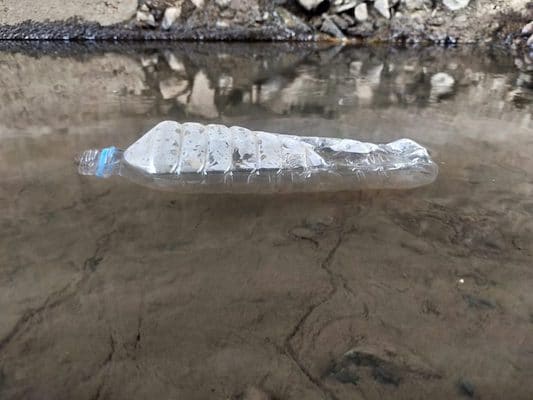 Mega corporations like Coca-Cola, Pepsi, and Danone are making around 494 times what they spend by bottling water in Mexico and selling it back to locals who have no choice but to buy it.

In Mexico and other poor countries and regions, companies are taking water from aquifers, springs, rivers, and lakes, and putting it in plastic bottles or turning it into flavored and sugary drinks, then dumping their used and dirty water back into water sources. That, along with other industrial pollution which is disproportionately disposed of into rural, Indigenous, and poorer communities, means locals are not able to drink tap water and end up paying extortionate prices to the European and US corporations.

In exchange for taking Mexico’s water, Mexicans give water bottling corporations US$66 billion a year. Coca Cola, Pepsi, Danone, Nestle, Bimbo, and other bottling and junk food companies extract over 133 billion liters of water, and then dump at least 119 billion liters of contaminated water back into water basins and aquifers.

Mexico is a dry country, and water is limited. But corporations are allowed to take as much water as they like, and there is little left over for small rural farmers and for domestic consumption.

I talked to Nahui, a leader of the United Peoples who are resisting Danone’s water brand, Bonafont’s ongoing robbery of their water in Puebla state. For her safety, she asked that just one name be used. We talked in the backyard of local person’s home. Chickens walked around us and birds chirped loudly in the trees above, but behind us the forty or so pear trees were totally empty of fruit. Bonafont’s extraction of water from the Indigenous Nahua region has caused local wells and water supplies to dry up.

“There is a lot of interest in territories where original peoples live because they are areas where people have habits and customs of looking after life, the rivers, the forests,” Nahui says. That, along with discrimination, makes such regions more attractive to companies, she argued.

The United Peoples brings together over 20 Nahua communities in the region. Early last year they closed down, then took over the local Bonafont bottling plant and converted it into a community center, but Mexican national and local security forces stood by the corporation and kicked them out of the plant last month.

I also spoke to Adriana Flores, a researcher with the Transdisciplinary University Center for Sustainability (CENTRUS) in Mexico City. “Coca Cola, Nestle, and some pharmaceuticals have been awarded access to whole aquifers, to millions of cubic meters of water, and that means when there are droughts, they don’t care. They’ll take the water. There are very unequal terms when accessing water. Those with the financial means are guaranteed water,” she said. Other people meanwhile, go without; 12 million people in Mexico don’t have access to a piped water supply.

The global bottled water market was worth US$230.4 billion in 2020, and the top beneficiaries are all US and European companies. Pepsi Co’s Aquifina brand tops the list, and is followed by Coca-Cola’s Dasani and Glaceau Smartwarter, Nestle’s Perrier, Danone (headquartered in France), Ozarka, and others.

To gain access to locals’ water, these companies use a range of devious methods. In the Nahua region, people in one town recently voted on whether the area would be governed by municipal or Indigenous law. All voting booth workers could be seen with Bonafont bottled water. To the south, in Chiapas, Coca Cola’s aggressive marketing includes usingIndigenous people’s homes as distribution points. The company also fought a legal battle in Oaxaca, as the state had prohibited the sale of single-use PET bottles, and in Toluca, it runs its biggest plant in the world. But the area faces extremely high water stress, and the 3 billion liters of water that Coca Cola takes only worsens that.

Meanwhile, corporations deliberately locate in poorer countries so they get away with polluting more. In Guadalajara, where there is a lot of heavy industry, Flores says the water “smells very bad, it tastes like metal … sometimes it makes my eyes burn.” Her team analyzed industries near two catchment areas, and found that milk processing plants, pharmaceuticals and more were dumping their waste directly into water sources, “without any monitoring, no transparency, environmental laws aren’t enforced.”

The Santiago river, also near an industrial zone, was covered in foam a meter and a half high. Activists and scientists blamed Swiss pharmaceutical, Ciba Geigy, now Novartis. There is no requirement in Mexico for companies to declare what contaminants they are discharging into water supplies or soil, and European companies that are banned from using lethal substances such as benzene or bisphenol in their home countries, don’t face that obstacle in Mexico.

But countries like Mexico don’t have lax environmental enforcement because they care less. Poorer nations have been pressured to accept polluting industries under the guise of “developing” their economies. Water exploitation licenses increased in Mexico by 3191% between 1995 and 2019 – a period that corresponds to the NAFTA agreement which completely opened Mexico up to US and Canadian companies and manufacturing, and barred Mexico from using environmental regulations against them.

“Free trade agreements allow companies to basically do whatever they want … Mexico is a fiscal paradise for them,” says Nahui, explaining that Bonafont has been able to steal water from Indigenous communities for decades thanks to “protection from the state.”

The US offshores its pollution, and is also one of the largest exporters of plastic waste, sending its trash to Canada, South Korea, Taiwan, China, Hong Kong, India, Indonesia, Malaysia, Mexico, Thailand, and more – though countries like Canada may also then re-export the waste.

In addition, poorer countries have fewer financial resources to monitor and punish corporate pollution, or to treat contaminated water. In Mexico, only 25 to 57% of wastewater is treated, and over half of the treatment plants are not in working order. Some 80% of water bodies are contaminated with industrial waste.

The number of water monitoring centers in Mexico has halved over the last few years, Flores says, due to budget reductions. Industry does “what it likes” because authorities are more interested in spending money on pro-business projects such as the so-called Maya Train, she argues.

And bottled water companies only take the pressure off governments to improve the water supply. Nestlé started selling Pure Life in Lahore, Pakistan, in 1998. Local experts say that back then, they could go anywhere and get clean tap water for free, but nowadays everyone is drinking bottled water.

While the resources that go into bottling water would be better used in treating tap water and preventing pollution, that is never the case. Instead, those countries that most consume bottled water do so because they have to, with the exception of many European countries who have faced strong marketing campaigns that portray bottled water as a healthy lifestyle choice. Top consumers of bottled water per capita include Mexico, Thailand, El Salvador, Indonesia, China, Brazil, Romania, Germany, the US, and India, while the countries with the worst water include India, Germany, Indonesia, Brazil, China, Thailand, and Mexico.

Safely managed drinking water is still very much a privilege of wealthier countries. Elsewhere, the lack of access to safe tap water only further exacerbates inequality. Poorer regions are more vulnerable in times of drought or crisis if there is little water availability. Treating illnesses as a result of contaminated water is harder for people in poor regions, and small farmers struggle to survive when water is limited.

“We have a certain amount of water available to us for food, energy, and production, and … the fact that the water bottling companies have quantities of water guaranteed to them, reduces the amount available to other users, to rural and Indigenous communities,” says Flores.

Animals are also affected. The environmental damage caused by bottled water is 1,400 times that of tap water, in terms of species loss.

Many charities take an individual approach to the water crisis in poorer regions. But the donations they are campaigning for won’t halt the abuse perpetrated by corporations.

A lot of charities and NGOs also have strong messaging about the damage caused by the plastic bottles. This messaging is accurate and useful, but it focuses on consumer choices and ignores the role of global power and economic inequalities. Some organizations even talk about “collaborating” with industry, though in reality companies like Danone do not engage with or listen to the communities they are affecting.

“We’ve been cut off from the possibility of deciding what happens to the water in the areas we live in. Instead of access to water being a human right, it is expensive and inaccessible,” Nahui says.

Tamara Pearson is a long time journalist based in Latin America, and author of The Butterfly Prison.