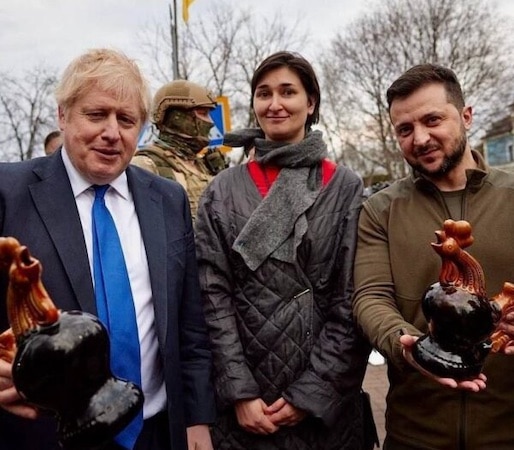 Russia is losing the war in Ukraine, Putin is becoming desperate, and, so the Western media narrative goes, the next event for the world to expect is the Kremlin launching a nuclear attack on Ukraine.

It won’t be with “normal” large strategic nuclear weapons, but rather with “low-yield” or tactical nukes – so we are prepped to expect.

The sinking of the Moskva warship on Thursday – described as the flagship of Russia’s Black Sea Fleet – is cited as a severe “blow” to Putin’s war effort in Ukraine.

How the ship went down is disputed.

Russia is saying it sank in stormy seas after being damaged by a fire on board from an ammunition explosion. Ukraine and the Pentagon are claiming the vessel was hit with two Neptune anti-ship missiles.

The next day, Ukrainian President Vladimir Zelensky gave a set-piece interview to American cable news network CNN in which he warned that Russia could attack his country with tactical nuclear weapons.

The cryptic language is bizarre. Zelensky told CNN’s Jake Tapper of his fear that Russia could use nukes:

Not only me – all of the world, all of the countries have to be worried because it can be not real information, but it can be truth.

It also seems strange that CNN should send its star anchorman to a war zone to conduct an exclusive interview in the comfort of the presidential office decked out with flags. A few weeks ago, Zelensky was supposedly hiding in secret underground bunkers between making hurried phone calls to international leaders and parliaments.

Zelensky claimed that Russia could use chemical weapons or nukes because Putin “does not value the lives of the people in Ukraine”.

Earlier this week, CIA director William Burns issued a pointed warning that Russia could resort to tactical nuclear weapons in Ukraine. Speaking on April 14, he said the assessed risk at that time was low. But Burns qualified the assessment by adding that if Russia became desperate then its decision to use nukes might change.

“Given the potential desperation of President Putin and the Russian leadership, given the setbacks that they’ve faced so far, militarily, none of us can take lightly the threat posed by a potential resort to tactical nuclear weapons or low-yield nuclear weapons,” Burns said.

The Western media narrative of Russia using nukes has been steadily building. When Putin ordered the military intervention to “demilitarize and denazify” Ukraine on February 24 he also put Russia’s nuclear forces on alert. That precautionary move given the wider context of NATO arming the Kiev regime was reported in Western media in hysterical terms that “Mad Vlad” was about to create mushroom clouds over Europe. It has since been mooted that Putin might gamble with nuclear saber-rattling in a manic bid to “escalate to deescalate”.

Then we had waves of “reporting” that Russia was planning to use chemical weapons. It was later admitted that the claim was disinformation released by U.S. intelligence which was avidly amplified by Western media. Zelensky seems now to be reverting to the chemical weapons scare in addition to nukes.

Importantly for the narrative to gain traction is the claim that Russia is losing the war in Ukraine.

Russian troops have pulled back from the capital Kiev to concentrate their combat efforts to defeat the main Ukrainian battle groups in the east of the country. Moscow says its top objective is to secure the breakaway Donetsk and Lugansk republics whose mainly Russian-speaking people have endured eight years of war by the NATO-backed Kiev regime.

Western media have portrayed Russia’s strategy as a ragged retreat and setback for Putin who, we are also “informed”, is being misled by his cowering, sycophantic military generals.

However, independent military analysts like former U.S. Marine Corps officer Scott Ritter dismiss the “setback” talk, asserting that Russian forces have all but defeated the Ukrainian side and are preparing a devastating “cauldron” to wipe out the Nazi Azov Battalion remnants in the eastern Donbass region. The capture of the port city of Mariupol this week is indicative of the Russian strategic success. The sacking of Kiev was never stated as a Russian goal.

U.S. President Joe Biden and the NATO alliance are under intense pressure to intervene directly in Ukraine. Biden since taking office has already ordered $3 billion worth of weaponry to “defend Ukraine from Russian aggression”. But Biden and the NATO leadership in Brussels are so far balking at any direct involvement, fearing that it could spiral into World War Three. Sleepy Joe, he may be, but sleeping walking into Armageddon is too much of a wake-up.

The Kiev regime and its media-savvy actor-turned-president Zelensky, who operates like a method-acting CIA asset, are relentless in pressuring the United States and NATO to go to war against Russia. In that call, Zelensky is boosted by the Russophobic governments of Poland and the Baltic states of Lithuania, Latvia and Estonia. These minor NATO states are gung-ho to send warplanes and missiles. Tails are trying to wag the dogs.

Biden is no doubt wary of the catastrophic danger, but there seems to be a faction within the U.S. military-intelligence apparatus that is contemplating a war with Russia. The potential profits for Lockheed Martin and Co are irresistibly seductive beyond reason. American capitalism also needs to avert the social meltdown underway from record poverty and class tensions.

The false-flag provocations of alleged atrocities by Russia in Ukraine are crescendoing. Allegations of bombing hospitals, theaters, and railway stations (which have been debunked) are admixed with the reported horrors of executing civilians and throwing their bodies into mass graves. Russian troops are accused of all sorts of depravities, raping grandmothers and children.

Zelensky tells CNN that Putin doesn’t care about Ukrainian lives. The subhuman image of Russia and its leader builds and builds.

Meanwhile, CNN and other Western media airbrush out the Nazi conduct of the Ukrainian military, the torture and execution of captured Russian soldiers, the indiscriminate shelling of civilians in the Donbass, not to mention the credible claims that NATO-backed Ukrainian forces carried out the atrocities in Bucha and Kramatorsk for the purpose of incriminating Russia.

Biden has felt the “emotional pressure” to condemn Russia for war crimes and genocide. He is sending more weapons this week.

But so far, the false flags that the Ukrainian regime and its Western handlers have pulled off have not quite provoked full war – yet. The ultimate false flag being set up is the sensational reporting that “Putin dropped a nuke in Ukraine”.

The key thing about a low-yield 8-kiloton nuclear attack, as opposed to bigger bombs of the Hiroshima variety (that the Americans stand out as the only ones to have actually ever used), is the former can be feigned as coming from Russia. Such a device could be man-portable, a so-called suitcase bomb. The U.S. is reckoned to have 100 such tactical nukes in Europe. If one is not actually used, the reporting of “extremely loud, unknown explosions” by the dutiful Western media can be made to appear like the dreaded result. As Zelensky told CNN… “because it can be not real information, but it can be truth.”