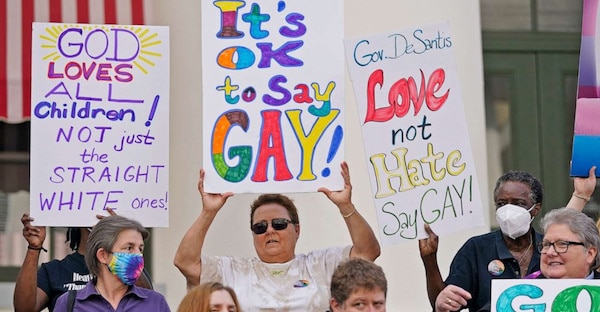 Last month, Florida Gov. Ron DeSantis signed a “Parental Rights” bill to restrict some instruction in schools that pertains to sexual orientation and gender identity. Three polls have been conducted purporting to measure the public’s reaction to the bill, but they produce the illusion of public opinion rather than reality.

The bill itself is a complicated piece of legislation, which—according to the preamble and the legislation itself—is intended:

Polls on the Florida law

As of this writing, at least three polls have been conducted to measure national public opinion about this Florida law: ABC News/Ipsos (3/13/22), Public Opinion Strategies as reported in the Wall Street Journal (4/1/22), and Yahoo/YouGov (4/6/22).

As the graph below illustrates, the results have hardly been consistent. 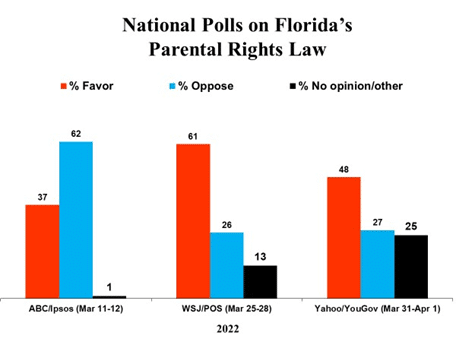 It’s worthwhile noting that in each case, the poll is not measuring what might be called “pre-existing” opinion about the actual Florida law, but some version of respondents’ reactions after being exposed to only a portion of the law’s provisions.

If pollsters had wanted to measure what the public is actually thinking at the time of the poll, they would not have given respondents any information to taint their sample.

Here is one objective method to discover public opinion on the issue:

1. “Have you heard about the recent law in Florida that deals with classroom instruction on gender issues, or have you not heard about it?”

b. No [Terminate interview: Don’t ask subsequent question on whether they favor or oppose law]

2. [Respondents who answer “yes” are then asked:] “Do you favor or oppose that law, or are you unsure?”

3. [If favor or oppose] “Do you feel that strongly or not strongly?”

I suspect that such an approach would show that few people had actually formed any opinion about the Florida law. The level of political knowledge among US adults is generally quite low. The percentage of people who had followed politics in Florida to know about the law, even as covered in the national media, would probably not exceed about 30%—and could be considerably lower than that. 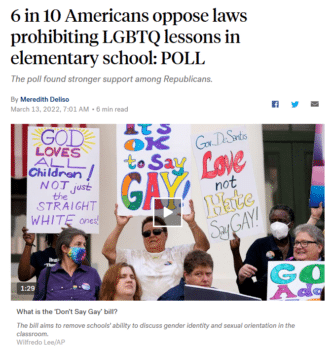 To overcome widespread public ignorance, pollsters adopt strategies that do not necessarily measure public opinion on a given issue, but give the appearance of doing so.

In this case, apparently each polling group assumed that most people simply didn’t know much about the Florida law. So each pollster designed a question that would provide respondents something to hang their opinion hats on.

On another topic, would you support or oppose legislation that would prohibit classroom lessons about sexual orientation or gender identity in elementary school?

The poll reported in the Wall Street Journal  included the following paragraph taken from the legislation, and then asked whether respondents supported or opposed the legislation:

Classroom instruction by school personnel or third parties on sexual orientation or gender identity may not occur in Kindergarten through third grade or in a manner that is not age appropriate or developmentally appropriate for students in accordance with state standards.

for teachers or other school personnel to discuss gender identity when teaching children in kindergarten through grade three?

The point of the questions was to make sure that all respondents had some information they could use to come up with an opinion. Note, however, that all three questions ignored much of what the law actually contained, giving respondents instead a brief summary of one part of the bill. 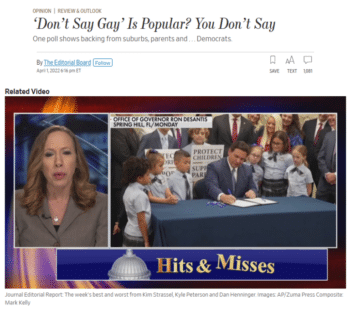 Still, that did not prevent the pollsters or journalists from linking their results to the bill in Florida. ABC News (3/13/22) reported:

The results show lopsided disapproval for laws like the one that recently passed in Florida that limits what elementary school classrooms can teach about sexual orientation and gender identity.

When Americans are presented with the actual language of the new Florida law, it wins support by more than a two-to-one margin.

The Yahoo News story (4/6/22) opened with a statement that linked its results directly to opinion about the Florida law:

The story went on several times to talk about the public’s support and opposition to “the law.”

Just to be clear: None of the polls actually described the whole bill to their respondents. People in the sample who hadn’t heard of the bill would be aware of only one small part when responding to the question about their support or opposition. 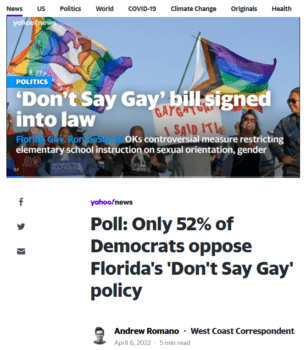 …and Yahoo News (4/6/22) also found the public mostly supportive, but by a narrower margin.

One of the key differences in the way each pollster measured respondents’ reactions appears to be whether the question specified that sexual orientation or gender identity was to be banned “in grades kindergarten through grade three.” ABC News did not mention the limit and found majority opposition. The other two polls did mention the limit and found net support. (Note that the actual law restricts discussion of sexuality and gender identity up through 12th grade.)

As for the difference between the POS poll reported by the Wall Street Journal (35-point favorable margin) and the Yahoo poll (21-point margin)—it apparently comes down to how much the pollsters pressed respondents for an opinion. Both polls show about a quarter of their respondents in opposition (26% and 27% respectively). Yahoo, however, reports 25% with no opinion, compared with POS’s 13%. The 12-point difference is just about the margin between the two polls in the “favor” category. Apparently when pressed, respondents were more likely to be positive than negative about the law.

Often pollsters will press respondents to come up with an opinion, to make it appear that the public is mostly engaged. Some pollsters do that more than others, with noticeable differences as to what is reported as public opinion. Note that ABC News shows 99% of their respondents with an opinion, compared with 75% by the Yahoo/YouGov poll.

What did polls actually measure?

While the three polls did not reveal how many Americans had actually formed an opinion about the Florida law, the polls did provide some insightful message testing. How best to position this new law? Answer: Emphasize the restrictions on teaching about sexual orientation or gender identity in kindergarten through the third grade. That apparently sounds reasonable to most people.

And, indeed, that’s how DeSantis defended the bill:

When you actually look at the bill and it says “no sexual instruction to kids pre-K through three,” how many parents want their kids to have transgenderism or something injected into classroom instruction? It’s basically saying for our younger students, do you really want them being taught about sex?

Of course, there is much more to the bill, and much more message testing that could be done about it—such as questions about restricting discussions of sexual matters all the way through high school; giving parents the go-ahead to sue the school districts if they feel the law is being violated; having the schools reimburse parents for attorney’s fees and court costs, and requiring the school districts also to pay damages, if the parents prevail in court; and allowing students’ privacy to be violated if they confide in school counselors about their sexual orientation or gender identity.

Message testing about individual elements of a law, however, is not the same as public opinion about the law. At best, message testing provides a hypothetical opinion; it tells pollsters what the public might think if every adult in the US were given the exact same information as the respondents. In real life, people learn about laws in many different ways. Hypothetical opinion is not real opinion.

The contradictory results of the three polls are evidence that they are not measuring the same thing. They are measuring different ways of talking about sex education in schools.

The three polls—and news reports about them—don’t tell us that’s what they’re doing. Instead, they create the illusion of public opinion, which obscures actual widespread ignorance/public disengagement.

Such polls do not serve democracy well.

David Moore is a senior fellow with the Carsey School at the University of New Hampshire, and a two-time winner of the EPPY (Editors and Publishers) Award for his writing on iMediaEthics. He is a former managing editor of the Gallup Poll, and author of The Opinion Makers: An Insider Exposes the Truth Behind the Polls.