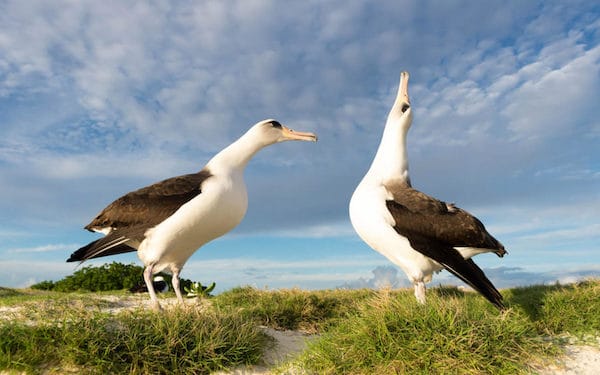 Albatross, famous migratory bird, is also a love bird. It is known for being monogamous, forming long-term bond with one partner that is rarely broken. Mated pairs never split up until one bird dies.

The UN Security Council held an extraordinary event on April 6 under the rubric Arria Formula Meeting on Biological Security regarding the biological activities in countries including Ukraine. Predictably, the U.S. and UK representatives didn’t show up at the event and the western media also blacked out the proceedings. But that does not detract from the profound significance of what transpired.

The highlight of the Security Council proceedings lasting over two hours was the disclosure by General Igor Kirillov, chief of the Radiation, Chemical and Biological Defense Forces of the Russian Armed Forces, that Washington is creating biological laboratories in different countries and connecting them to a unified system.

He said the U.S. has spent more than $5 billion on military biological programs since 2005 and detailed that in territories bordering Russia and China alone, about 60 facilities have been modernised during this period. The Ukrainian network of laboratories is designed to conduct research and monitor the biological situation consisting of 30 facilities in 14 populated locations.

Highly sensitive materials from the Ukrainian biological laboratories were exported to the U.S. in early February just before the Russian special operation began, and the rest were ordered to be destroyed lest they fell into Russian hands. But the cover-up was only partially successful. Indeed, Russia is in possession of highly incriminating evidence.

Previously also, Russia had released a number of documents related to the biological military activities of the Pentagon, which pointed toward a worldwide project to set up biological laboratories in rival countries with the goal of developing targeted viral weapons against those countries.

The proceedings of the Security Council conference on April 6 are in the public domain and are accessible. See the video below:

Russia has made specific allegations, pointing finger at:

However, the U.S. has so far point-blank refused to accept any supervision and verification of such incriminatory evidences and has stonewalled the demand for a verification mechanism. It is unlikely that the U.S. will permit an international verification process that holds the potential to expose it as indulging in crimes against humanity–although there are appropriate frameworks in place including the Biological Weapons Convention (BWC) and the UN, to hear the clarifications from the relevant country in a fair and impartial manner.

A mind-boggling “discovery” that Russian forces in Ukraine stumbled upon is the use of numbered birds by the Pentagon-funded labs. This almost falls out of science fiction and Sir Alfred Hitchcock could have made an epic movie out of it where deception mixes with innocence and man’s cruelty to nature becomes unbearably grotesque. The project works like this:

To begin with, the Pentagon accesses the scientific data available with environmental specialists and zoologists after studying the migration of birds and observing them throughout the seasons, relating to the path these birds take each year on their seasonal journey from one country to another and even from one continent to another.

On the basis of this data, groups of migratory birds are caught, digitised and capsules of germs are attached to them that carry a chip to be controlled through computers.They birds are then released to the flock of the migratory birds in those target countries toward which the U.S. intelligence has malevolent intentions.

During the long flight of the birds that have been digitised in the Pentagon bio-labs, their movement is monitored step by step by means of satellites and the exact locations are determined.The idea is that if the Biden Administration (or the CIA) has a requirement to inflict harm on, say, Russia or China (or India for that matter), the chip is destroyed when the bird is in their skies.

Plainly put, kill the bird carrying the epidemic. Sadly, my mind goes back to the novel by the American author Harper Lee To Kill a Mocking Bird, the haunting story of innocence destroyed by evil.

To return to reality, once the “digitised” bird is killed and the capsule of germs it carries is released, the disease spreads in the “X” or “Y” country. It becomes a highly cost-effective method of harming an enemy country without any need of war or coup d’état or colour revolution.

The Russians have made the shocking claim that they are actually in possession of such migratory birds digitised in the Pentagon’s bio-labs.

International law expressly forbids the numbering of migratory birds because they freely criss-cross the blue sky and air of other countries.By supplying them with germs, these birds become weapons of mass destruction. What human ingenuity! But the U.S. enjoys total immunity from international law.

The bottom line is that only the U.S. intelligence—and President Biden, perhaps, if he remembers—would know where all humans have been infected so far in this century by the Birds of Mass Destruction. Was Ebola that devastated Africa a test case and precursor of things to come?

What about COVID-19, which is known to have originated from funded laboratories that were administered by the U.S.? It is very likely that the U.S. might have used migratory birds to kill Chinese citizens. Clearly, the U.S. in its desperation to reverse its global decline is pulling out all the stops to restore its hegemony in a world order that is inexorably moving toward multipolarity.