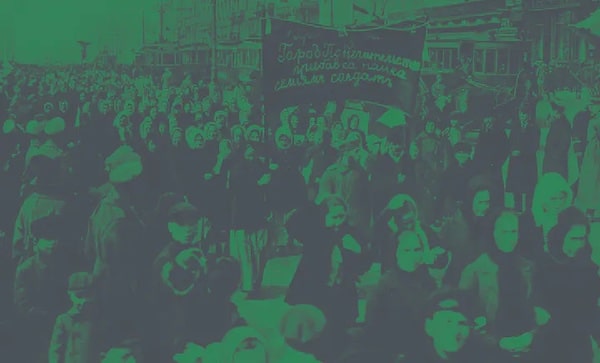 In October 1917, revolutionary Russian workers, supported by millions of peasants and soldiers, succeeded in overthrowing capitalist rule and replacing it with their own democratic structures of power. Exploited masses have risen up in rebellion throughout history. But in Russia, for the first time, they actually took control of society, created a government based on democratic workers’ soviets (councils) and, at least temporarily, routed the capitalist state.

They immediately set about pulling Russia out of the slaughter of World War I, liberating the oppressed nationalities under the Russian empire, implementing workers’ control of production, distributing land to the peasants and scrapping sexist laws and customs. The workers’ success inspired a wave of revolutions elsewhere.

But this victory was far from inevitable. The revolutionary Bolshevik Party was the only party that argued for workers to take power. By October 1917 it had around 250,000 members and had won significant support beyond its ranks. But just six months earlier, it was supported by only a small minority.

The two other left-wing parties vying for the allegiance of the working class, the Mensheviks and the Social Revolutionaries, opposed the workers seizing power. They argued for moderation, patience and above all for the working class to subordinate itself to Russia’s capitalists and the Provisional Government that ruled in their interests. Had these forces not been defeated, workers’ power in Russia would not have been achieved.

The existence of a sizeable revolutionary party in Russia, the Bolsheviks, was crucial to the revolution’s success. And such a party existed as a result of important debates that were had well before the revolution. The willingness of the Bolsheviks to split from the conservative arm of their movement years in advance meant that, when the decisive moment came, they were able to mobilise a layer of workers who could understand the political debates, combat the influence of the reformists and liberals, and fight for a revolutionary strategy.

In the nineteenth century, much of Europe was undergoing industrialisation, which brought with it the rapid expansion of the urban working class, the development of a mass workers’ movement and the spread of socialist ideas. Russia, however, lagged behind. By 1900, around 85 percent of the population still lived in the countryside and depended on agriculture for their livelihoods. Serfdom had been abolished only in 1861, and the country was still ruled by the tsarist autocracy.

Marxist ideas were pioneered in Russia from the 1880s onwards, initially by tiny handfuls of persecuted, often exiled, intellectuals. Although the Russian working class was still only a small minority of the population, by the 1890s, industry was growing rapidly. Soon, masses of textile workers and metalworkers in huge factories, with appalling conditions, started striking and organising, and the influence of Marxism began to spread.

In about 1895, Vladimir Lenin and others founded the Saint Petersburg League of Struggle for the Emancipation of the Working Class. Lenin was soon arrested and imprisoned for his efforts. While in prison, an impressive textile workers’ strike that the League had helped to organise took place in 1896. Lenin is said to have smuggled out a manifesto for the strike, written using milk and an inkwell made of bread, which he could swallow when the prison guards came around. “Today, I have eaten six inkpots”, said one of his letters.

This summed up the state of the socialist movement at the time. Under conditions of severe repression, a multitude of tiny, atomised Marxist circles of middle-class intellectuals, students and workers proliferated, but were constantly broken up by arrests and exile. The fate of the first congress of the Russian Social Democratic Labour Party, in 1898, was typical—it brought together just nine delegates, five of whom were arrested within a month.

Moreover, there were divergent views on the way forward for Russian socialism. For example, the socialist manifesto at the 1898 congress was written by an intellectual called Peter Struve. He was one of those Russian “Marxists” against whom Lenin would soon be polemicising as really just a bourgeois liberal who liked to employ some Marxist verbiage. Struve’s version of “Marxism” had very little to do with workers’ revolution and socialism, and mainly emphasised that the development of capitalism was both inevitable and progressive.

Later in life, Struve explained, “Socialism, to tell the truth, never aroused the slightest emotion in me, still less attraction”. Not exactly the person you want writing your socialist manifesto! Struve would soon become a leading advocate of the interwoven currents known as Legal Marxism, Economism and Revisionism, all of which found a political home in the Mensheviks. What were these currents?

Essentially, they were the compromising right wing of the socialist movement. They were influenced by the arguments of Eduard Bernstein in the German Social Democratic Party, who at this time was “revising” Marxism to argue for a parliamentary road to socialism instead of class struggle and revolution. In Russia, there was no parliament, just tsarism, so Russian reformism took different forms—some constrained themselves to the very limited publishing activities and ideas legally allowed by the tsar (hence “Legal Marxism”). This overlapped with Economism, which was about limiting the kinds of demands and arguments socialists put to workers, in particular the demand to overthrow tsarism. This became theorised and justified by the Economists, who said that workers were really interested only in bread and butter demands anyway, not deeper theoretical and political questions.

The effect of all this was to shift the socialist movement to the right, to neglect any serious attempt to win workers to revolutionary politics and instead to leave the working class under the sway of Russian liberalism, i.e., the supposedly “progressive” industrialists, bankers and landlords. Following this to its logical conclusion, Struve soon went on to formally abandon Marxism and co-found the party of the liberal bourgeoisie, the Kadets, in 1905.

This question, about the role of the capitalists in the coming struggle against tsarism and the consequent tasks of the working class, would end up being central to a split in the Russian Social Democratic Labour Party.

The second congress of the party, held in 1903, came after years of organising efforts and political arguments on the part of Lenin and many other leading Marxists. A re-formed Russian Social Democratic Labour Party, on a more solid footing, was the result.

But the congress also gave rise to a new split, with the party dividing into two factions, the Bolsheviks (meaning majority) and Mensheviks (minority). At the time, the issues at stake were not totally clear, and it was the Mensheviks, not Lenin and the Bolsheviks, who drove the split by refusing to accept the democratic decisions of the congress. It was around this time that many of the myths about the supposedly authoritarian Lenin were invented, by Mensheviks who were bitter about being in a minority. The underlying issue that precipitated the split was to do with the nature of the coming revolution in Russia and the role of the working class in it.

Many of the features associated with modern capitalism in the rest of Europe did not exist in backward Russia. In particular, while the capitalist class was firmly in control of the state apparatus in most European countries, in Russia they had to deal with the anachronism of tsarism, in which official political power still resided in an all-powerful monarchy, the interests of which didn’t always align exactly with the capitalists’ own. This desire for a more modern, efficient state that could better facilitate capitalist development led to oppositional, liberal currents in the Russian bourgeoisie and among their hangers-on in the middle-class intelligentsia.

This in turn led some socialists to argue that the Russian capitalists were a progressive force, and that they were destined to lead a revolution against tsarism as their French counterparts had done in the French Revolution of 1789. In addition, they argued, Russia was not ready for socialism, and a long period of capitalist development would be required first. Therefore, the role of the working class was to ally with the bourgeoisie, to push them forward where necessary, but to remain subordinate to their leadership.

As a leading Menshevik, Axelrod, put it, “Our attitude to the liberal bourgeoisie is defined by the task of imbuing it with more courage”. Furthermore, the working class would “be falling into a fateful blunder” if it pushed too hard to assert its demands independently of these bourgeois liberals, since it would cause them to “recoil” from the struggle and force them into the camp of reaction and tsarism.

Lenin and the Bolsheviks had a very different approach. Russia’s capitalists, they pointed out, were tied to tsarism by a thousand threads, and utterly dependent on it. Above all, they would much prefer to stick with the tsar rather than risk unleashing a popular struggle of workers and peasants that would threaten their profits and their control over the factories and the land. The situation was very different from the French Revolution, when the working class was so underdeveloped that the capitalists had less to fear from unleashing popular uprisings in the course of toppling the monarchy. In Russia, when push came to shove, the capitalists would side with the tsar. The days of the capitalists playing any progressive role were long gone (as Marx had argued as early as 1848). Therefore, the struggle against tsarism had to be led by the working class, against the capitalists, not with them. The workers would find allies in the struggle, but these would not be the treacherous bourgeois liberals, who after all depended for their profits on exploiting the workers, but would come from among the millions of oppressed peasants yearning for land and freedom.

This fundamental split defined the struggle between the Bolsheviks and Mensheviks right up until the revolution in 1917. The Menshevik position led them repeatedly to adopt a craven approach to Russia’s capitalists and their chief liberal representatives in the Kadet party. When Russia’s capitalists whipped up nationalist hysteria and cheered on the Russian empire in World War I, profiting from the slaughter while workers and peasants died and starved in their millions, the Mensheviks prevaricated while the Bolsheviks mounted a strident anti-war campaign.

After the tsar was toppled by a worker and soldier rebellion in February 1917, the Mensheviks sought to hold the working class back, arguing that the soviets, which had sprung up all over Russia as the democratic organising bodies of people power, should remain a loyal and subordinate pressure group to the capitalist, unelected Provisional Government.

The revolution demanded “Peace, land and bread”. The Mensheviks and Social Revolutionaries claimed to support these demands, but opposed the only means of obtaining them, the overthrow of capitalism. And so, desperate to maintain their alliance with their bourgeois allies, they ended up supporting the war, opposing strikes and land seizures, restoring the control of the tsarist generals over the rebellious soldiers, repressing the Bolsheviks, disempowering the soviets and eventually joining in government alongside the capitalists. Kerensky, the Social Revolutionaries leader and head of the Provisional Government by September 1917, even plotted a military coup with tsarist General Kornilov to crush the revolution once and for all.

The behaviour of Russia’s liberals and reformists was not an anomaly. It had happened before, and has been repeated throughout the century since. Capitalism is the cause of war, inequality, poverty, oppression and misery. Those who imagine they can oppose these things without overthrowing the system itself end up adapting to that system, absorbing its logic and becoming its lackeys.