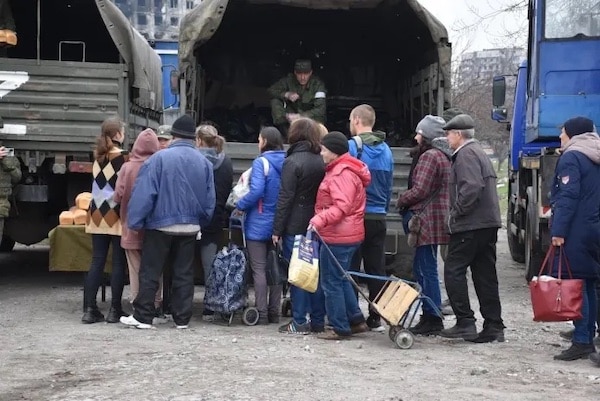 [This article is written by a reporter embedded in Ukraine with the Russian army. We believe that if people want to understand the war in Ukraine, they need to read widely about it, from different perspectives, including the Russian one, to try and discern the truth about what is going on for themselves.—Editors] 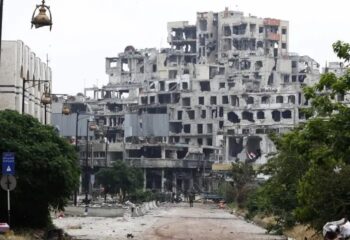 Where shall I begin

Mariupol has been wiped out, buildings have collapsed mostly due to rocket attacks and, of course, there have been bombings as well.

The Western media, of course, blame the Russians for these bombings, but Ukraine also has planes that drop bombs, so how on earth can you say a few thousand kilometers away that it is the Russians? 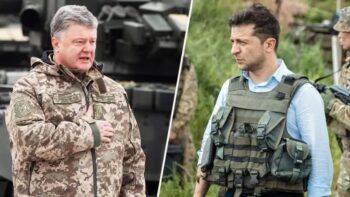 It is not like in the West where, when there was a terrorist attack, the perpetrators left their passports or IDs.

This is a war of destruction that I have seen before—in Syria, in Homs. Perhaps also like in Dresden, toward the end of World War II, although, of course, Dresden I cannot verify.

The West has turned it into a propaganda war. All the while it sponsors the Ukrainian army and its neo-Nazi battalions.

For years the media ignored the Ukrainian army assaults on the people of Eastern Ukraine, who were forced to survive in underground bunkers.

They act as if the war started in February, when it actually started in 2014 as a war by the Ukrainian government against its own people. 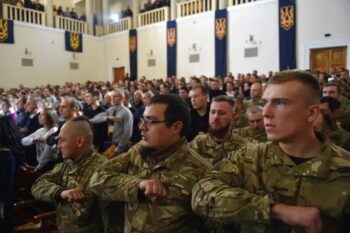 Azov Battalion at ceremony in Kyiv in October 2018. [Photo: foreignpolicy.com]

Eight years of destroyed villages and towns—why? Because eastern Ukraine is inhabited by a predominantly Russian-speaking population, who grew up in the Soviet system.

After the 2014 Maidan coup backed by the U.S., they were supposed to become part of the EU and the pro-European “puppet” government in Kyiv. All their values, norms, culture and language had to be thrown overboard.

In order to achieve these ends, first President Petro Poroshenko and then Volodymyr Zelensky, have carried out “special operations” which they called “fighting terrorists.”

The Ukrainians started bombing the Donetsk airport and then carried out attacks on the civilian population.

When this did not go as planned, they recruited and made the Azov Battalion and other right-wing groups part of the regular army.

These battalions are indeed neo-Nazis, from father to son they are indoctrinated with the Nazi ideology of the Stepan Bandera cult.

You can compare them to jihadists of ISIS (DAESH), ideologically indoctrinated and fighting on speed or other drugs so, as many witnesses say, they kill civilians randomly. 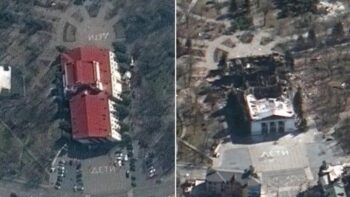 This is exactly the same script that happened in Syria, where jihadists even cut out the hearts of the Syrian Army soldiers and hung their chopped heads on poles.

On March 16, 2022, the Donetsk Regional Drama Theater in Mariupol, Ukraine, was allegedly bombed. It was reportedly used as an air raid shelter during the siege of Mariupol, allegedly holding 1,300 civilians in the days before March 16, and at least 300 victims might have been killed.

So, again, the Western media appear to be lying—blaming Russia for every atrocity in the war without proof, while failing to give any context for how the war started and who is responsible.

The goal is clearly to mobilize public opinion against Russia in support of regime change or even a full-scale war against them.

I was given a completely different story about the Mariupol theater “bombing” from a Russian army spokesman whom I interviewed. He said the following:

According to eyewitnesses, there were about 300 people in the theater, but this cannot be verified, the Ukrainian army and battalions did not keep records of the attendance, so it could be more or less people. The cellars were used as bomb shelters for rocket attacks and bombs. On the day of the destruction, March 16, 2022, according to eyewitnesses, there were no bombings, but heavy rocket attacks. Ammunition and explosives from the Ukrainian army and its battalions were stored in the cellars. The Ukrainian army and battalions heard that the Russians were coming and detonated the explosives in the shelters, where many people still took refuge from the ongoing fighting. This is not new for the Ukrainians to perform such deeds, especially the AZOV battalion, who, just like in Syria at the time of the war, the jihadists were high on drugs, Captagon and speed, which explains their brutality and violent reaction. Same as for these neo-Nazi fighters who are highly infiltrated in the Ukrainian army. 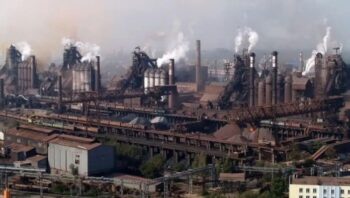 The media in the West, in conjunction with politicians, sell stories to the public, at least half of which I dare to say are fabricated or used from other conflicts.

Mariupol is destroyed and most likely more than half of its inhabitants fled the city, either to the West, to Russia or surrounding villages and towns. Nobody knows at the moment. People are afraid and searching for their relatives, who might have been killed.

As I said earlier, food and water and other humanitarian help is distributed on a daily basis by the Russian army—every day in a different place because, when the Ukrainian army and its Nazi battalions know the place, they will try to shell it and kill the people. 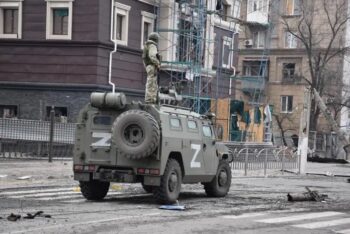 Inside the city near the theater. [Photo: Sonja van den Ende]

It will take a while before the city can be rebuilt. The Azov steel factory is the last stronghold of the Azov Battalion. The Russian army, as of this writing, is fighting a heavy battle there whose outcome seems foreordained.

Everyone is anxiously waiting to see if the NATO command center, which is most likely under the factory, is being dismantled. Whether a biological (one of many) laboratory is really located under the Azov steel factory, we will soon see. I will definitely report on it again.

Sonja Van den Ende is a freelance journalist from the Netherlands who has written about Syria, the Middle East, and Russia among other topics.