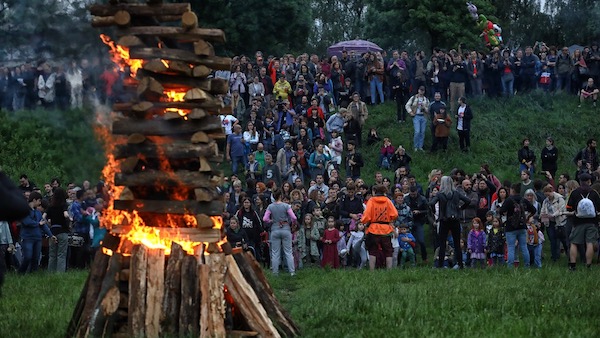 Hundreds of people met near Freedom Bridge on the northern bank of the Sava river in Zagreb on May 7 to mark the 77th anniversary of the city’s liberation from the Nazi-allied Ustaša regime. On May 8, 1945, Partisan units crossed the river on the same spot, finally ousting the fascist administration responsible for more than 30,000 deaths over the course of the 4-year occupation.

The commemoration was organized by the Network of Antifascist Women (MAZ), which for the past seven years has tried to rebuild remembrance of Zagreb’s contribution to the Resistance and defiance in the face of the Ustasha.

“We must not forget that liberation did not fall from the sky, nor was it pushed by some external military force. We owe it to a whole generation of ordinary masses who defied the quantitatively superior occupier and domestic traitors until it defeated them. The women and men of Zagreb, although under brutal repression by the police and on the brink of extinction, selflessly maintained the National Liberation Movement in the city and at the same time supplied and filled the ranks of partisan units in Žumberak, Kalnik and Moslavina,” stated MAZ in their public announcement of the commemoration.

During the 1970s and 1980s, the city’s liberation was marked by the lighting of bonfires on the spot where the Partisan units entered the city. The tradition came to a stop after the breakup of Yugoslavia, as the new regime in Croatia was eager to erase all reminders of the republic’s anti-fascist, socialist past. However, this trend is now increasingly encountering resistance, especially among young activists.

Conscious of the many implications of a new strengthening of right-wing groups and narratives in Croatia, MAZ uses the space provided by the Day of Liberation of Zagreb to highlight the importance of joining forces to defy them. This year, the commemoration program included workshops by feminist and LGBTIQ group, climate justice activists, as well as cultural networks and choirs.

For the first time since the bonfires were revitalized, the commemoration was attended by representatives of the city administration. Recently elected mayor Tomislav Tomašević (Možemo) gave a speech in which he noted that the units that liberated Zagreb did so on the wings of social justice, faith in equality and internationalism, values that the people of Zagreb should continue to hold on today in the face of new crises.

“Fascism has not disappeared. We find it in the inhumane and unjust capitalist system which, year after year, ruthlessly deepens social inequalities. Because of this, workers feed their households with less than 4000 kuna (approx. USD 560) per month, senior citizens are forced to scavenge secondary raw materials in between pension payments, and students do two jobs in addition to studying to support themselves and their families,” said the organizers.

Even in this situation, the ruling elites are not backing from the road taken, announcing a new economic crisis that will bring new increases in energy costs and basic food prices. Like in other countries of the EU, the effects of the EU’s approach to the war in Ukraine and the impending economic crisis will have the strongest impact on workers. In absence of a strong alternative coming from the left, this is likely to open new grounds for right-wing movements and push Europe towards a very dark period of its history.

“Today, we stand here to say that the society in which we want to live in is based on political, social and economic equality, as well as solidarity with all. Our coordination and unity are the first and decisive steps on that path. As we light this year’s bonfires, we show gratitude to our predecessors who fought so we could stand free in this place today. We owe it to them, and to ourselves, to gather every year on Liberation Day and say loudly: Death to fascism–freedom to the people!” concluded MAZ declaration.