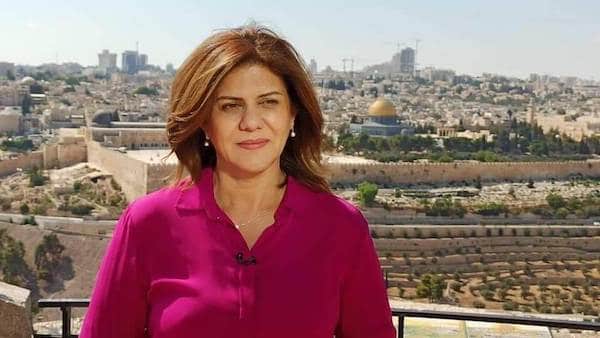 Israeli forces shot and killed Palestinian journalist and veteran Al Jazeera correspondent Shireen Abu Akleh in the head today while she was covering an Israeli raid on the Jenin Refugee Camp.

Abu Akleh and a group of other journalists, who were wearing blue flak jackets and helmets marked as ‘PRESS’, were stationed near an entrance to Jenin refugee camp when they came under fire from Israeli forces.

Abu Akleh was shot in the head, in an exposed area below her ear, killing her instantly. Another Palestinian journalist, Ali Samoudi, was shot in the back. He was treated at a local hospital and was reported to be in stable condition.

Video footage from the hospital shows Abu Akleh’s colleagues crying out to her “wake up”, as her body lay in front of them.

In harrowing video footage taken at the scene of the moment Abu Akleh was killed, a series of gunshots can be heard before journalists start shouting for an ambulance.

Footage shows Abu Akleh, still wearing her press vest and helmet, lying face down in the ground below a tree, as another Palestinian journalist and Mondoweiss contributor Shatha Hanaysha hides behind the tree in attempts to shield herself from the bullets.

A visibly shaken Hanaysha attempts to reach out to Abu Akleh unsuccessfully. A young Palestinian man is then seen jumping over a wall behind Abu Akleh and Hanaysha. When he attempts to retrieve Abu Akleh’s body, another round of gunfire can be heard, and he quickly takes cover behind the tree.

Clearly depicts continued Israeli firing after Shireen Abu Akleh went down. Screams of “Ambulance”. One man tries to retrieve Shireen, others scream at him to move back from Israeli sniper range.

The young man then helps evacuate Hanaysha to safety, before attempting for a second time to retrieve Abu Akleh. The graphic footage shows the young man lifting her limp body up to reveal her face covered in blood.

She was evacuated in a private vehicle to a hospital in Jenin, where she was declared dead.

According to the Palestinian Journalists Syndicate, Abu Akleh is the 86th Palestinian journalist to be killed by Israel since the occupation of the West Bank, East Jerusalem and Gaza in 1967.

Since 2000, more than 50 Palestinian journalists have been killed, including six in the past two years, according to PJS.

‘They killed her in cold blood’

Following the killing of Abu Akleh, Israeli officials released a number of statements attempting to deflect blame, claiming instead that Abu Akleh was caught in the crossfire between Israeli forces and Palestinian gunmen, and was killed by Palestinian fire.

Eyewitness testimony of Hanaysha and other journalists at the scene, however, vehemently refute Israeli claims, testifying that the group were targeted by Israeli snipers that were stationed on rooftops in the area.

An injured Samoudi told reporters at the hospital in Jenin that “we were covering the raid of the Israeli occupation forces when they suddenly opened fire at us, the first bullet hit me and the other killed Shireen.”

“They killed her in cold blood,” he said. Samoudi emphasized that “there wasn’t any presence of Palestinian fighters in the area as occupation forces claim.”

Hanaysha told reporters outside the hospital that “we were a group of journalists, we were all wearing flak jackets marked as press, including Shireen. Shireen was also wearing her helmet [when she was shot]. It’s clear that whoever killed her was intending to hit her in an unprotected area,” she said, leading them to believe they were targeted by Israeli snipers.

“The area where we were was across from where the snipers were stationed,” Hanaysha continued, adding that when the young man in the video tried to help them escape, he was shot at, further entrenching the belief that the group of journalists were deliberately targeted.

"We were wearing flak jackets clearly marked as press."

Another testimony from a Palestinian reporter who witnessed the shooting said that the group of journalists made themselves known to the Israeli soldiers in the area shortly before they came under fire.

Abu Akleh was a Palestinian dual citizen. U.S. Ambassador to Israel Tom Nides said in a statement that it was “very sad to learn of the death of American and Palestinian journalist Shireen Abu Akleh… I encourage a thorough investigation into the circumstances of her death.”

In a series of statements on Twitter, the office of Israeli Prime Minister Naftali Bennett claimed that Abu Akleh was shot by Palestinian gunfire.

“According to the information we have gathered, it appears likely that armed Palestinians–who were firing indiscriminately at the time–were responsible for the unfortunate death of the journalist,” Bennett was quoted as saying in a statement.

The Prime Minister’s Office went on to publish a video purporting to show Palestinian fighters in the Jenin Refugee Camp shooting in an undisclosed location of the camp, alongside the caption “Palestinians in Jenin were even filmed boasting ‘We hit a soldier; he’s lying on the ground.’ However, no IDF soldier was injured, which increases the possibility that Palestinian terrorists were the ones who shot the journalist.”

Prime Minister Bennett on the sad death of veteran journalist Shireen Abu Akleh:
"According to the information we have gathered, it appears likely that armed Palestinians — who were firing indiscriminately at the time — were responsible for the unfortunate death of the journalist

Israel’s claims were quickly refuted, however, both by the testimony of eyewitnesses and Israeli human rights group B’Tselem.

B’Tselem’s field researcher in Jenin documented the exact locations in which the Palestinian gunman depicted in the video published by the Israeli government, as well as the exact location in which Journalist Shireen Abu Akleh was killed.

According to B’Tselem, the location of the video is a completely separate location than where Abu Akleh was killed, and that “documentation of Palestinian gunfire distributed by Israeli military cannot be the gunfire that killed Journalist Shireen Abu Akleh.”

This morning, B’Tselem’s field researcher in Jenin documented the exact locations in which the Palestinian gunman depicted in a video distributed by the Israeli army, fired, as well as the exact location in which Journalist Shireen Abu Akleh was killed. pic.twitter.com/6VbEJJuF7z

According to NBC foreign correspondent Raf Sanchez, an NBC reporter was able to geolocate the location where the Al Jazeera video, which shows the moment Abu Akleh was killed, was filmed.

The area of the Al Jazeera video “doesn’t match the alleyways shown in the video being put out by Israeli government,” Sanchez said.

Israeli video purports to show Palestinian gunmen shooting. But it doesn't show Abu Aqla at any point. Nothing in it confirms it's the moment the fatal shot was fired.

It also doesn't look like it's from same location as @AlJazeera video, which does show Abu Aqla's last moments. 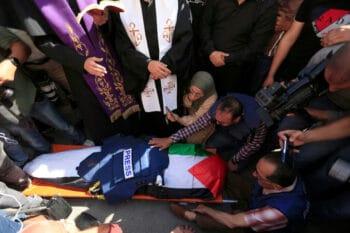 MOURNERS CARRY THE BODY OF AL JAZEERA REPORTER SHIREEN ABU AKLEH, WHO WAS KILLED BY ISRAELI ARMY GUNFIRE DURING AN ISRAELI RAID, DURING HER FUNERAL IN WEST BANK CITY OF JENIN ON MAY 11, 2022. (PHOTO: SHADI JARAR’AH/APA IMAGES)

According to Middle East Eye, in an interview on Army Radio, Israeli military spokesperson Ran Kochav said that “even if soldiers shot at–or, God forbid, hurt–someone who was not involved, this happened in battle, during a firefight, where this Palestinian is with the shooters. So this thing can happen.”

Kochav went on to describe Abu Akleh as “filming and working for a media outlet amidst armed Palestinians. They’re armed with cameras, if you’ll permit me to say so,” MEE reported.

Israeli foreign minister Yair Lapid said in a statement that ”we have offered the Palestinians a joint pathological investigation into the sad death of journalist Shireen Abu Aqla. Journalists must be protected in conflict zones and we all have a responsibility to get to the truth.”

Israeli investigations into the killing of Palestinians are few and far between, and are often closed without any findings or action being taken against the soldiers or officers responsible.

Palestinian officials said that an independent Palestinian autopsy would be conducted before Abu Akleh’s funeral. 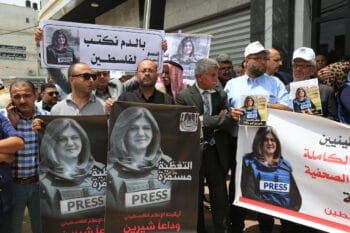 An outpouring of grief

Palestinian news networks and social media were flooded on Wednesday with an outpouring of grief from Palestinian officials, Abu Akleh’s colleagues, and ordinary Palestinians who grew up watching the veteran reporter on their screens.

Al Jazeera released a statement on what it called the “blatant murder” of Abu Akleh, saying:

violating international laws and norms, the Israeli occupation forces assassinated in cold blood Al Jazeera’s correspondent in Palestine, Shireen Abu Akleh, targeting her with live fire early this morning, Wednesday, May 11, 2022, while conducting her journalistic duty, clearly wearing a press jacket that identifies her a journalist, covering the Israeli occupation forces storming of Jenin refugee camp in the West Bank.

Al Jazeera Media Network condemns this heinous crime, which intends to only prevent the media from conducting their duty. Al Jazeera holds the Israeli government and the occupation forces responsible for the killing of Shireen. It also calls on the international community to condemn and hold the Israeli occupation forces accountable for their intentional targeting and killing of Shireen. 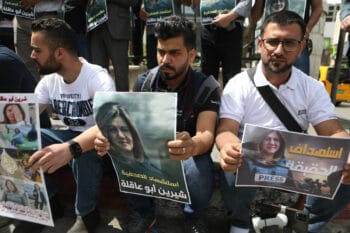 The Israeli authorities are also responsible for the targeting of Al Jazeera producer Ali al-Samudi, who was also shot in the back while covering the same event, and he is currently undergoing treatment.

Palestinian Prime Minister Mohammad Shtayyeh condemned the killing of Abu Akleh, saying she was killed “while carrying out her journalistic duty in documenting the horrific crimes committed by the occupying soldiers against our people.”

The Palestinian Foreign Ministry accused Israel of “intentionally and deliberately” shooting Abu Akleh and Samoudi, while PA spokesperson Ibrahim Melhem described the killing as a “comprehensive crime committed against a well-known journalist.”

Shireen was always my voice from the prison cells… Shireen was our voice. It is unbelievable. It is a crime, it is all clear–intentional and direct targeting. She was targeted. It’s clear.

The hashtag “Shireen Abu Akleh” was trending in Arabic, as Palestinians mourned the loss of the iconic journalist, who had been reporting on the ground in Palestine for Al Jazeera since 1997.\

In disbelief. Israeli apartheid forces killed Al Jazeera journalist Shireen Abu Akleh this morning while covering their invasion of Jenin. We grew up to her reporting on the second intifada. She was our voice. Rest in power and peace. Another day, another tragedy. https://t.co/FkaNdCTFUU

There hasn’t been a day in the past 20ys that I haven’t seen #Shereen_Abu_Aqleh reporting on #Palestine risking her life to show the truth that @AP and @BBCWorld didn’t want u to know & then she died just doing that. The pain burns hard rn.