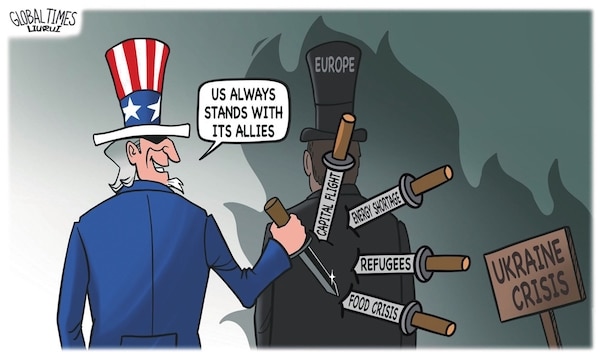 “Finland must apply for NATO membership without delay,” Finland’s President Sauli Niinisto and Prime Minister Sanna Marin jointly announced on Thursday. A similar announcement will come from Sweden on Sunday.

After its eastward expansion, NATO is moving northward, which might turn Europe into a new powder keg.

The term Finlandization, which refers to the policy of strict neutrality that Finland followed during the Cold War, has been brought up since the outbreak of the Russia-Ukraine conflict.

Maintaining neutrality has also brought many benefits to the development of neutral countries, including Finland and Sweden.

However, the two countries, which did not join NATO even during the Cold War era, decided to join the military alliance now. The move will result in, most directly, a boom in NATO’s power, forming a new acute challenge to Europe’s security order, observers noticed.

A crucial background is–when it comes to the European security architecture–there is no way to kick Russia out of the concept. Russia is there, right next to Europe, with a territory of about 17 million square kilometers, 145 million people as well as the world’s second-most powerful military. How is European security in any way enhanced by threatening Russia’s security? For Europe, it is simply not realistic to maintain the ongoing tensions with Russia.

After the end of the Cold War, the European security balance was broken, when NATO, which no longer had excuses to exist after the dissolution of the Warsaw Pact, not only stayed alive, but even obtained a new role as the military support of U.S. global hegemony. Worse, there was no other military organization in the world that could check and balance NATO. This is already a huge imbalance, Sun Keqin, a research fellow at the China Institutes of Contemporary International Relations, told the Global Times.

After several rounds of eastward expansion, NATO has absorbed quite a few members of the former Soviet Union. It has already been proved the bloc’s expansion has made Europe more dangerous instead of making it safer. Still, NATO welcomes another round of northward enlargement. Europe’s security imbalance will only deteriorate. The geopolitical map of Europe is being redrawn.

If Finland, which shares a 1,340-kilometer-long border with Russia–longer than the Russia-Ukraine border–joins NATO, it will be a dangerous escalation of the provocation right on Russia’s doorstep. The possibility of new conflict between Russia and NATO will only increase. Europe will get nothing but an even more fragile security status.

NATO may think it has strong conventional forces and economic power. But Russia retains thousands of nuclear warheads. This is its ace in the hole. That being said, a further provocation from NATO against Russia will jeopardize not only Europe, but also the world.

Finland and Sweden may now think that after joining NATO, they could receive protection from others. But be careful: Finland will be right at the forefront in the anti-Russia campaign. If anything goes wrong on the front line, Finland will be the first to face the consequences, Sun noted.

The fatal imbalance in the European security architecture has brought the continent to great disruption and catastrophe. This should offer a lesson to the Asia-Pacific.

After the end of WWII, the U.S. had always wanted to establish a global security framework to contain socialist countries. Yet the attempt has not worked out given contradictions between itself and its allies.

But very recently, South Korea’s national intelligence agency joined the NATO Cooperative Cyber Defense Center of Excellence as the latter’s first Asian member. Both South Korea and Japan were invited to the NATO Summit to be held next month. It may signal that U.S.’ Asian allies and NATO are forming institutional interactions. This is something to be vigilant about.

The U.S. and NATO, with strong logic of power politics, bloc politics and a Cold War mind-set, may apply its tactic of turning other regions into tinderboxes in the Asia-Pacific region. With the lessons drawn from the Ukraine crisis, Asia-Pacific countries should join hands in saying no to foreign interference in the region, and start building its own security regime, avoiding the crisis in Europe from taking shape on our doorstep.